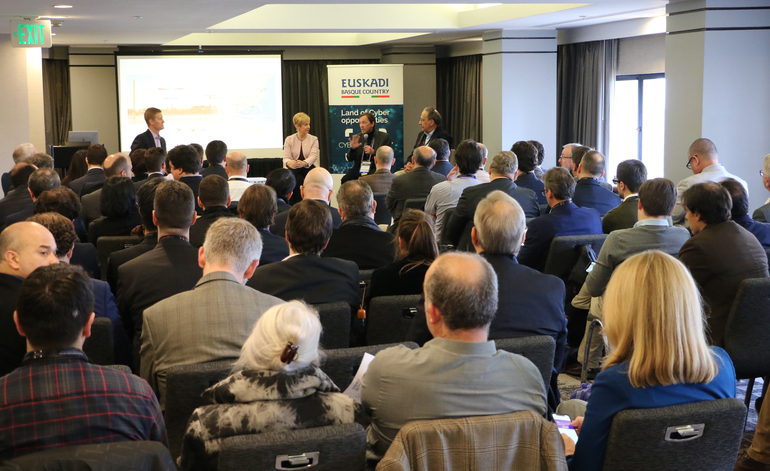 Under the “Basque Country: Land of Cyber Opportunities” slogan, the Basque Country was rolled out as an ideal place for entrepreneurship in the cybersecurity sector, given the strong existing industrial ecosystem and the Basque Government’s support for new initiatives with high technological value.

The delegates at the session on Tuesday 5 March were from Asia (Japan, Taiwan, the United Arab Emirates, Qatar and Israel), North America (USA and Mexico) and 8 European States. Special mention should be made of the participation of Dale Peterson, creator of S4, the most advanced and largest ICS (Industrial Control Systems) events in the world; Riaz Zolfonoon, speaker at several RSA Conferences and director of the company that set up the RSA Conference inn 1991; and Gorka Sadowski, a Research Director in Cyber Security for Infrastructures at the Gartner Group.

After the event was opened by the BCSC Director, Javier Diéguez, the initial panel featured the aforementioned three speakers, along with the Basque Government’s Minister for Economic Development and Infrastructures, Arantxa Tapia.

That panel was followed by input from Panda Security, Hdiv Security, SealPath, CounterCraft, Redborder, Enigmedia and Alias Robotics, as companies with a disruptive technology profile that exemplify the potential of the Basque cybersecurity ecosystem. A further five Basque cybersecurity suppliers (S21sec, Entelgy Innotec, Ingecom, Ironchip and PwC) were also in the room to support the session, along with two technology centres (BCAM and Innovalia) and Iberdrola, the Basque electricity company.

Indeed, the very next day, on the Wednesday, the Basque company Enigmedia took third prize at the International Pitch Competition organised by Bwtech@UMBC (University of Maryland Baltimore County).  Enigmedia competed against opponents from Israeli, Sweden and Australia, among others, and where another Basque company, Alias Robotics, was also a finalist.  The BCSC had been working with both companies on this opportunity since the start of the year.

The Basque Cybersecurity Centre and its strategy to showcase the Basque cybersecurity market internationally, continue to bear fruit as shown at the start of this year when Javier Diéguez, the centre’s director, was appointed by the European ECSO as co-director of Work Group Number 2. This appointment has helped to put the Basque Country in the international spotlight, in order to position it in the spotlight to attract investment, and thus demonstrate that it is an ideal region to set up companies related to this sector and where the strong industrial ecosystem plays a key role in the appearance of new opportunities.

Furthermore, special mention should be made of other Basque Government backed initiatives, such as the launch of the third BIND 4.0 programme, which seeks to develop new technology projects of start-ups and with the backing leading international companies, the deployment of the   Basque Digital Innovation Hub, by the BCSC in conjunction with members of the Basque Network of Science, Technology and Innovation, and the  Industrial Cybersecurity Grant Programme that distributed over a million euros among 102 manufacturing companies.