Gestamp to set up its Industry 4.0 Centre in the Basque Country and to run R&D&i projects on the Battery Box for the Electric Vehicle

Embed video
Download mp4 video set (zip)
Gestamp to set up its Industry 4.0 Centre in the Basque Country and to run R&D&i projects on the Battery Box for the Electric Vehicle Source: Irekia 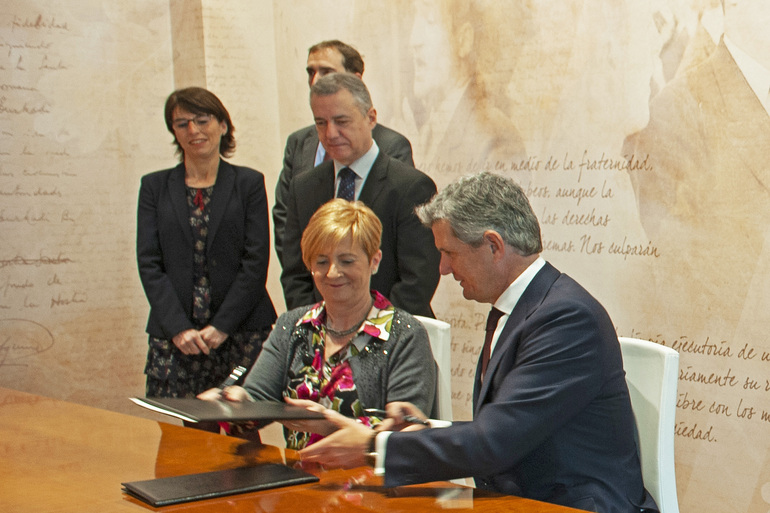 Gestamp has thus undertaken to turn its research and development unit in the Basque Country into a benchmark centre in the areas of weight savings, electric vehicles, chassis and hot stamping. The Group will develop the R&D&I area dedicated to the Battery Box for the electric vehicle. It will also set up and develop the flagship Industry 4.0 Centre for the Group.

Given the strategic relevance of the automotive sector in the Basque Country, the Basque Government believes that this R&D&i project partnership agreement will help to make Basque companies more competitive and, ultimately, to create social and economic wealth.

Once the agreement had been signed, Minister Arantxa Tapia appeared before the media.

The minister stressed the need to adapt all types of vehicles to an energetically viable and accessible mobility, known as BASQUE MOBILITY: the diversification of energy sources to progress towards more sustainable transport. A process where, according to Tapia, technological advances are essential. In that regard, Tapia recognised that a balance needs to be found between all the stakeholders involved so that the adaptation is progressive and viable. The Minister pointed out that the Basque Government is working with the sector on a road map in order to be able to move towards a model where all the stakeholders are well prepared.

The Minister also stressed that both parties are committed to combining synergies in investment, caring for and driving new technological development In this regard, Tapia highlighted private-public partnership. According to the Minister, a country cannot achieve technological progress without the commitment of private initiative. Furthermore, she stressed that the public sector has not waned and money in the form of grant programmes has increased by around 6%, with over €200 million in subsidies envisaged for 2019.

The Gestamp group is one of the global leaders in automotive components. A member of the Basque Science, Technology and Innovation Network, it has six plants in the Basque Country and one of its main R&D&I centres is located in the territory.