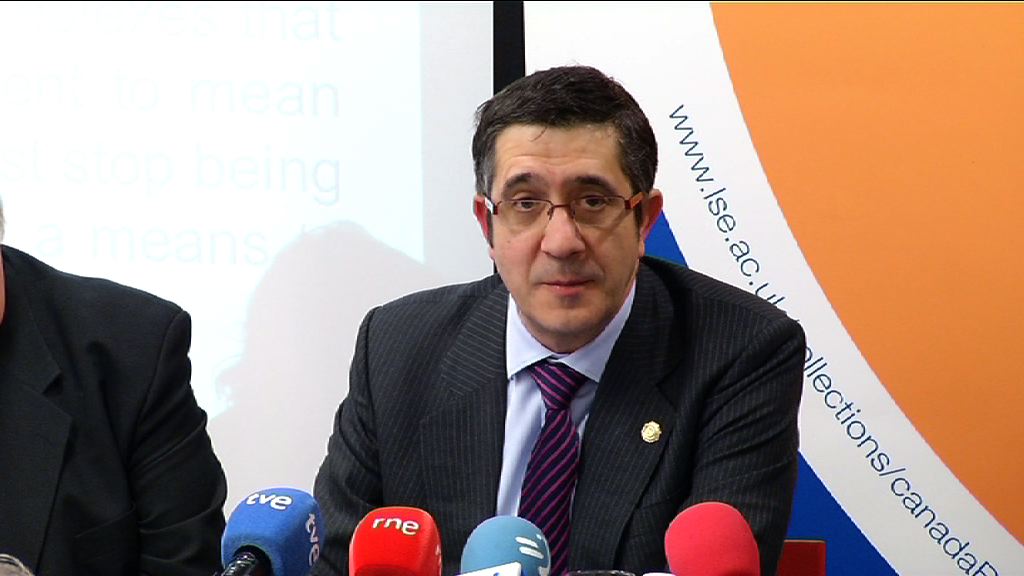 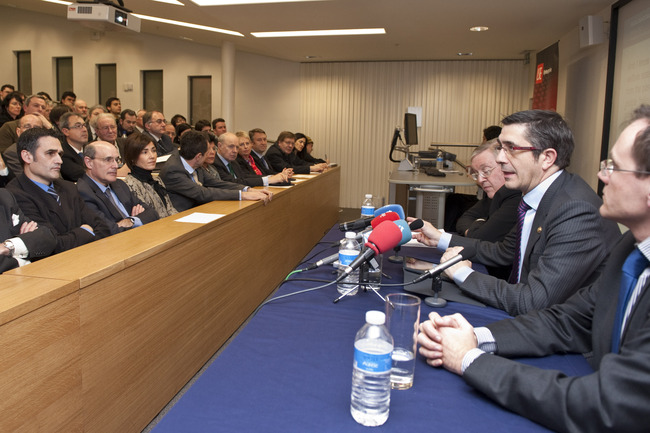 During his visit to London, the Lehendakari dismissed the "romantic myths" that exist in the British Isles regarding the ETA terrorist organisation and defended the validity of the welfare state against "failed" neo-liberalism.

The welfare state and its role as a protector of public services and social policy, especially during periods of economic crisis, was the main theme of the talk given at the London School of Economics by the Lehendakari, Patxi López. He called on Europe's social democrats to lose the "prejudices they have built up", as the social model of neo-liberalism has "failed". "We must, in the face of those who wish to dismantle them, recover the old social values of shared effort, internal solidarity and the definition of common goals we can all contribute to and which will give us hope for the future", he said to those present in the packed lecture hall. During his visit to London the Lehendakari also wanted to dismiss the "romantic myths" regarding the ETA terrorist organisation, and stated that "we are reaching the end of this nightmare". He went on to emphasise that "this is the direction they are moving in, and it is great news. Let me also say to you that what has brought us to this point is firm, democratic government; a state that abides by the rule of law; a zero-tolerance policy towards any expression of violence or support for violence; unity; and the rejection of violence by society.

"The Basque Country is more than just terrorism: we are a small region with big objectives". With comments such as these the Lehendakari, Patxi López, attempted to shatter the stereotypes with which history has burdened the Basque Country and instead provide the diverse audience that filled a lecture hall at the London School of Economics with an insight into the modern-day Basque Country. The Lehendakari's talk focused mainly on issues relating to ideology and the economy, as he explained his commitment to the welfare state and to increasing citizen participation in decision-making via the principle of shared responsibility. He also indulged the curiosity of those present who wanted to hear his opinion on the current political situation in the Basque Country.

Regarding the latter, the Lehendakari was unequivocal when it came to explaining the processes that have led to the current situation involving a truce with the ETA terrorist organisation and the arrival of a new, nationalist, left-wing political entity. He described these events as "great news", before going on to emphasise that "what has brought us to this point is firm, democratic government; a state that abides by the rule of law; a zero-tolerance policy towards any expression of violence or support for violence; unity; and the rejection of violence by society". The Lehendakari made clear his belief that "we are reaching the end of this nightmare".

He went on to explain that "an era of democracy and political plurality" has begun in the Basque Country, and that to ensure its continuation the Basque Government will work tirelessly in the three key areas of justice, truth and democracy. "The Basque Country is more than just terrorism: the Basque Country is a modern society that does not want to lag behind the pace of global progress. We are a small region with big objectives and we have begun comprehensive reforms that will enable our society to adapt to the requirements of the 21st century. We want the Basque Country to be a place where citizens are free, a place where there is solidarity, a place that is sustainable and competitive", he affirmed.

Before venturing into an analysis of the current political situation, the Lehendakari introduced the subject of the welfare state and the role of social democracy in defending and rebuilding it. "There are things that we have done badly", he admitted, before going on to demand "an answer" to the current economic crisis from the collection of parties on the left. "We know that neo-liberalism has failed", he said, "and social democrats must lose the prejudices they have built up" in order to "visualise public management as an arena for reform and social change".

This reform and social change should, claimed the Lehendakari, be extended to include the concept of what the welfare state really is. In his opinion, this concept should be based on "the level of progress and wellbeing that we want as a society" and "the way in which sufficient resources can be harnessed to achieve it", not on the idea that "these are the resources we have and so this is as far as our welfare state, public services or social policies can go".

López went on to highlight some of the measures that need to be taken in this area, such as "creating economic growth; having healthy public accounts to safeguard against future crises; encouraging citizens to be responsible and not to use benefits or public services abusively or fraudulently; ensuring efficient, prudent government that does not waste public resources; and having an adequate level of taxation to ensure the system functions correctly".

"For me, the debate over taxation is not just an economic debate: it is a political and social debate, too, because the fundamental question we have to ask ourselves is not how much tax we want to pay but what services we want to have. What type of education system, what type of health service, what type of welfare provision, what type of infrastructure, what type of justice system - and how to pay for them", he explained.

The Lehendakari also called for a more active role for citizens and said that the reasons for the "necessary reforms, some of which are painful" must be explained to them. The reforms, which are necessary to maintain the welfare state, have already begun to be implemented in the Basque Country: business and industrial sectors are undergoing reform, along with the health service; knowledge is being developed in schools thanks to the commitment to tri-lingual education; Open Government initiatives are being implemented; and public and social benefits are being transformed into real policies. "We know what we want and we are willing to make the efforts required to achieve it", the Lehendakari concluded.