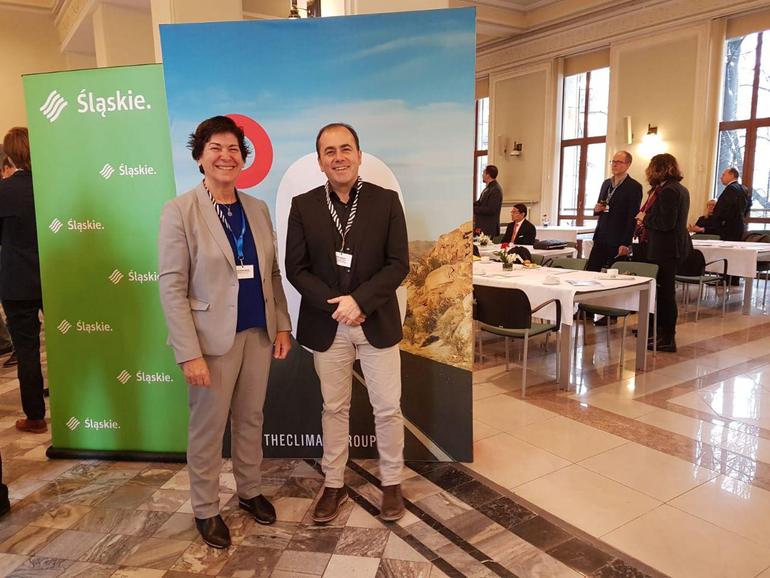 The Basque Country is one of the most active European regions in the fight against climate change and, as such, is this week attending the COP24 climate summit in Katowice (Poland) in order to reaffirm its commitment in that regard. The Basque delegation is taking part in order to assert the role of local and regional governments and, specifically, in territorial adaptation actions, beyond the official agenda of the States at this type of international summits.

Basque Government delegation is led by Elena Moreno, its Deputy Minister for the Environment. From today, Tuesday, to Thursday, the delegation will be an observer at the summit, in which 190 countries are taking part, including government representatives, non-governmental organisations, the scientific community and the business world.

The Basque Government’s first meeting in Katowice was held today, as part of a session of The Climate Group, and specifically with the other members of the Under2 Coalition, which is driven by a group of state and regional governments committed to keeping global temperature rises to under 2 ºC. In total, this group is made up of over 220 administrations that account for 43% of the global economy. The slogan of today’s meeting in Katowice was ‘Together for Change’.

Interview with the Deputy Minister

The Basque delegation’s agenda continues tomorrow, Wednesday, with the Deputy Minister appearing at the Climate Action Studio.  During the COP24 summit, that channel is conducting nearly 100 interviews at Katowice with key stakeholders within the summit, including government leaders and NGO officials, UN agencies and other observers. The channel has been set up to allow those key players to share their perspectives, their success stories or examples of partnerships that help to comply with the objectives of the Paris Agreement.

Elena Moreno hopes that the governments will make “the major decision” in Poland to commit to limit warming to 1.5º, as envisaged in the latest special report from the Intergovernmental Panel on Climate Change (IPCC). In that regard, the Basque Government will play an active role by asserting that "a scenario that postpones the decisions and renounces putting a stop to warming is not acceptable", according to the Deputy Minister.

The Basque Government is taking this opportunity to explain the climate change adaptation policies that it is triggering. On the one hand, there is the Klima 2050 Climate Change Strategy, which was approved in 2015 and sets the way to carbon neutrality by 2050, in other words, to reduce emissions to the amount that can be reabsorbed, and it also proposes measures to make the territory more resilient. And on the other hand, the Basque Country's commitment is materialised in its membership of international networks such as nrg4SD, The Climate Group and the Pyrenean Climate Change Observatory.

The Basque Government’s schedule in Katowice will conclude on Thursday, with the nrg4SD meeting, which will address the adaptation to the Sustainable Development Goals (SDGs) set by the UN. In that context, Aitor Zulueta, the Natural Heritage and Climate Change Director, will be one of the speakers and will explain the Basque case and the actions being implemented.

Registrations for ‘Change the Change’

In Katowice, the Basque Government will showcase the International Climate Change Conference, which under the title ‘Change the Change’ will gather together over 600 experts in San Sebastián from 6 to 8 March. In fact, the nrg4SD network is supporting the event by holding its Annual General Assembly in Bilbao on 4 and 5 March in the run-up to the conference. The deadline for the early bird discount ends this week on 15 December.