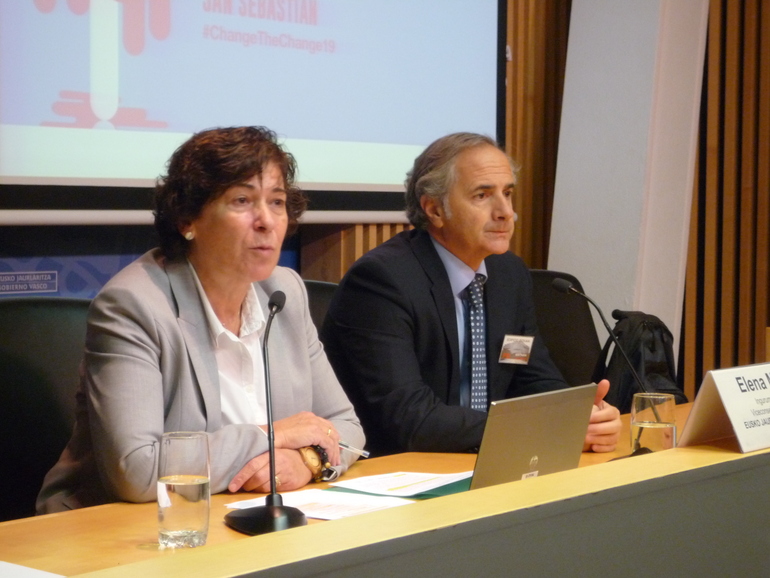 San Sebastián and the River Nervión estuary are two Basque urban areas that are vulnerable to the rising sea levels. In Bermeo, there is a risk of damage to the port area, among other phenomena, due to the higher average sea levels and to the tides. Zarautz is another vulnerable location, where there is a risk of flooding due to the swell. These four cases are specific examples of how climate change is affecting the Basque Country. And there are more. They are being studied by the Kostegoki project, led by the Basque Government through Ihobe and cofounded by the Spanish Central Government, in which AZTI-Tecnalia, the Bizkaia and Gipuzkoa Provincial Councils, Ura and the Basque Government’s Port and Maritime Affairs Directorate are taking part.

Climate change and its impact on coastal and marine ecosystems is one of the greatest challenges facing our society and the Basque Country is not detached from this problem: 55% of the population is concentrated in two coastal supramunicipal districts that account for less than 10% of the territory: Gran Bilbao and Donostialdea.

The rise of the average sea level will have significant impacts on coastal areas. The average level has already been seen to have risen 7 centimetres between 1992 and 2017, at a rate of 2.8 millimetres a year. This rise is significantly lower than the one predicted for the rest of the 21st century, between 45 and 65 centimetres, which means a rising speed of 4.5 to 6.5 millimetres per year.

The Kostegoki study analyses the vulnerability, risks and adaptation of the Basque coastline and its aim is "to enhance the efficiency and resilience of the territory over the coming decades”, a goal that is part of the Climate Change Strategy of the Basque Country to 2050 (Klima 2050).

Iñigo Losada, at Change the Change

One of the leading experts in this field in Spain is Iñigo Losada from Bilbao. As the Director of Research at the Environmental Hydraulics Institute of the University of Cantabria, Losada headed a pilot scheme in Asturias aimed at opening up the way to a new climate change  adaptation strategy for the Spanish coast.

That work, among others, has made him an essential figure for all scientists seeking to assess the risk (combination of threat, exposure and vulnerability) that climate change is for our coasts and their socio-economic and environmental values.

Losada today outlined the project's results during a talk organised by the Basque Government’s Ministry for the Environment, Territorial Planning and Housing. The expert from Bilbao, who has won the Jaume I Environment Protection Award, will play a prominent role at the International Climate Change Conference to be held in San Sebastián from 6 to 8 March.

During that event, entitled Change the Change, Losada will discuss the impacts on the coastal systems. The conference will also bring together some of the leading international experts on climate change. These include Nicholas Stern, the eminent British economist, along with Bunny McDiarmid, Executive Co-Director of Greenpeace International, and Manuel Pulgar-Vidal, Energy and Climate Leader at the World Wildlife Fund (WWF International).