Vitoria-Gasteiz, a "showroom" for electric vehicles 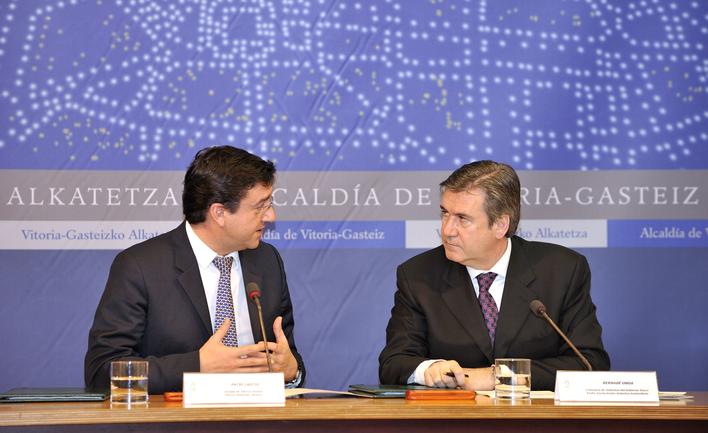 • The aim of the agreement is to promote and foster the use of electric vehicles in Vitoria-Gasteiz.

• It envisages the design and implementation of a network of car parks and charging points in public spaces as well as the foundation of a car-share company responsible for deploying electric vehicles around the city.

• One of the most significant actions will be the construction and development of an Electric Mobility Centre in a central location, which will be used as an information and exhibition centre for electric vehicles.

The mayor of Vitoria-Gasteiz, Patxi Lazcoz, and the Basque Minister for Industry, Innovation, Tourism and Trade, Bernabé Unda, in his capacity as the President of Ente Vasco de la Energía (Basque Energy Agency - EVE), signed a collaboration agreement today to boost and foster the use of electric vehicles in Vitoria-Gasteiz. This is the first time that EVE has signed an agreement specifically for the deployment of electric vehicles with a city council.

The Agreement is a commitment by both institutions to implement actions to overcome barriers and facilitate the use of electric vehicles in Vitoria-Gasteiz. These actions include:

- The installation of charging points in car parks and on public streets (covered and open-air) with the aim of ensuring that drivers can always recharge their electric vehicles.

- The launch of an 'e-car sharing' company with a fleet of electric vehicles to offer customers a more efficient means of mobility.

- The construction and operation of an Electric Mobility Logistics Centre in 2011, which will be used as an exhibition and information centre for electric vehicles and a symbol of this modern and environmentally-conscious city.

- The incorporation of electric vehicles when different types of municipal fleets are renewed (passenger vehicles, motorcycles, road sweepers), in cases where this is possible in terms of market supply and suitability.

- The drafting and enforcement of municipal bylaws to favour the use of electric vehicles over other less efficient vehicles that cause more pollution.

Vitoria-Gasteiz was elected European Green Capital in October thanks to its Green Belt project, mobility plan, cycle routes... In a similar vein, the objective of the Sustainable Mobility and Public Spaces Plan is to reduce the use of private vehicles. The aim is to encourage the use of public transport and, consequently, to increase the number and size of public spaces available to pedestrians, which would also mean a reduction in the amount of space for vehicles. Within this framework, electric vehicles are preferred over conventional, more polluting, vehicles.

Therefore, today's Agreement between the City Council of Victoria-Gasteiz and the Ente Vasco de Energía is a significant milestone in the development of policies to promote energy efficiency and sustainability within both entities and it paves the way for other municipalities to promote electric mobility through initiatives and actions similar to those to be implemented in Vitoria-Gasteiz as a result of this Agreement.