Minister Artolazabal will open next Monday the "Ist International Employment Congress, challenges for a big change", in Vitoria-Gasteiz 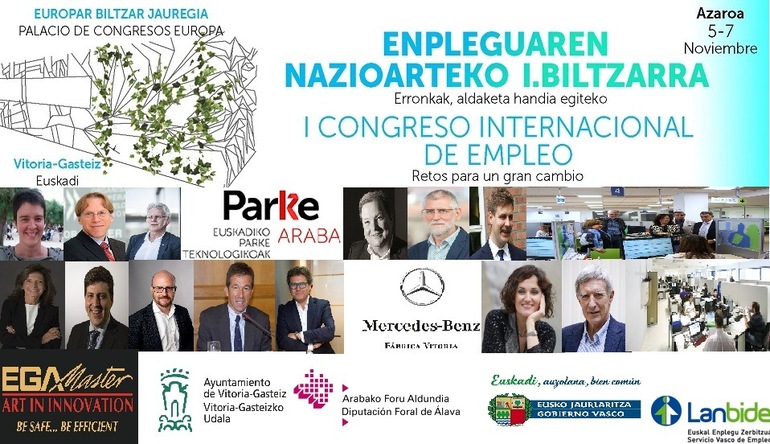 Artolazabal believes that the appointment will also serve to deepen "the impact of the digitalisation favoring work beyond companies", "because the structures of employment, training processes, production and new globalized markets, these days know a great change for which we have to prepare taking on the challenges and opportunities that are going to be presented".

According to the Sailburu (Minister in Basque language), "automation, new communications and logistics and digitalization are settling in the labor market and with that change the current notion of work and forms of organization. The challenge of the companies, hardworking and responsible people that define the policies of employment promotion, is the identification and assumption of knowledge and skills".

"The dedication and participation in the company, the local and global offer; the platforms; creativity and initiative, and flexible labor organizations are other aspects that will be addressed during these three days in Vitoria" said Mrs Artolazabal.

The Minister will be accompanied by the highest representatives of the territory and the city during the opening ceremony of the Congress: Ramiro González, Deputy General of Araba / Álava, Gorka Urtaran, mayor of Vitoria-Gasteiz. Together with them, Jamie Hepburn, Minister of Employment and Vocational Training of Scotland and Sylvain Giguère, Chief of the OECD Division of Economy and Local Employment (Organization for Economic Cooperation and Development), will be the main protagonists of the first day, dedicated to the 'Changes in the world and its impact on employment. Public employment policies. Richard Wilkinson, founder of The Equality Trust, and Marc Vidal, analyst of digital transformation and innovation, are the other two speakers of the first day. Day that will conclude with the visit to the Aernova plant  and the Miñano Technology Park.

On Tuesday, the day will be framed under the heading The future of employment and inclusion policies. The future of employment, and will be attended by Fons Leroy, president of the European Network of Public Employment Services, Carsten Beck, director of the Copenhagen Institute for Future Studies, Isabel Aguilera, strategy and innovation consultant and professor at ESADE and the University of Deusto and Borja Belandia, Managing Director of Lanbide. Mercedes and Ega Master are the companies that will be visited that day.

The final day, which will be held on Wednesday under the title The role of job-generating agents will have as exponents Montserrat Pardo, Director of Institutional Relations of Microsoft Ibérica, Fredrik Söderqvist, member of the Swedish syndicate Unionen, Jordi Serrano specialist in systems of information and development of people and founding partner of Future for Work Institute, Juanjo Alvarez, professor of private international law of the UPV / EHU and Saioa Arando, of the Department of Social Economy of Mondragon University.