Lehendakari Urkullu meets with the President of Argentina, Mauricio Macri 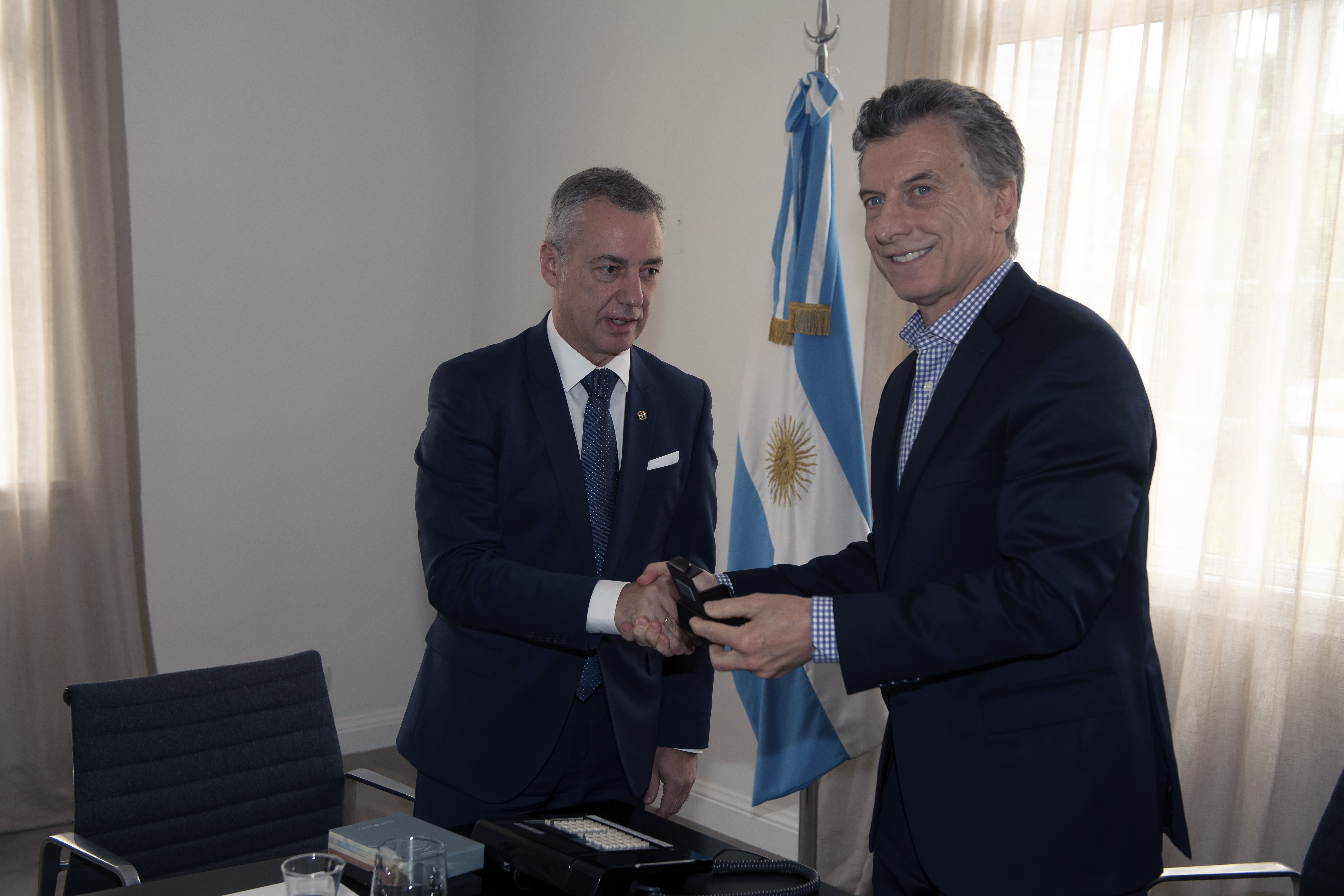 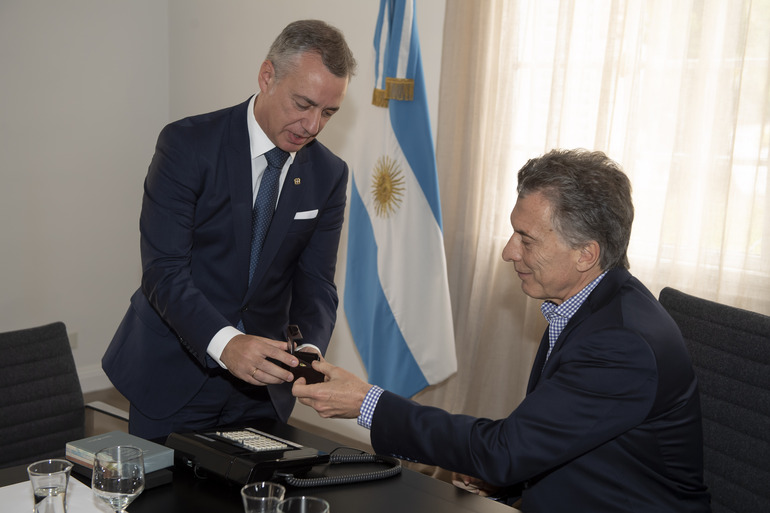 Lehendakari Iñigo Urkullu, the Basque Premier, met with the President of the Republic of Argentina, Mauricio Macri, at midday at the Quinta Los Olivos, the President’s main residence, during the Lehendakari’s official trip to Argentina. The Lehendakari had earlier met with the Minister for Production and Labour, Dante Sica, and they had agreed to study the different possibilities for Argentine and Basque companies to jointly take part in public calls to tender in both countries.

These two meetings marked the first stage of the official trip (Buenos Aires) prior to the delegation travelling to Mar del Plata where it will take part in the "Basque National Week".

The Lehendakari said it was an “honour” to have met with the President of Argentina. During the meeting, the Lehendakari thanked President Macri on behalf of the whole of Basque society for Argentina’s welcoming of Basque in the past.

They discussed the impacts of the economic crisis and President Macri was interested in the Basque approach to address it. The Lehendakari explained that the Basque Government’s focal points are economic revival and social cohesion.

They also expressed their interest in business and economic collaboration, where Argentine and Basque companies can move forward together. As the Lehendakari explained, the aim is for Basque companies to come to Argentina for industrial and also tourist purposes, as well as to act “as a bridge for Argentine interests in continental Europe”.

Mauricio Macri thus joins the list of Heads of State or political leaders with whom the Lehendakari has held meetings.  Last year, Lehendakari Urkullu met with the Secretary of State of the Vatican, Pietro Parolin, the President of the European Commission, Jean-Claude Juncker, and the President of Columbia, Juan Manuel Santos. The Basque Government’s aim for such meetings and official trips is to continue showcasing the Euskadi-Basque Country Internationalisation Strategy.  The goals are, on the one hand, to portray a positive image of the Basque Country and, on the other hand, to open up the way to new cultural, social, economic and institutional relations.

Minister for Production and Labour

First thing in the morning, the Basque Government delegation led by the Lehendakari met the Argentine Minister for Production and Labour, Dante Sica. Lehendakari thanked the Minister for his interest in the industrial and economic reality of the Basque Country and pointed out that they had agreed areas of collaboration and a work timeline. The Lehendakari stressed that they will study different possibilities for Basque and Argentine companies to jointly take part in public calls to tender in both countries.  They will also to work to enable alliances in industrial sectors, such as energy, oil & gas and the railway sector, along with pooling knowledge in science and technology.

The Lehendakari explained that even though the foundations had already been laid, they had agreed to intensify relations within one month. In fact, an Argentine Government delegation will travel to the Basque Country in the coming weeks to learn firsthand about the industrial and economic characteristics and start to work together in the envisaged areas.

In the afternoon, the delegation led by the Lehendakari will travel to Mar de Plata, which is hosting the “Basque National Week”. It is the main annual event for the members of the Basque community in Argentina. The organisation of this event rotates among the Basque centres of the country and this year's host is the "Denak Bat" euskal etxea (Basque centre), which is also celebrating its 75th anniversary.

Once there, the Lehendakari will take part in the closing session of the South American Euskal Etxeak Regional Meeting and in the opening ceremony of the Basque National Week.