Japan shares its strategy to progress towards Society 5.0 with the Basque Country 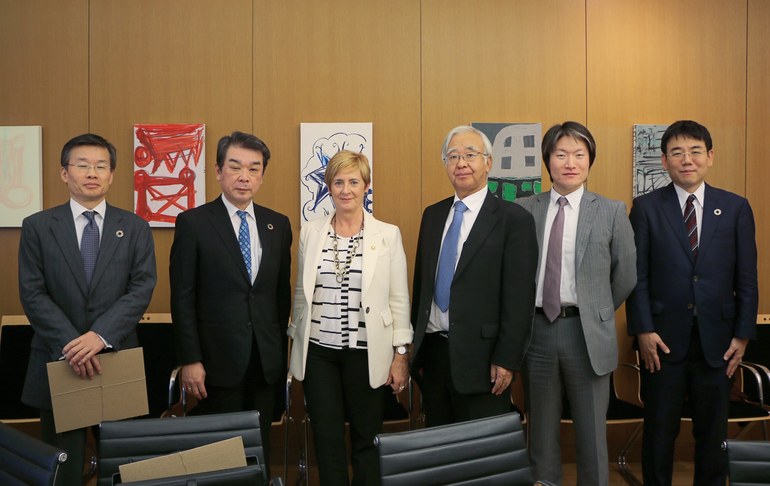 Japan is immersed in transforming the country and both companies and public institutions are working on strategies and policies to make the country a world leader in creating a “super smart society”. The so-called Society 5.0 represents a perfectly connected, highly efficiently and inclusive society that fully integrates the cyber world and the physical world.

In Tokyo, the Basque Government delegation has learnt about the initiatives underway in this field both by public institutions and in the private sector. The Basque Government’s Minister for Economic Development and Infrastructures, Arantxa Tapia, along with the Deputy Minister for Industry, Javier Zarraonandia, the SPRI General manager, Alex Arriola, and the Director of the Basque Internationalisation Agency, Ainhoa Ondarzabal, met today with representatives of the Japan Business Federation – KEIDANREN.

KEIDANREN brings together 1,376 of the country’s representative companies, 109 national industrial associations and 47 regional economic organisations.  Its mission is to harness the vitality of the companies, people and local communities to support the corporate activities that contribute to the development of the Japanese economy and to improving the quality of life of Japanese society as a whole.

The initiative underpinning KEIDANREN’s work is focused on reconstructing Japan by achieving Society 5.0. They are instigating exhaustive reforms and adaptations in areas such as the public administration, the legal system, technology, business organisation, work and education.

In the coming hours, the Basque delegation will also meet the Japanese Government's Cabinet Office, which is leading an ambitious plan to expand the use of Internet networks in all areas of life. They plan to move on from manufacturing to other fields to foster economic growth, ensuring a healthy society with long life expectancies, and social transformation.

The academic world, industry and government are working closely together to achieve those goals.

The Minister has also met with senior executives from NEDO, the New Energy and Industrial Technology Development Organisation. Following on from the visit of NEDO representatives to Bilbao last summer, today’s meeting was the opportunity to stress the capacity of Basque industry in the field of renewable energies, particularly wind power, and to showcase the markets and technologies where the Basque Country is the leader. During the meeting, both NEDO and the Basque delegation analysed the potential synergies and partnerships between Japanese and Basque companies.

NEDO generates and manages the R&D policies and grants in Japan, with two missions: to establish the energy policy by means of renewable energies and to improve industrial technology.

During their time in the Basque Country, they visited Haizea Wind or Windbox.

In the coming days, the delegation, along with the members of the Basque Automotive Cluster – ACICAE, will visit the Honda, Toyota and Bridgestone plants, where they will analyse the three companies' future projection for the automotive sector.

On Thursday, the Minister will be at the opening of the new Gestamp plant in Japan.