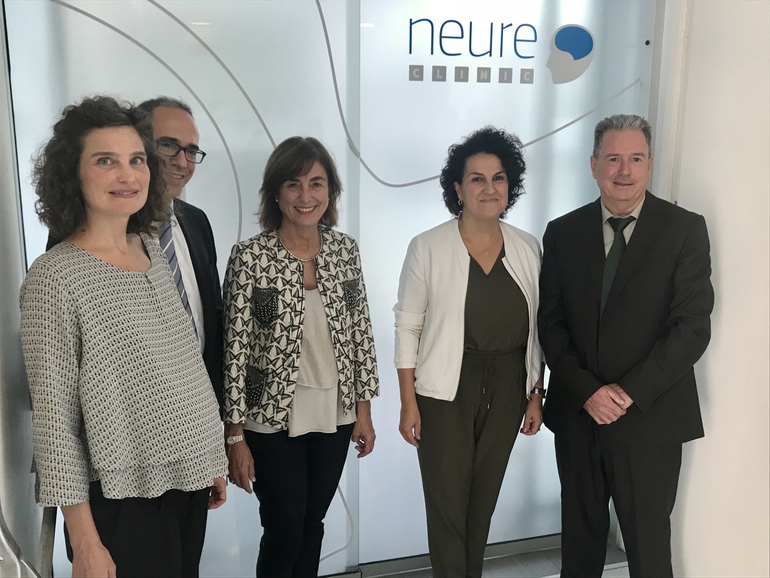 The Basque Center on Cognition, Brain and Language (BCBL) has today officially opened Neure Clinic, its advanced diagnosis clinic. Located in the facilities of the San Sebastián centre, its main goal is to provide exhaustive diagnosis and assessments in the field of language disorders, such as dyslexia, the specific language impairment (SLI).

The Basque Government's Minister for Education, Cristina Uriarte, and the Gizpukoa Provincial Councillor for Economic Promotion, the Rural Environment and Territorial Balance, Ainhoa Aizpuru, spoke during the opening ceremony, held at the BCBL facilities this afternoon.

Representatives of the BCBL founding partners, which include Ikerbasque, Innobasque, Gipuzkoa Provincial Council and the University of the Basque Country (UPV/EHU), along with the Basque Government, and representatives of different associations of families and children affected by language disorders, also took part at the event. Those associations include TEL Euskadi, which was one of the donors to help set up the clinic. These and other associations had the opportunity to look round the Neure Clinic facilities.

“The clinic is opening today with a very ambitious objective: to become a benchmark not only in the Basque Country, but also in the Spanish State. Thank to the research work by the BCBL in recent years, the Neure team will be able to conduct a full neuropsychological appraisal, which is fundamental to proceed to an intervention plan aimed at the specific needs of each child,” Manuel Carreiras, the BCBL Director, stressed today.

“We want Neure Clinic to help speech therapists and therapists, by providing, in addition to an advanced diagnosis, a series of intervention guidelines to treat the people affected by the different disorders,” explained Nekane Galparsoro, the clinic’s manager.

Minister Uriarte then wanted to stress science’s contribution to society: “The years of experience and all the knowledge acquired by the BCBL are going to yet again serve society, through this clinic. There can be few things that provide greater satisfaction than helping those children. (…)During that time, the Basque Government has been firmly committed to research and we are going to continue on that same track, as that is what our society wants”.

Neure Clinic came into being as a BCBL knowledge transfer initiative in order to pass on to society part of the scientific developments produced by the centre, by providing the market with a service for the advanced diagnosis and assessment of development, learning and language disorders.

In this regard, the clinic's main work will be to help speech therapists and therapists to diagnose the different conditions, by providing advanced speech and neuropsychological assessments that consider the different language, socio-emotional and cognitive aspects involved.

Therefore, Neure Clinic uses innovative assessment methods that include the latest advances from the BCBL team and which will allow all the aspects of language impairment, in both Spanish and in Basque, to be measured. At the same time, the data obtained will be added to the databases that will allow progress to be make of the scientific knowledge of the different conditions.

10 years researching the secrets of the brain

The opening of the clinic coincides with the 10th anniversary of the BCBL, which has a first-class reputation on the internal map of neuroscience and language disorders.

Proof of this are the results obtained in its first decade, when the centre’s figures include over 400 researchers from 25 different nationalities, over 450 scientific publications in leading international magazines, a score of 20 international congresses organised, 75 funding lines and 120 research grants achieved, the participation of over 30,000 volunteers in its research, and a competitive economic return of over EUR 25 million, which means a self-financing average of around 65%.

Thus, the BCBL has been established as an international benchmark centre in the field of cognitive neuroscience research, which is in line with the current Basque Science, Technology and Plan (PCTI) and the priorities established to develop the Basque Government’s Scientific Policy.  It is therefore supporting, driving and facilitating the use of science, technology and innovation as a tool to improve the competitiveness of the business fabric and Basque social development.

The Basque Center on Cognition, Brain and Language is a world-class interdisciplinary research centre based in San Sebastián for the study of cognition, the brain and language, driven by the Basque Country to foster science and research in the Basque Country. The centre, which is one of the BERC (Basque Excellence Research Center), belongs to the Basque Network of Science, Technology and Innovation (RVCTI), and whose partners include Ikerbasque, Innobasque, Gipuzkoa Provincial Council and the University of the Basque Country/Euskal Herriko Unibertsitatea (UPV/EHU).

Furthermore, the centre, which has held the “Severo Ochoa” accreditation of excellence since 2016, focuses its activity on 3 lines of research: reading, language and development disorders; multilingualism and learning a second language, and neurodegeneration, brain damage and healthy ageing.