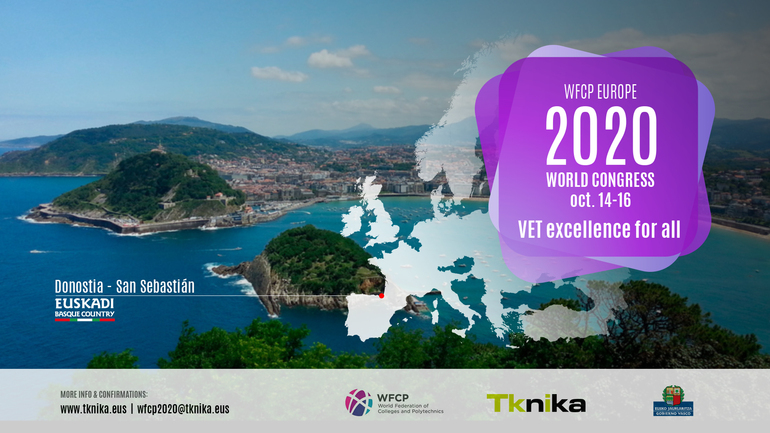 The board of directors of the World Federation of Colleges and Polytechnics (WFCP) has just announced its decision to accept the candidacy presented by the Education Ministry of the Basque Government for the next WFCP World Congress to be held in the Basque Country, specifically in the city of Donostia-San Sebastián. The announcement was made at the World Congress currently underway in the Australian city of Melbourne.

The candidacy, drawn up by the Vice-Ministry of Vocational Education and Training and coordinated by Tknika, has received the backing of more than 30 international organisations, notably the EFVET (European Forum for Technical and Vocational Education and Training), the ILO (International Labour Organisation) / Cinterfor, or the UNESCO-UNEVOC International Center. Note should be taken that the 2020 Congress, to take place in the Basque Country, will be particularly important due to the fact that it is the tenth World Congress.

World Federation of Colleges and Polytechnics

The WFCP is an international network of VET centres and associations of centres which seeks to lead training policies and contribute lines of action for the benefit of the global economy. Outstanding among its actions are holding, every two years, the WFCP World Congress. At this gathering, educators, political heads and leaders in education gather to analyse the latest trends and best practices and to establish collaborative networks for promoting professional and technical training.

Thus, the meeting to be organised in San Sebastián will have special relevance. In 2020, Europe will have the opportunity to corroborate the extent to which the objectives marked for the 2010-2020 period have been met, while defining the strategy to back and promote Centres of Excellence; a challenge which will involve cooperation with centres all over the world.

Furthermore, the heads and leaders attending the congress will have the possibility to analyse the extent to which the Sustainable Development Goals defined for the period 2015-2030 have been met. Undoubtedly, the VET sector worldwide holds a great deal of responsibility in fulfilment of the SDGs.