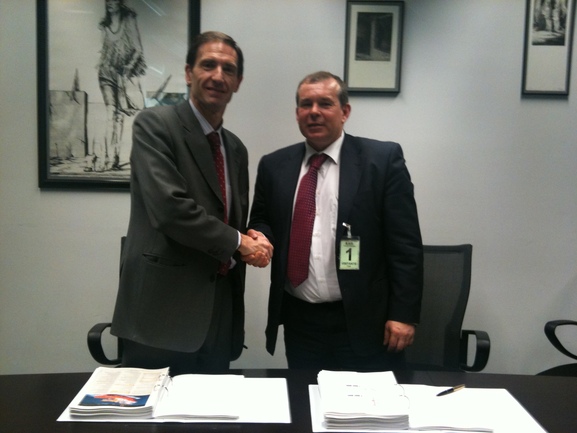 The bimep will become an international benchmark and attract technology and investment to the Basque Country that will generate approximately 200 skilled jobs both directly and indirectly. This commitment to developing marine-energy systems has placed the Basque Country at the forefront of the countries currently conducting research into this new energy source. It is estimated that the system could become operative in the final quarter of 2011.

The Basque Government, via the Ente Vasco de la Energía (Basque Energy Agency - EVE), has awarded the contract for the installation of the underwater electricity and communication cables for the bimep (Biscay Marine Energy Platform). The bimep is the largest marine-energy research project being implemented in the Basque Country and aims to become an international benchmark in the field. The contract, which was awarded to the company Elecnor, will involve an investment of 10.4 million euros.

The project to create an infrastructure for research into wave energy off the coast of Armintza has taken another step forward with the awarding of the contract to install the underwater and overland cables that will conduct electrical energy from sea to land. With the awarding of this sizeable contract, the bimep will enter into one of its most technically complicated stages, as the underwater cables are highly complex parts that, once installed, will enable testing and research to be carried out on wave-capture devices.

The underwater sections of the infrastructure will be installed by the company Elecnor, which won the bidding process organised by EVE for the design, planning, supply and installation of the cables. The contract is worth 10.4 million euros. The complex technical nature of the project means that the installation of the underwater cables and their connection to land-based facilities will take approximately nine months to complete, as long as the necessary official permits are acquired.

The bimep is a project promoted by EVE that will equip the Basque Country with the marine infrastructure to carry out sea-based research into wave-energy capture devices and test the different technologies that technology companies around the world are developing in the field of marine energy. The devices that transform the energy created by the movement of waves into electrical energy come in different shapes and sizes (although in general they tend to be the size of a small boat) and at present they are at different stages of development. Although the majority of them have reached the stage of full-scale prototypes, the technology is not yet mature enough to make commercial electricity production feasible.

As a result, the main objective of the bimep is to provide the companies that manufacture these devices with installations that are capable of assessing their designs and testing the technical and economic feasibility of their new devices. This will make the bimep an international benchmark for research into marine energy and attract knowledge and investment, and will make it possible to set up a sea-based testing and experimentation centre in the Basque Country that will in turn generate knowledge, wealth and new production sectors, both in terms of technological innovation and in terms of the mooring, maintenance and other marine-based services that will be required to ensure that the devices function correctly.

Owing to the performance of this infrastructure and the medium-to-high energy potential of the Basque coast, the placement of the bimep off the coast of Armintza is ideal for manufacturers to moor their prototypes and test their production capacities, exploitation costs and the costs of maintaining the different technologies, all under real conditions. It will also enable them to obtain data and information that will be of great value in improving their designs and working towards the commercialisation stage.

The bimep will therefore enable two kinds of wave-energy exploitation: short tests and demonstration trials that involve an evaluation of the performance of the equipment over a longer period of time. These longer trials will also make it possible to conduct a life-cycle analysis of the devices.

While the underwater cables are being installed, a research centre will be set up in Armintza where technical experts and companies that are testing devices using the bimep will have access to facilities for analysing and evaluating the data received from the sea-based infrastructure.

The bimep will be allocated an operational area of 5.3 km2, at a minimum distance of 1.7 km from land. It will, however, be close enough to interact immediately and flexibly with the moored test devices. The area allocated for the bimep will be closed to boats and sea traffic.

These cables, which are technically known as power cables, are highly advanced in technological terms and are designed to support their own weight (the cables have a diameter of 10 cm and weigh 25 kg per metre, which decreases to 15 kg per metre once they are submerged in the water) and withstand the tensions they will be subjected to during installation and throughout their useful life on the sea bed.

Moreover, in addition to conducting electricity each underwater cable will also be equipped with fibre-optic cables, which will allow the test devices to be monitored continually and provide data of great value to the research into, and development of, wave-energy capture technology.

In terms of wave power, the Basque coast has a medium-to-high energy potential of approximately 24 kW/m. Its combination of adequate potential and marine conditions that are not excessively aggressive make it an ideal location for mooring and testing prototype wave-capture devices, as the prototypes will not be subjected to extreme wave conditions that could result in significant economic losses. The following wave conditions will help the bimep become the leading centre worldwide for testing marine technologies:

• Calm seas for 20% of the time, which facilitates access to the devices for tasks relating to their operation and maintenance.

• Operational wave conditions for 78% of the time, meaning a great deal of time available for energy generation.

In addition to the bimep research project, other energy-generation projects using wave power are being developed in the Basque Country. The pioneering Mutriku project, which demonstrates the use of different, highly mature technologies, is at the completion stage for the installation of turbines in the new breakwater at the Basque port of Mutriku. The project will have an installed capacity of 296 kW and will produce an estimated 600,000 kWh of renewable energy per year, which will result in the emission of 600 fewer tonnes of CO2 during the same period.