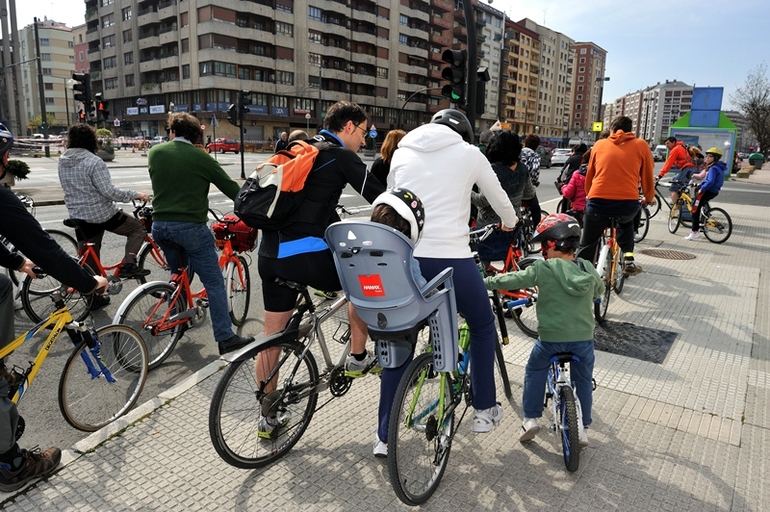 In 2016 (the latest data available), 81.9% of Basque youths aged 15 to 29 said they usually moved about on foot (or scooter). In addition, 39.8% claimed to use collective public transport (bus, train, subway, tram…) on a daily or almost daily basis and 8.1% said they cycle every day. As we can see, these forms of transport are not mutually exclusive and young people combine several modes of transport. Overall, 88.9% of young people in the Basque Country said they used some type of sustainable transport on a daily basis.

European Mobility Week is held between 16 and 22 September. The motto for 2018 is "Mix and Move" and it seeks to raise awareness about the benefits of using more sustainable transport modes such as public transport, cycling and walking. For this reason, the Basque Youth Observatory is presenting data on how many young residents of the Basque Country move about in this way on a daily basis.

However, as the different forms of transport are not incompatible, 26.3% of young people also said they travelled daily by car or motorbike and another 9.0% did so three or four times a week.

If we take into account those who said they use sustainable modes of transport every or almost every day, whether it is walking, cycling, or using public transport and, at the same time, use private motor vehicles (car or motorcycle) a maximum of one or two days a week, we can determine how many young people travel daily using only sustainable means. According to the above criteria, 63.5% of Basque youths aged 15 to 29 travels in a sustainable manner on a regular basis.

Sustainable mobility is more widespread among women than among men (68.0% and 59.2%, respectively). This is mainly due to the fact that women use collective public transport more than young men, even though men double the figures of women using bicycles. In addition, the use of cars or motorcycles is higher among men than among women, which results in lower values of men in this sustainable mobility indicator.

It should be noted at this point that people under the age of 25, mostly students, tend to commute on foot (or bicycle) to their study centres, as these are usually close to their homes or, if they are not close, they tend to use collective transport. In addition, they lack the economic resources to be able to buy their own vehicles in most cases (and people under the age of 18 are not of the legal age to drive). On the other hand, most of the people aged 25 to 29 are already working and, therefore, they can not only choose to buy their own vehicles, they often have no option but to use their private vehicles to commute to work.

Finally, young people living in the capital cities travel in a more sustainable manner, probably because their study centres or workplaces are more likely to be in the same cities and, therefore, they can walk or cycle to them and, as they have access to a larger public transport system within the city, they sometimes do not need to use a car.

Data on the incidence of each form of travelling come from the Basque Youth 2016 study prepared by the Basque Youth Observatory. This study was based on a survey of a representative sample of Basque youth aged 15 to 29. The sample consisted of 1500 young people (750 men and 750 women) who were asked about various current topics.  For this article, we have expressly calculated the percentage of young people who usually move using sustainable modes of transport.