The Deputy Minister for the Environment, Elena Moreno, participates in the Global Climate Action Summit in San Francisco 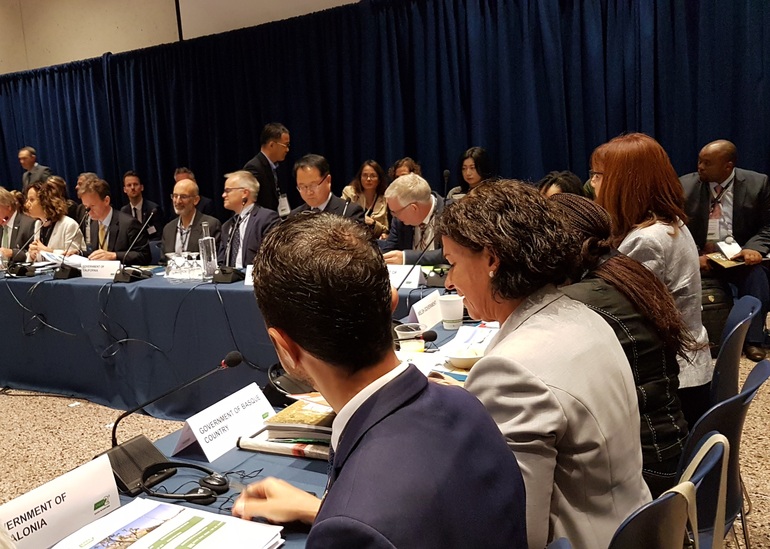 The Deputy Minister for the Environment, Elena Moreno, leads the delegation of the Basque Government that arrived yesterday to the North American city of San Francisco, to participate in the Global Climate Action Summit. Led by the State of California, the summit has gathered close to 5000 leaders of state and regional governments, in addition to businesses, investors, civil organisations and citizens from around the world to show how the situation has changed in the race against climate change and to achieve deeper commitments among states and regions.

The Basque Government will present the progress made in relation to the Basque Climate Change Strategy, KILMA 2050, in addition to specific initiatives that are being carried out in the Basque Country to decarbonise the economy and to adapt to and mitigate climate change. “KLIMA 2050 is the instrument shared by all the departments of the Basque Government to reinforce the measures implemented up until now and to adopt new ones, with the aim of mitigating and adapting our region to the effects of climate change", stated the Deputy Minister for the Environment.

Specifically, the case of Urdaibai as an example the integration of the primary sector in protected environments, is one of the experiences that will be presented at the round table on the role of subnational governments to comply with the Sustainable Development Goals in rural and periurban environments; a round table which will be attended by the director of Natural Heritage and Climate Change of the Basque Government, Aitor Zulueta.

Bilateral meetings have also been planned between Deputy Minister Elena Moreno and the leaders of the regions of Lombardy (Italy), Victoria (Australia), Baden-Wurtemberg (Germany), California (United States), and Wales and Scotland (United Kingdom), with the aim of sharing common regional strategies related to climate change, as preparation for the UN Conference on climate change 2018 (COP24), which will be held in Katowice, Poland, next December.

"Climate change is the most urgent environmental challenge; a challenge that transcends our borders and which involves all regions and states on the planet. Southern Europe is considered by specialists to be an area that is highly vulnerable to the direct effects of climate change, such as rising temperatures, floods or drought", pointed out Elena Moreno. "We have set ourselves ambitious goals in the Basque Country, such as a 40% reduction of greenhouse gas emissions, which are the cause of climate change, by the year 2030; and a commitment to a low carbon energy model with which we hope to achieve, by the year 2050, a consumption of renewable energy of 40% over final consumption", she added.