The President of the Committee of the Regions of Europe, Karl Lambertz, indicates to Beatriz Artolazabal that "he will make a political call to strengthen the instruments for the integration of migrants and for decentralized cooperation" 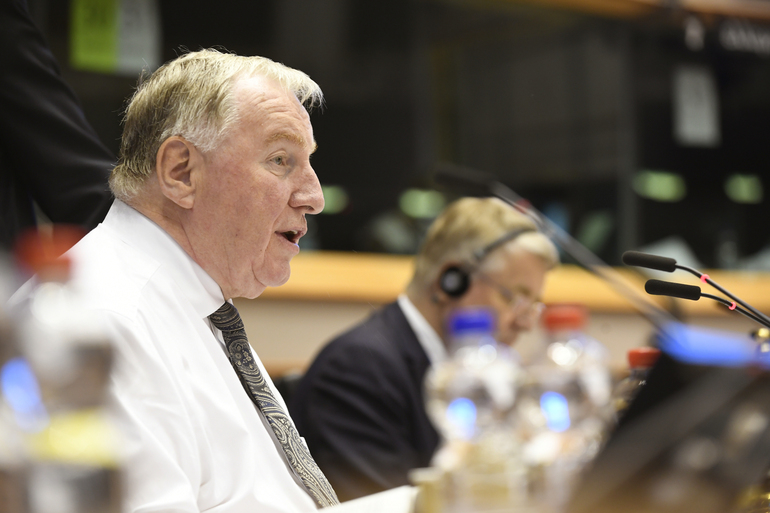 The President of the Committee of the Regions of Europe-CoR, Karl-Heinz Lambertz, has indicated indicates to the Minister of Employment and Social Policies of the Basque Government, Beatriz Artolazabal, his intention "to make a political call to strengthen the instruments for integration of migrants and for decentralized cooperation".

The questions raised by the Minister Artolazabal to Lambertz for a European management and strategy on migration, will be reflected, according to Lambertz, in his speech on the debate of the European Union, "from the regional perspective, in the plenary session of October".

Beatriz Artolazabal proposed last August 20 to Karl-Heinz Lambertz, President of the European Committee of the Regions, that "countries and regions of the EU define an effective policy that addresses the phenomenon of large migrations. Sub-state governments, countries and regions:  we know better than anyone the situation of our social and geographical environments and that is why we can contribute to defining that strategy and policy of the Union in terms of migration”.

In her letter, the Sailburu (Minister in basque language) of Employment and Social Policies reminded Lambertz of the Lehendakari's (Basque president) proposal to Jean Claude Juncker for a short, medium and long-term strategy.

According to Lambertz, "Decentralized cooperation on territorial development and the association between the local and regional levels of government in the implementation of the Sustainable Development Goals are the main objectives promoted in our political program. In February 2019, together with the European Commission, we will have a new edition of our Conference on Decentralized Cooperation where we will emphasize the role of local authorities in matters of local development". The president of the CoR-Committee of the Regions has especially invited the Basque Government to attend the Conference.

In his letter, President Lambertz appreciates the proposals of Artolazabal proposing a joint European action "and for his concern for migration, for Europe and for the role of all levels of government in the fight against the current crisis."

"The European Committee of the Regions has also highlighted the need to integrate territorial development in the countries of origin of current migration flows, particularly in Africa, and to strengthen our capacity to integrate migrants in different areas such as education, housing and labor market "indicates Lambertz to the basque Minister.

Lambertz exposes as an example "the Nicosia Initiative for the Libyan municipalities. A bottom-up initiative that is an instrument for local development that unites European and African partners in the provision of services and sustainable development. This is giving good results among the Libyan municipalities and can be replicated in other countries of our neighborhood. I invite the Basque Government to join our activities in this connection".

"We are also working to help local and regional authorities share their migration management experience, flows and integration processes, in partnership with the European Commission which, in particular, manages the Asylum, Migration and Integration Fund. In this context, I highlight the call for proposals, a document published by the European Commission on July 24, 2018 on the integration of third-country nationals in the societies of the States of Manber, where the main priority is the promotion of local networks and regional for the integration of migrants" specifies the president of the CoR.

"Your concerns are addressed in the opinion on "Reflection on Europe", scheduled for the plenary session of the October CoR. Rest assured that your concerns will also be reflected in my speech on the state of the European Union, from a regional perspective, in the October plenary session" adds the President of the European Regions , Karl Lambertz, to Minister Beatriz Artolazabal.