The first electric vans are now on the market 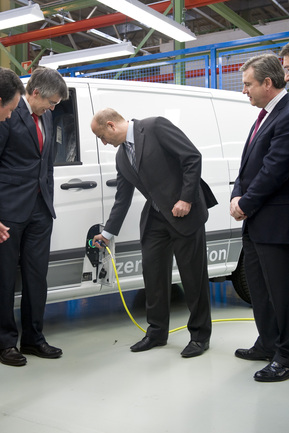 The E-Vito van, produced at the Mercedes plant in Vitoria, is the first electric industrial vehicle built in series.

The Basque Country, thanks to Eroski and its distribution fleet, now has its first five E-Vito vans. The E-Vito is the first electric industrial vehicle and provides the same performance as the fuel model, but with the added benefits of zero CO2-particle emission and no noise pollution. The Basque Government's Minister for Industry, Bernabé Unda, pointed out that "this is a textbook case of partnership and foresight, and if there is something to be learnt from this, it is that a collective effort can position a section of our economy as a leading player internationally".

In December 2009, representatives of the Basque Government and of Mercedes Benz in Spain signed an agreement to produce electric vans at the company's plant in Vitoria, a commitment fulfilled today when Mercedes Benz handed over the keys of the five first electric vans, E-Vito, which will become part of the company's distribution fleet. This is a collective effort driven by the Basque Government and its Minister for Industry, Bernabé Unda, who stressed "its important value as a strategic initiative and as the driving force for other companies. It is hugely symbolic as it is an example of our enormous capacity to work together and make sacrifices in key projects".

"We are therefore moving towards a mobility model that is more sustainable and more environmentally friendly. Our target for 2020 is that 10% of the vehicles sold in the Basque Country will be electric," pointed out the Minister for Industry. Last July, the Basque Government Cabinet approved the Competitiveness Plan, which according to Bernabé Unda, is the "guide" for the "competitive transformation that the Basque Government wishes to foster in the Basque Country, the aspiration to create a sustainable, open and innovative economy". The Minister for Industry emphasised that projects such as this one are "textbook formulae for the fulfilment of this triple target".

Unda stressed the need to understand the global economic market. "The competitors of Basque companies are no longer in Arrigorria, Mondragon or Juniz. In an increasingly more globalised world, there are no market borders, our companies now compete abroad on an equal footing with the Chinese, Germans or Americans, and it is therefore vital to be in a strong position in specific sectors in order to be able to stand out. This is currently what is happening with the electric vehicle and is not exclusive to one or two companies, but rather the Basque automotive sector as a whole is making its mark and working together to establish its credentials of quality, innovative capacity and future vision".

The Department for Industry and its head believe that this project can serve as an example and drive the Basque business structure.