The president of the Basque Country visits CAF facilities in Wales 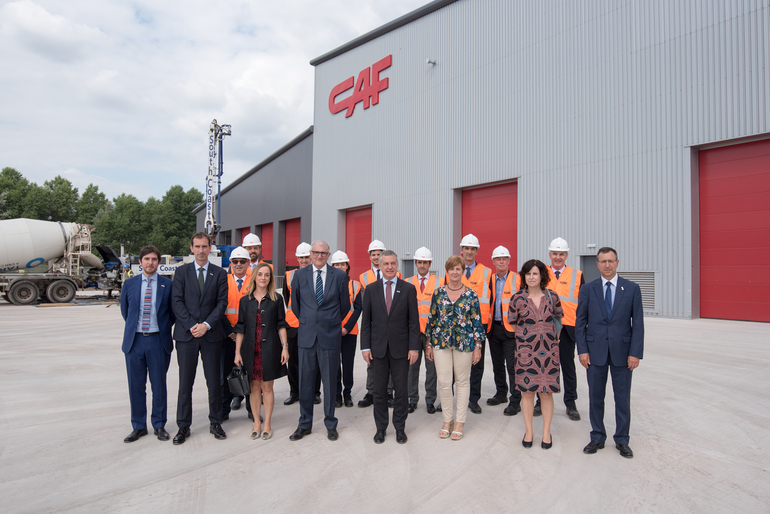 The President of the Basque Country Iñigo Urkullu this afternoon toured the new plant to be opened later this year in Newport (Wales) by rolling stock manufacturer CAF, together with the company's CEO Andrés Arizkorreta. The President ( Lehendakari) said that the new plant is “a great example of how to adapt to a highly competitive global market” and exemplifies all four core aspects of the Basque Government's industrial policy: Investment, Industry, Innovation and Internationalisation”.

The visit was the first stop on Mr Urkullu's official visit to Wales. The Lehendakari was accompanied by other members of the Basque delegation: the Regional Minister for Economic Development and Infrastructures, Arantxa Tapia; the General Secretary for Overseas Action  Marian Elorza; the Deputy Minister for Industry, Javier Zarraonandia; the Director for European Affairs Mikel Anton; the director of the Basque Internationalisation Agency Ainhoa Ondarzabal and the director of the agency's London office, Pablo Fano. Representing CAF were the CEO Andrés Arizkorreta;  the general sales director, Josu Esnaola and the manager of the new plant, Graham Taylor.

The visitors arrived at 3:30 pm local time. They were met outside the plant and then shown around the company's future offices where they were given a brief presentation of some key features of the facilities. They then visited the buildings in which rolling stock will be manufactured.

The Lehendakari thanked CAF for inviting him to visit the plant. With the countdown for Brexit now well underway, Mr Urkullu said that “The Basque Government will continue to promote Basque interests in the UK. We will go on growing the close relationship we have built up between our countries and the fact that a Basque company, CAF, is opening a factory in Wales is evidence of this”.

The Lehendakari said that CAF's investment is designed to meet demand for new, more efficient and environmentally friendly trends in mobility The Basque Government has its own electric mobility plan, he said and he sees CAF's new facilities as “an area of opportunity” for technological advancement and solutions in this new field in which the Basque Country must strive to be at the forefront.

CAF's CEO, Andrés Arizkorreta said that the investment made will enable  growth in the rail industry and create highly skilled jobs locally.

The Basque Government is working to assist CAF in obtaining innovative technology and expand into new markets. As an example, the Lehendakari mentioned that “ETS-EuskoTren and CAF have signed an agreement to innovate rail technology and introduce the CBTC system into the Basque rail network, which will improve train safety and effectiveness using smart running control”. The Basque Country is adapting to new requirements to "overcome technological barriers and pioneer the introduction of smart transport systems".

Mr Urkullu said he was committed to "the model of public-private partnership to successfully implement innovation projects that can contribute added value to the Basque Country brand and compete on the international market.

After many years operating in the UK, CAF has now decided to open a plant in Newport (Wales), in one of the most active and competitive rail markets in Europe. The Basque company has invested nearly €40 million in the plant which is due to be up and running by the end of 2018. The site covers 46,000 square metres (11.4 acres) and it is estimated that the factory will provide employment to more than 300 people by 2019. It will have a major impact on local suppliers and service providers, contributing to thecreation of highly-skilled jobs.

The plant is designed for the manufacture of all types of rolling stock for electric and diesel multiple units (EMUs and DMUs), trams and high-speed trains.

CAF is already a major player on the British market: it supplied units for the Northern Spirit line and the Heathrow Express linking the airport to Paddington station in London.

The company recently reported that it had been invited by HS2 Ltd, the British state-owned company behind the construction of a new high-speed train network in the UK, to join the list of companies partipating in the procurement programme for high-speed trains to operate on the new network. According to CAF, the contracts will cover design, construction and maintenance of at least 54 trains, which will come into service in 2026.