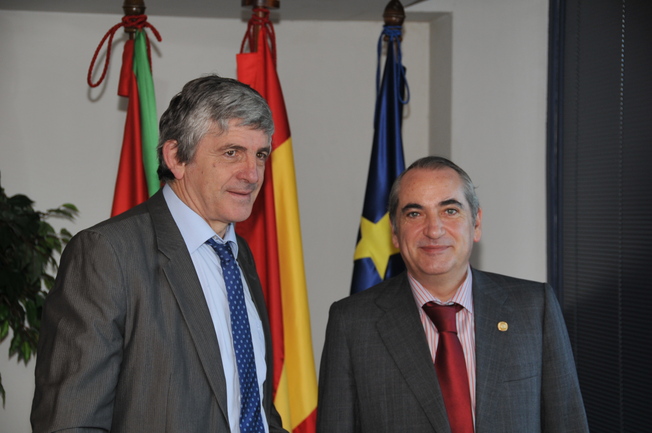 Minister Iñaki Arriola has taken over the presidency of the PLAE (Basque Country - Aquitaine Logistic Platform) for the coming two years during the meeting held today in San Sebastián, where the Vice-President of Aquitaine, Bernard Uthurry, was also present.

Minister Iñaki Arriola's holding the presidency is particularly important at a time when the community institutions are in the throws of defining the new map of trans-European transport networks. The Department for Transport will therefore seize the opportunity offered by the change of presidency, and by the many different activities scheduled by the PLAE for the coming year, to lead, advance, develop and promote the Atlantic Rail Corridor.

The current process to review the RTE-T for the post-2014 period plans to publish the white paper on community transport policy in June 2011, along with the RTE-T review, which will define the projects at the planned levels: "core network" and "comprehensive network".

The Basque Government will work with representatives of the Atlantic Arc Commission to ensure the Atlantic Freight Rail Corridor project is among the priority lines of the new network defined by the European Commission ("core network").
The planned actions include:

The assembly will be a good opportunity to take stock of the actions performed, lay the foundations for the future action strategy and position the Atlantic Rail Corridor as a priority vector of the future Atlantic Area Strategy currently being prepared by the European Commission.

Therefore, and in order to optimise existing resources, the Government seeks to channel part of this work to foster the Atlantic Corridor with the backing of the PLAE, in order to benefit from the networks of the venture, its contacts, its experience, its presence in many forums and at conferences and trade fairs.

Apart from the Corridor, the PLAE plans to run a series of activities, mainly funded by the AETN European project. During this year, the last of the project, some of the results are going to be unveiled, including the virtual map of companies, a multimedia tool to locate and showcase any transport and logistic company located in the Basque Country or Aquitaine which can be part of this project free of charge. The PLAE will also organise technical seminars focused on Europe's current problems and, yet again this year, will be present at Europe's two most important trade fairs: Transport&Logistic in Munich and the SIL in Barcelona.

The Assembly is positive about the activities organised over the last year. The PLAE, mainly thanks to the boost from the European AETN project over the last two years, is working extensively on communication and promotion, by organising visits of interest both in the Basque Country, Aquitaine and abroad. It is also hosting cross-border technical seminars that attract numerous stakeholders from the transport and logistic sector, as well as promoting the Euro-regional area in the different forums, fairs and seminars in which it is present. The Basque Country and Aquitaine are increasingly making their mark in Europe and internationally.