Speaking to the consular corps, the Lehendakari advocates a Basque Country focused on “the ongoing path of internationalisation” 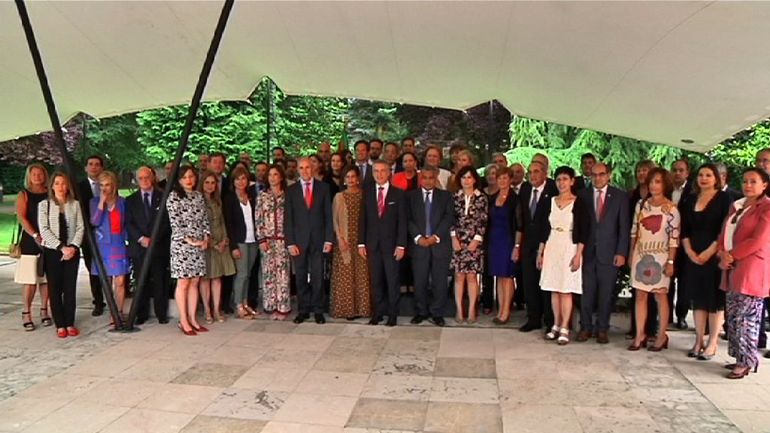 The Lehendakari, Iñigo Urkullu, today hosted a reception at the Ajuria Enea Palace for representatives for the consular corps accredited in the Basque Country, an event which was also attended by the Basque Government's ministers and its General Secretary for External Action, Marian Elorza. The Lehendakari described a Basque Country that “believes in internationalisation”, that seeks "to showcase the Basque People around the world”, and he thanks the consular corps for their help in that regard.

The Lehendakari began his speech by outlining the external action and international relations milestones of this year, which has been “a particularly fruitful year for the internationalisation of the Basque Country”. He went on to mention the approval of the Euskadi-Basque Country Strategy 2020, which envisages 1900 actions linked to internationalisation. In this regard, the Lehendakari stressed some of the highlights this year.  These include the signing of the Memorandum of Understanding with the Organisation of Ibero-American States, the official trip to Canada and Quebec, the Learning Tour with a US Delegation and the General Assembly of the United Regions Organization /World Forum of Regions, held here in Vitoria-Gasteiz.

Another of the milestones which the Lehendakari stressed was the approval of the Vision on the Future of Europe, the Basque Government’s contribution on the reflection initiated by Jean Claude Juncker in March 2017 with the White Paper on the Future of Europe. In this regard, he stressed the working meetings with 15 ambassadors and the Madrid session with 25 EU ambassadors, the "Dialogues with Citizens” initiative on innovation, multi-level governance and youth employment, and on 9 May, Europe Day, the  Lagun Onari award being presented to the Basque Council of the European Movement-Eurobasque.

The Lehendakari also highlighted the Euskadi Basque Country Agenda 2030, approved on 11 April and the third of the milestones mentioned by the Lehendakari. He pointed out that the Basque Country is the first Public Administration in the Spanish State to reflect its commitment to this strategic UN initiative. “We want to be a global player and for what we have to say to be taken into account," he explained. The Lehendakari then advanced the short-term initiatives to give continuity to this challenge: an official visit to Wales next week; the participation at the High Level Political Forum on 16 July, organised by the United Nations to monitor the UN 2030 Agenda for Sustainable development; and the organisation of the “Basque Diaspora Day” in the Basque Country on 8 September.

The Lehendakari added that the Basque Country is committed to innovation, equality, sustainable growth and human development. Committed to people, those who reside here and also those forced to leave their homes and families in search of a better future. “A country that wants to be increasingly more the master of its destiny within Europe,” he explained.

“You are our ambassadors in the world. Of a Basque Country, a country, that offers reliability, security and stability. That has been governed on the basis of integrator agreements for four decades. That, surely, will continue to do so in the future. There is no other way,” he pointed out.

The Lehendakari ended by referring to "Un Pueblo ancestral que ama la vanguardia” [An Ancestral People who Loves the Cutting Edge] by Kirmen Uribe, and explained that the book that seeks to showcase the Basque People around the world is our calling card. He then thanked the consular corps for helping to disseminate what the Basque Country means on the international stage. “Thank you for accompanying us along the ongoing path of the internationalisation of the Basque Country,” he concluded.

Sameh Safty, Vice-Dean of the Consular Corps and the French Consul General, also spoke at the meeting.