The Basque Festival of New England: From the seeds of Jai Alai to the streets of New London 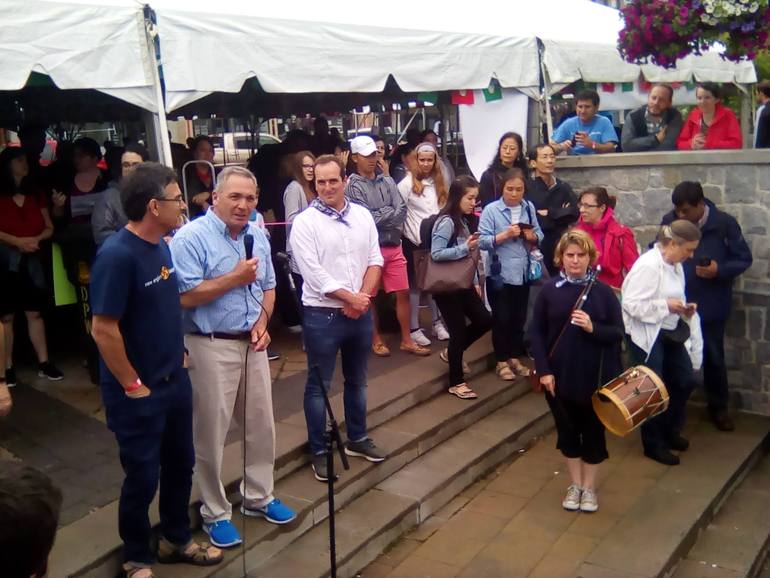 The place chosen for the Basque Festival of New England (Connecticut, USA) has been New London, a well connected enclave between big cities like Boston and New York. This has encouraged other Basques to visit us and join the celebration, organizer Juan Mari Aramendi assessed.

But not only North East coaster Basques came to the Festival. People from other euskal etxeak or Basques communities of the US and Canada (like Montreal and Quebec, Florida, California and Nevada) could be found onto the hundreds of assistants to this great Basque gathering of the East Coast.

First step of the agenda took place on Friday afternoon at River Thames Greenery, where the visitors had the chance to taste some Basque typical products: cheese, or white (txakoli), rose and red wine (Rioja).

After this, the “trikipoteo”, a popular run of bars which always goes with an itinerant live performance of “trikitixa” (music played live with accordion and tambourine) moved to the Hot Rod Wings bar in Bank Street. There New England Basque Club invited the assistants to a tasty dinner based on the specialty of the house: many different types of sauced chicken wings.

Next morning a parade conformed by visitors, dancers and musicians began from the City Hall to the Parade Plaza. The institutional reception lead by the Mayor Michael Passero, accompained by Juan Mari Aramendi from the New England Basque Club and Iker Goiria from the Provincial Council of Gipuzkoa, took place.

After the "Aurresku" (a ceremonial dance that greets the authorities) Mayor Passero gladly received all the visitors and remarked the strong whaling tradition, connections and similarities between both Basque and New England’s naval histories.

As the day moved onward, an array of music and dance performances started within the celebration premises. Musicians brought from Gipuzkoa made more enjoyable if possible the festive atmosphere breathed in the Parade Plaza.

In parallel dancing groups like “Gauden Bat” from Chino (California), “Zazpiak Bat” from San Francisco (California) and “Ardi Beltza” from Lamoille (Nevada) made people dance, while woodchopper or “aizkolari” performances were developed by Juan Mari Aramendi, Riki Sotil and Patxi Gandiaga. And music went on and kept people grooving until dusk, when the time to close an enriching Basque culture day in New London arrived.