"Basque Fest" in New England: Great Basque Festival of the East of the USA 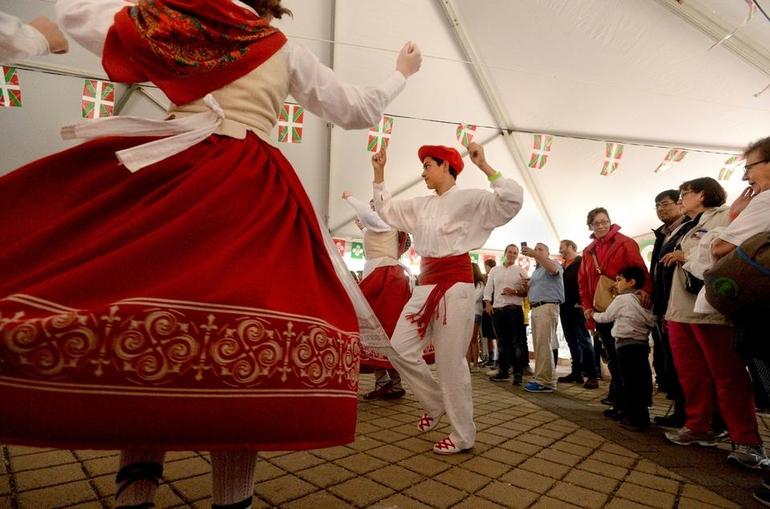 The New England Basque Club is an official member of N.A.B.O. (North American Basque Organizations) recognized by the Basque Government. Its goal is to celebrate Basque culture and traditions and to preserve and to promote them in New England.

On June 23, 2018, The New England Basque Club has held its first Basque Festival (see the news). At the Festival there were Basque cuisine, dances, live music, rural sports, parades and open markets. It has been a great success, and all for free (see the program)

The New England Basque Club will also be in charge of the 2020 annual North American Basque Organizations Convention, which will host organizations from all over the US and Canada. Up until now Basque activity in the US was concentrated in the western half of the country. But this may have begun to change for the coming future.

The beginnings of the New England Basque Club are tied closely to Jai Alai. In the early nineties their members were simply a large group of pelotaris living in different parts of New England. When the different Jai Alais were still open, there was no need for a club: they all knew each other and they were always together.

The origins: the Basque Club of Rhode Island and the Jai Alai sport

In the year 2004, the Rhode Island Basque Club was officially constituted and they began offering euskera classes and organizing cultural events. Through these activities they were able to raise awareness about the presence of Basques in New England and, as a result, the membership grew as more people who were equally passionate about and engaged with Euskal Herria heard of their efforts.

In only ten years their membership has grown from a group of ex-pelotaris based primarily in Rhode Island to include people from all walks of life, representing multiple generations, living around all of New England. For that reason, in 2014 they decided to officially change their name to the New England Basque Club. Some of them are Basque by birth, others by adoption, some by blood, others by marriage. They are united by strong personal connections to Euskal Herria.

Their hope is to continue growing in the future and to contribute in important and meaningful ways to the Basque diaspora. They are proud of Basque language, culture and traditions and they want to preserve them, pass them on to their children and share them with the people of New England. In order to nurture their roots and pass Basque heritage on to others, they organize a variety of activities every year: euskera classes, cultural workshops, rural sports exhibitions, concerts, lectures, arts and crafts activities for children, and film series.