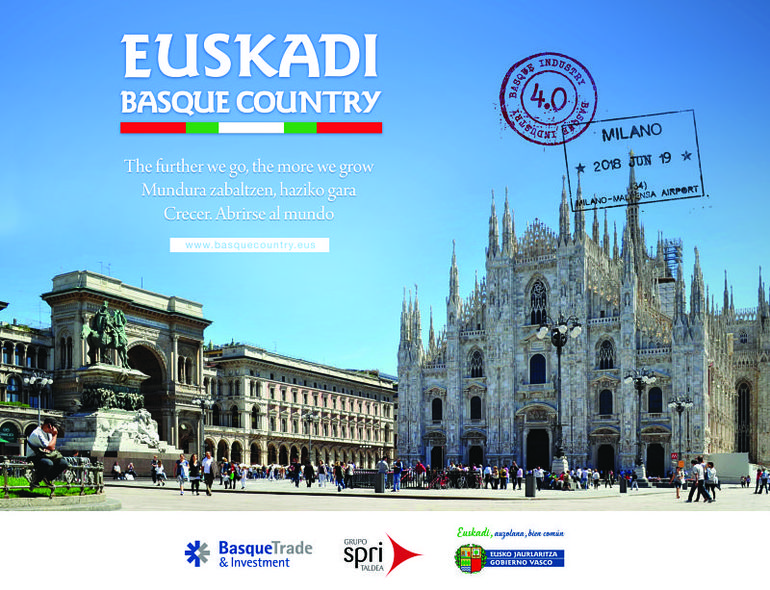 A Basque Government delegation, led by its Minister for Economic Development and Infrastructures, Arantxa Tapia, will travel to Italy this week to open a new trade office of the Basque Country in Milan.

It will be a three-day trip with a busy schedule, during which the Basque Government Delegation will meet with a group of Basque companies already established on the Italian market, will hold institutional meetings with representatives of the Piedmont and Lombardy governments, promote quality Basque products in the world of haute cuisine and will attend the opening of the new Danobat plant.

Internationalisation is a key tool for the competitiveness of Basque companies and Italy is pinpointed in the Business Internationalisation Plan 2020 as one of the priority countries. The opening of the office will pave the way for companies to search for new business channels in a country with cutting-edge technology in sectors such as Machine Tools and the Automotive Industry. Synergy opportunities are also opening up in Aeronautics, Advanced Manufacturing and Robotics, sectors where Italy and the Basque Country share similarities.

The new office is located in a favourable business setting for its role.  It joins the foreign network of the Basque Internationalisation Agency, which is part of the Spri group, and which currently boasts 17 trade delegations.

The opening of this office is happening at a key moment from the political and institutional point of view due to the last elections and the recent structuring of the Italian institutions.

Meetings with the Piedmont Premier and the Lombardy Minister

Minister Tapia will meet twice with each of Italian institutional representatives. The Lombardy Minister for Economic Development, Alessandro Mattinzoli, will attend the opening of the Milan office and will meet with the Minister to discuss the most important aspects of the Basque economy. The Piedmont premier, Sergio Chiamparino, will attend the opening of the new Danobat plant, located in that region, and will also meet with the Minister.

The schedule also includes a work session with Basque companies and a culinary event mainly aimed at promoting Basque produce in the haute cuisine sector.  Andoni Luis Aduriz is going to endorse this culinary experience that will be prepared using food and drink with Basque origin and quality certificates and which will be prepared at chef Matías Pedromo’s Contraste restaurant in Milan.

The Basque delegation has two other events to round off its schedule. On the one hand, the visit to MIND - Human Technopole, which is being set up at the Expo site and will showcase science, knowledge and innovation. On the other hand, there is the visit to the Polytechnic University of Milan, where they will discuss areas related to Industry 4.0 and digitalisation.