Minister Artolazabal: "The social challenges of the Basque Country imply that public policies increase values and solidarity, and avoid situations of vulnerability" 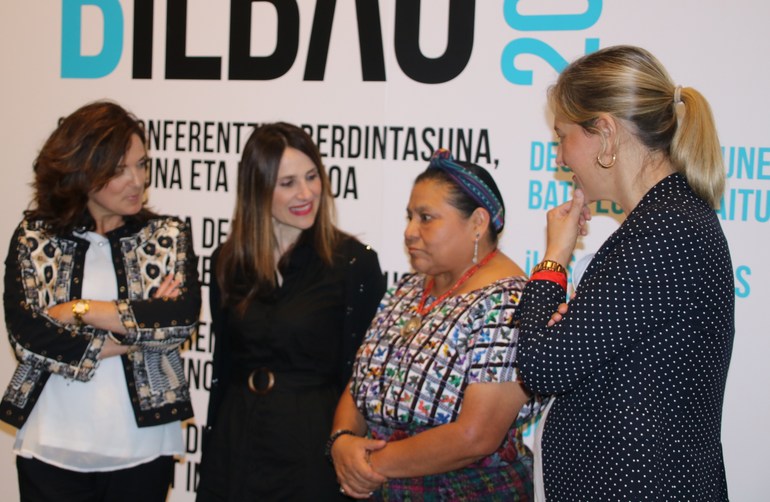 The Minister of Employment and Social Policies of the Basque Government, Beatriz Artolazabal, commented that "the three challenges facing the Basque Country in social matters require that public policies, in addition to meeting the needs of citizens, serve to increase values ​​and solidarity; foresee actions with solid social pacts to avoid and reduce demographic aging and avoid situations of vulnerability by adapting current structures to new needs".

Mrs. Artolazabal has participated in the Conference of the Council of Municipalities and Regions of Europe (CEMR) held in Bilbao with the President (Lehendakari in basque language) of the Basque Country Iñigo Urkullu and 500 mayors, local and regional leaders, European institutions and international organizations from 40 countries in Europe, America, Africa and Asia. The Minister has presented the paper entitled "The Basque multilevel government model".

"There are other dimensions that require reflection and consensus. The Basque Country (Euskadi in basque language)  will be in the future what our citizens want, when we decide, on solid diagnoses, what we want " said Beatriz Artolazabal.

According to Mrs. Artolazabal, "we cannot allow solidarity and empathy to be in danger of extinction. In the Basque Country, 3 out of every 4 euros are allocated to social spending. The equality of opportunities and the protection of the weakest person underlie the policies we develop as a Country and so that these policies can last over time, we need people who believe in the protection systems that we have endowed ".