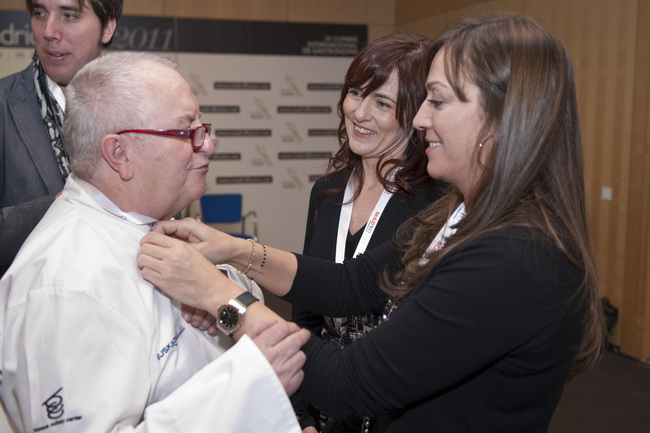 The Basque Government and the Basque Culinary Center (BCC) showcase gastronomy and wine as the driving forces of Basque tourism. The BCC unveils the Centre for Research and Innovation into Food and Gastronomy

Pilar Zorrilla, the Basque Government's Vice-Minister, aims to convert the Basque Country into a wine and gastronomy benchmark worldwide. The Basque Culinary Center, the driving force behind Spain's first Faculty of Gastronomic Sciences and the only one worldwide to boast an R&D centre, will open its doors in September.

Pilar Zorrilla highlighted the strategies implemented in recent months in the Basque Country, with special emphasis on the commitment to innovation and excellence. She went on to explain how the success in attracting tourists is mainly down to the new Marketing Plan deployed by the Basque Government, where gastronomy and wine are one of the star products and the driving forces underpinning inbound tourism to the Basque Country.

This latest tourist feature introduced by the Basque Government's Department for Industry, Innovation, Trade and Tourism is mainly aimed at enjoying the wine and gastronomy experiences in the Basque Country and at encouraging the tourists to taste and learn about the products.

The tourists can discover the magnificent cuisine d'auteur of the 25 Michelin stars that the Basque Country holds, try the miniature cuisine, the pintxos (as tapas are known in Basque), or the dishes prepared by the new generation of chefs who are further consolidating the cutting-edge gastronomic tradition that the Basque Country has led for years. The wineries have likewise become a tourist attraction as over 55 of the 591 wineries in the Rioja Alavesa with denomination of origin welcome visitors.

In recent years, this sector has established itself as a holiday destination, reflected in the many state-of-the-art architectural projects for the wine industry.

Isabel Muela summed up the endeavours of the Rioja Alavesa wineries in 2010, which resulted in a 22.4% increase in visits to Álava.

The partnership between the Basque Government and the Basque Culinary Center reflects the commitment to gastronomy. The BCC seeks to be the driving force behind the training, research and innovation infrastructure aimed at developing the food, hotel and gastronomy sector, with a clear international dimension.

Joxe María Aizega described the main areas of interest of its Centre for Research and Innovation into Food and Gastronomy. Along with the Faculty of Gastronomic Sciences that will be operational in September, the centre will be the only one of its kind in the world to bring both aspects together in a single facility. He described the research and innovation activity that will take place at the Faculty of Gastronomic Sciences, along with the degree, post-graduate and life-long learning courses to be run. This is a landmark event for a profession and a sector that will thus achieve its greatest academic recognition, as there is currently no official university course in the field of gastronomy.

The Basque Culinary Center wishes to ensure the continuity of Basque and Spanish cuisine as a haute cuisine and innovation hub in the future and to foster research and knowledge transfer to professionals in the catering industry and business sectors. It likewise seeks to disseminate knowledge directly and indirectly related to gastronomy and achieve an international reputation that positions the country as the Mecca of haute cuisine at global level. Another of its main goals involves acting as the driving force behind technological transfer and innovation within companies in the sector.

The Centre for Research and Innovation will focus on development and knowledge transfer within the gastronomic sector itself, on making the different areas of a restaurant (kitchen, service, management) more competitive and on ensuring that the catering industry overall is competitive. It shall likewise foster interaction and knowledge transfer between gastronomy professionals and the business sector linked to food and gastronomy.

Work is currently being completed on the building, which will have a specific floor for the research centre, where there will be different research workshops and laboratories, along with experimentation and sensory analysis rooms. The Basque Culinary Centre will employ 20 full-time researchers.

Another of the fundamental contributions of the Basque Culinary Center will be to provide qualified human resources, mainly, to the HORECA (hotel, restaurant and catering) sector. Emphasis will not be solely placed on teaching gastronomic or culinary skills, and the students will also study areas related to management, business approaches, image, service, etc. The availability of a centre specifically focusing on gastronomy will likewise enable synergies to be generated along with new partnerships with other technological centres, particularly with Azti-Tecania and the Centro Superior de Investigaciones Científicas (Spanish National Research Council (CSIC)) and companies from the sector. New areas of research and work will be developed and the technological transfer will consolidate both projects.

The Basque Culinary Center has been set up in conjunction with Mondragon Unibertsitatea and is backed by the chefs who have been actively involved in the initiative (Juan Mari Arzak, Martin Berasategi, Pedro Subijana, Karlos Argiñano, Andoni Luis Aduriz, Hilario Arbelaitz, Eneko Atxa), Mondragon Unibertsitatea, institutions such as the Basque Government, the Ministry for Science and Innovation, Gipuzkoa Provincial Council and Donostia-San Sebastián City Hall, the AZTI-Tecnalia technological centre and the Fagor Group. The most influential chefs worldwide, headed by Ferrán Adriá, will be on the International Advisory Board of the Basque Culinary Center.