“The Basque Country has taken a firm step towards sustainable financial products, Azpiazu explains to the German investment marke 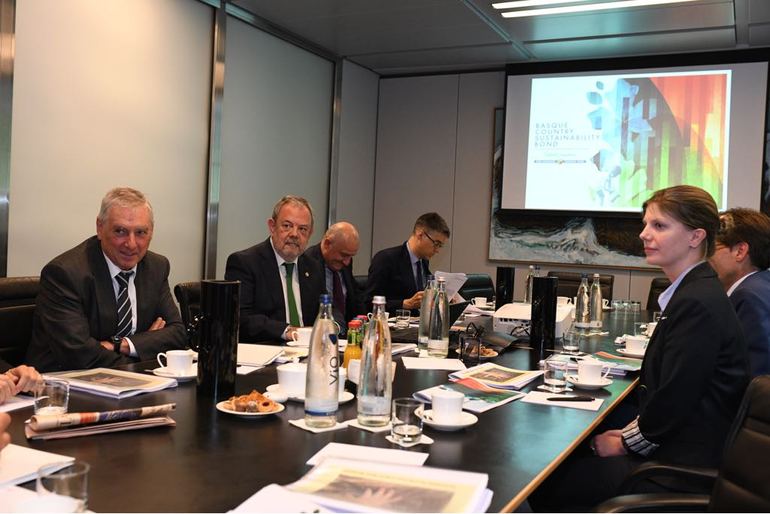 The Basque Government’s Minister for Finance and the Economy, Pedro Azpiazu, held an institutional meeting in Dusseldorf this afternoon with the Government of the Region of North Rhine-Westphalia, specifically with Axel Bendiek, head of the Debt Management Office, and with Kirsten Haeger, in charge of Sustainable Finances.  The aim of the meeting was to present the “Basque Country Sustainable Bond” and pool experiences in sustainable financial products.

North Rhineland was part of one of the most important mining areas in the European industrialisation process. It is now Germany’s most industrialised region. This State has changed its traditional industrial sector image and has become one of the main centres of ecotechnology and trade fair, financial and insurance activity. If it were an economically autonomous nation, it would be ranked 20th among world economies. Roughly, 20% of all the goods exported by Germany are manufactured in this State. Eighteen of the 50 leading Germany companies are based there.

As regards its public funding system, a clear strategy has been established in the last three years.  It is a commitment to funds from sustainable financial products, as they accounted for 4% of its public debt in 2015, 9% in 2016 and 30% in 2017.

The Basque Country shares common ground with this German region in different areas, such as energy and the environment, as part of the ENCORE, The Climate Group, network, where they share positioning  as highly industrialised regions with opportunities in the green economy and ambition in climate change and renewable energy policies, that act as drivers for the energy sector.

Furthermore, in the industrial and innovation sphere, they both take part in the Vanguard initiative, involving the 30 most industrialised regions of the EU.  As regards the institutional field, the North Rhineland region is interested in work with the Basque Country to highlight the regions with devolved powers. Therefore, they are making a joint contribution to the EU’s Task Force on Subsidiarity and Proportionality.

This institutional encounter took place after the meeting with over thirty investors in Frankfort in the morning, when the "Basque Country Sustainable Bond” was presented.  It is the first issuing of sustainable bonds by a Basque institution, is worth €500 million and fosters the implementation of the 2030 Agenda and achieving the UN Sustainable Development Goals.

The Basque Government seeks to play a key role in the development of the sustainable bonds and foster efficient and responsible financing to address the social, economic and environmental challenges of the Basque Country. The selection of programmes to be financed can be broken down as 81% social projects and 19% green projects.

On Friday 25th, the institutional trip will end in Bilbao with the presentation to financial and economic stakeholders.