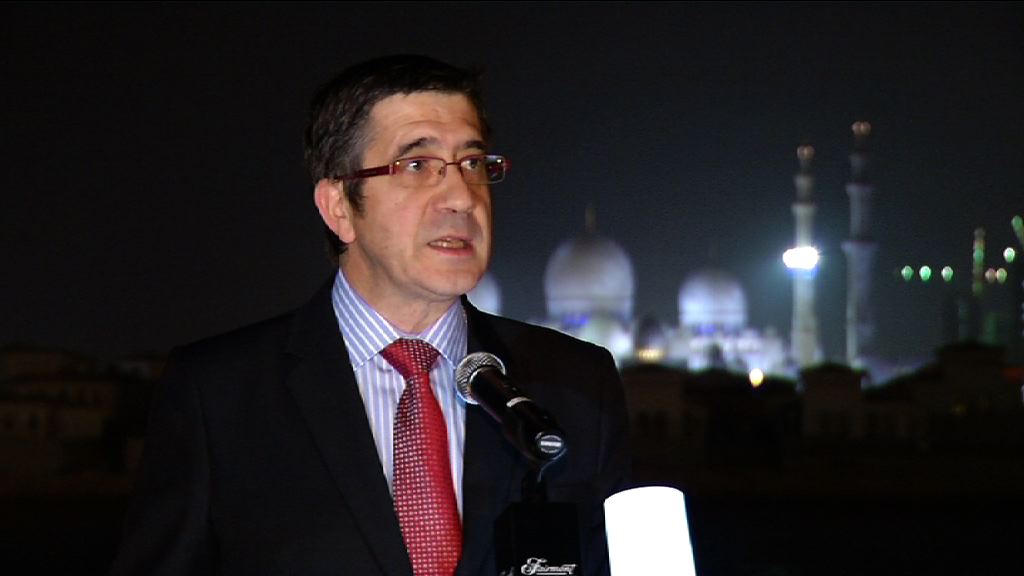 This afternoon, the Lehendakari, Patxi López, presided over the traditional reception that the Basque Government hosts on each overseas trip for Basque citizens residing in the area in question, in this case, Abu Dhabi. The Fairmont Bab Al Bahr hotel in Abu Dhabi provided the venue for this event wherein the Lehendakari drew attention to the "fundamental" role the Basques residing in the United Arab Emirates play in promoting the image of the Basque Country. "You are the mirror in which we see ourselves and you make us proud to be Basque," he stated. Mr López, who this morning participated in the World Future Energy Summit, pledged to offer "whatever help is needed to open ourselves and the economy up to overseas countries" and, in particular, to the United Arab Emirates, given that this country represents an "immense market for those companies that possess the capacity and talent to carve out a place for themselves".

After addressing the World Future Energy Summit, the Lehendakari brought the second day of this business mission in the United Arab Emirates to a close with a reception that the Basque Government delegation traditionally organises for Basque expatriates in the countries it visits. Over 200 people from the world of business attended the event in the Fairmont Bab Al Bahr hotel in Abu Dhabi, which served a selection of Basque delicacies, including anchovies and Rioja Alavesa wines. The Lehendakari, Patxi López, thanked Basque expatriates for helping to improve the image of Basques abroad and for being "a point of reference and a model for everyone". "You are the mirror in which we see ourselves and you make us proud to be Basque," he underlined.

The values of "seriousness, commitment and hard work" that have attracted so many Basques to this part of the world (over 1000 in the United Arab Emirates) are the values that the Lehendakari has adopted as the pillars of the Government's foreign policy in its desire to improve institutional and business relations. "We have approached this immense market with the objective of making an offer as a nation and to demonstrate that, regardless of our differences, the Basques know how to come together, to join forces and jointly search for the best means of ensuring progress, development and the well-being of the Basque Country," he added, before going into further detail on the business mission that has brought 80 Basque companies, Chambers of Commerce, Confebask and the universities of Mondragón and Deusto into contact with the Persian Gulf.

To this end, Mr López described the role of the United Arab Emirates in the Basque County's expansion to foreign markets as "strategic", especially in the field of renewable energies, a sector in which the Basque Country has presented itself here as a "leader". The Lehendakari drew attention to the importance of being considered a "preferential ally" in the region by taking advantage of the "Basque County's experience and its position as a leader", as well as the importance of participating in the strategic development of the United Arab Emirates. "And this is why we must be more ambitious, why we must strive to take a leading position in all those sectors in which we are strong; renewable energies, aeronautics and transport," he added.