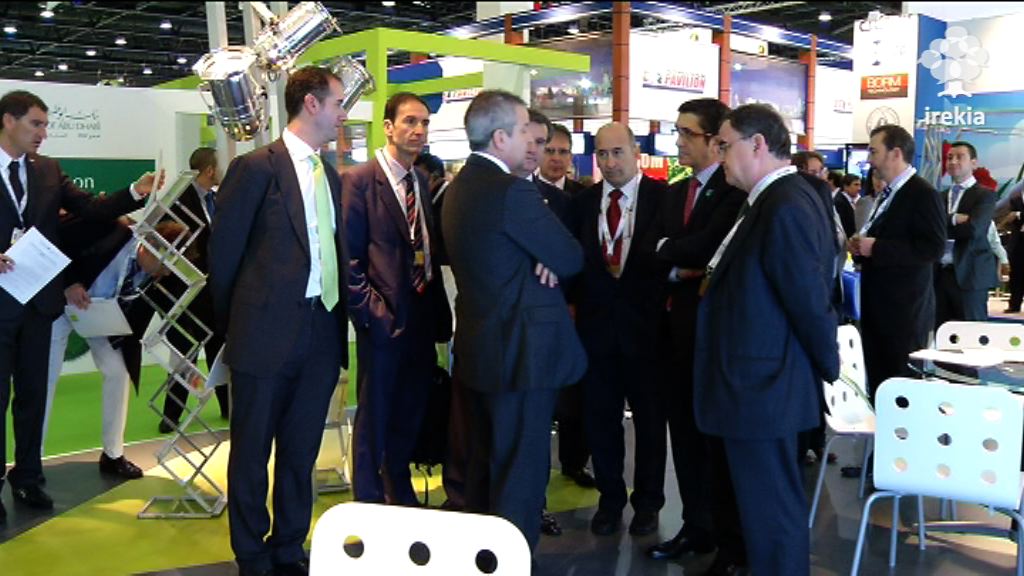 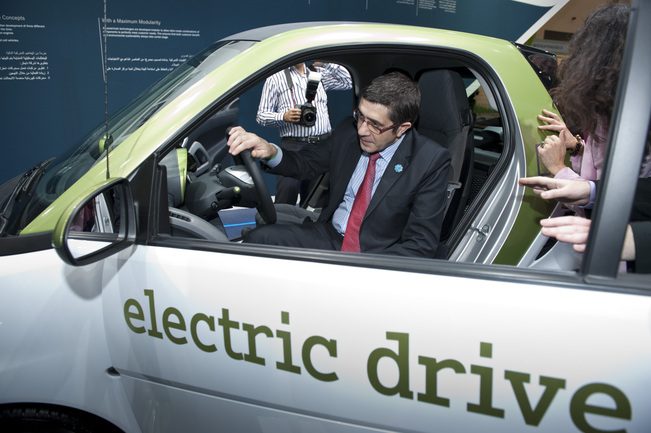 The Secretary-General of the UNO, Ban Ki-Moon, met with the Lehendakari during the inauguration of The World Future Energy Summit

"Solar air conditioning", "unconventional natural gas" and the electric vehicle - these number amongst the proposals defended by the Lehendakari during his address in one of the panels within the World Future Energy Summit, which was inaugurated today in Abu Dhabi (Arab Emirates). The Lehendakari has participated in the inauguration of the Summit, which is a reference point in terms of renewable energies, where he coincided with the Secretary-General of the UNO, Ban Ki-Moon, with whom he held a brief conversation. The Lehendakari underlined the importance of applying the concept of "energy efficiency" to all areas of society, from the individual to companies and the institutions themselves. In this sense, the Lehendakari defended the Basque Government's commitment to renewable energies that are also "enticing strategic projects that generate wealth and employment". "It's about turning a problem into an opportunity," he stated.

The Lehendakari, Patxi López, was seated in the front row alongside the United Nations Secretary-General, Ban Ki-Moon, and leaders of the United Arab Emirates during the inaugural ceremony of the World Future Energy Summit, which, opened today, will runs until the 21st of January in Abu Dhabi. Mr López participated in a Summit panel alongside government representatives from other countries to discuss the role of public administrations in the area of renewable energies. The Lehendakari expressed his commitment to renewable energies, adding that their virtue lies in their ability to "entice strategic projects that generate wealth and employment".

The World Future Energy Summit in Abu Dhabi brings together over 20000 people as well as government and business representatives from the four corners of the globe. The Basque Country has played a particularly important role in this Summit, which has included the Lehendakari's participation in an informative panel and the large presence of Basque companies in the stands area. The Lehendakari attended the event with the Basque Minister for Industry, Innovation, Tourism and Trade, Bernabé Unda, the General Secretary for Overseas Action, Guillermo Echenique, and members of the Basque delegation in the Persian Gulf.

In his afternoon address, the Lehendakari spoke of the Basque Government's core commitments in the area of renewable energies, which range from electric cars - 10% of the total number of vehicles sold are expected to be on the road by 2020 - to wind power developed by leading firms such as Iberdrola and Gamesa, and solar thermal and marine energy, without forgetting two new sectors in which research is already underway: "solar cooling" and "unconventional natural gas".

This commitment is manifest in the 2020 Basque Energy Strategy, which sets out the Basque Country's aim to "generate sufficient energy in terms of quantity, quality and time, in a sustainable manner". The Lehendakari emphasised the importance of the concept of "energy efficiency" as the key to achieving this. "Only those societies that succeed in implementing a rational and efficient approach to energy use will be competitive and sustainable at all levels," he concluded.

In the morning, after the official inaugural ceremony, the Lehendakari visited the stands of the companies within the renewable energy sector. Given the significance of the Basque presence in this Summit, the Lehendakari took the opportunity to learn more about the advances in research related to improving the efficiency of renewable energies.