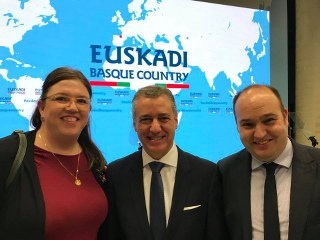 Download photo
Embed image
Annie Gavica (the president of the North American Basque Organizations - N.A.B.O), Iñigo Urkullu Lehendakaria and the director of the Office for the Basque Community Abroad, at the presentation of the update of the Strategy. Source: Irekia

Last January 24 the Lehendakari Iñigo Urkullu presented at the Euskalduna Palace in Bilbao the update to the new global scenario of the Euskadi Basque Country Internationalization Strategy for 2020 (EBC). The book explaining this strategy has been recently published on paper. In this report it can be clearly seen that with regard to the Basque Community abroad, the Strategy proposes 4 blocks of actions: 1) Consolidation of the Basque Club’s network; 2) Working towards the construction of a global Basque community in the 21st century; 3) Fostering knowledge concerning the diaspora in the Basque Country; 4) Dealing with Basque Communities abroad.

Based on the Four-Year Institutional Action Plan that emerged from the 6th World Congress of Basque Communities Abroad (2016-2019) and in line with the Diasporizatu! (Diasporise!) slogan, the General Secretariat for Foreign Affairs will seek to work reciprocally, supporting and strengthening links betwwen the Basque Country and the Basque Community abroad as a strategic, preferential element for promoting the interests of the Basque Country in the societies where they operate, and heightening awareness in Basque society of the diaspora to stress its role in disseminating the Basque culture and identity around the world.

Thus, on the one hand there will be more attention for and closer links with Basque communities abroad, including both the traditional diaspora, through the consolidation of euskal etxeak (Basque Clubs), and the new diaspora of the 21st century, whose needs must be identified, assessed and addressed. On the other hand, in line with the Diasporizatu! slogan, efforts will be made to promote knowledge of the diaspora in the Basque Country itself through actions to raise awareness in today’s Basque society of the historical contribution of the Basque Community abroad to the international image of the Basque Country as a country.

Hence, the Office for the Basque Community Abroad (as the driving force of the Strategy in the realm of Basque diaspora) foresees the following actions:

Promoting the consolidation of the euskal etxeak network by supporting their activities and operations, especially by helping them to incorporate ICTs so as to improve communications within the network and with Basque institutions.

Working towards the construction of a global Basque Community by identifying the specific needs of new types of emigrant in the 21st century; setting up support and assistance mechanisms based on the public sector to deal with these new emigrants, promoting the Basque Global Network as an element for communication and interaction between the new diaspora and the traditional diaspora and encouraging young people to take part in the Gaztemundu programme, which encourages a generational shift in management bodies and seeks to rejuvenate the active membership of euskal etxeak.

3.       Fostering of knowledge concerning the diaspora in the Basque Country

Promoting initiatives to increase knowledge of the diaspora at home, such as Diaspora Day (September 8) and the Archives of the Basque Diaspora,

4.       Dealing with the Basque Community abroad

Consolidating attention on the Basque Community Abroad, e.g. aid to households in situations of extreme need, assessment and support in regard to returning to thew Basque Country and aid in emergencies or disasters abroad, always within the framework of resources and authority of the General Secretariat for Foreign Affairs.