The Basque Country, ready “to seduce” the Middle East 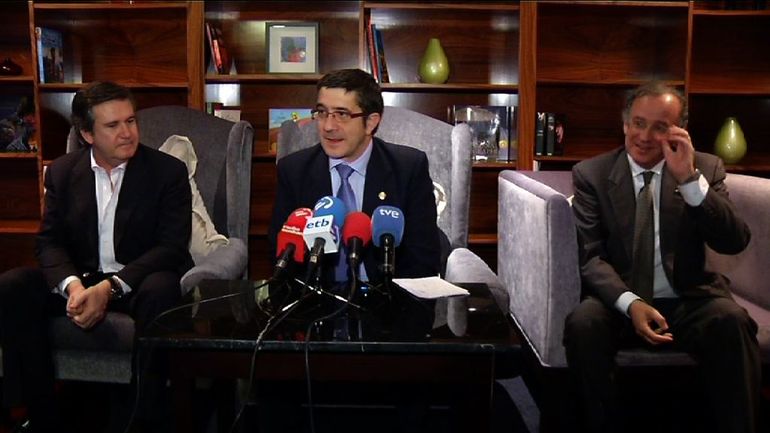 The first day of the institutional and business mission headed by the Lehendakari has served to reveal that the Near East has a better awareness of the reality of the Basque Country than was expected. This reflection was made by the Lehendakari, Patxi López, himself during a meeting held this afternoon with the Basque journalists who have travelled to Abu Dhabi (Arab Emirates) to provide coverage of the manner in which the trip unfolds. Mr López has classified the first day as "replete and positive". The Lehendakari held interviews with the individuals in charge of the strategic plans for the development of the emirate and has confirmed that over the course of the next few months, the Basque Country will receive Sultan Ahmed Al Jaber, Chief Executive Officer of MASDAR, and Khaldoon Khalifa Al Mubarak, one of the 4 sheikhs at the head of the strategic plans for the emirate and Chief Executive Officer of MUBADALA, a long-standing business collaborator of the Basque company SENER. "The objective is to seduce this investment capacity, demonstrating the good work of Basque companies," the Lehendakari stated.

The first day of the Basque institutional and business mission to the Middle East produced an agreeable news item: the Arab Emirates display a great deal of interest in and boast a great deal of awareness of the economic, social and political reality of the Basque Country. The plans and proposals that the Basque Government delegation, headed by the Lehendakari, Patxi López, has brought to the Arab Emirates and Qatar in order to attract investment in the Basque Country in sectors such as renewable energies, have been supplemented by the proposals and areas for action that are of interest to the heads of the emirate of Dubai, such as the accumulation of aeronautical energy, the electric vehicle, smart networks, marine energy, solar energy, energy efficiency, building construction, and sustainable transport. Important companies such as CAF and SENER "position us as an international reference point", Mr López stated.

The Lehendakari, Patxi López, heads the Basque institutional and business mission that will hold various meeting and attend congresses and conferences in the Arab Emirates and Qatar from today up until the 21st of January. The focal point of the trip will take place tomorrow with the inauguration of the World Future Energy Summit, in which the Lehendakari will take part along with ministers whose brief takes in renewable energies. Mr López leads a large delegation that includes more than 80 companies along with representatives of the Chambers of Commerce, Confebask and the universities of Mondragon and Deusto.
The agenda of the first day in the Arab Emirates involved 3 meetings with Abdul Rahman Al Ghurair, Chairman of the Dubai Chamber of Commerce and Industry, and members of the employers' organisation, who called for greater collaboration with the Basque Country above and beyond the traditional sectors of services, logistics and finance, whereby, in addition to the relations between the chambers in each region, "the Basque Country will participate in further meetings, congresses and conferences to showcase, in a more specific manner, the companies, projects and proposals in which they are interested." Later, in Abu Dhabi, the Basque delegation met with Sultan Ahmed Al Jaber, Chief Executive Officer of MASDAR, charged with implementing the MASDAR city project, the first completely ecological city in the world. Subsequently, the Lehendakari met with Khaldoon Khalifa Al Mubarak, Chairman of MUBADALA, a company that boasts long-standing collaboration with the Basque company SENER.

As soon as he landed, the Lehendakari initiated a frenetic day of meetings and encounters that enabled him to verify the "interest" of the individuals in charge of the bodies overseeing the implementation of the development plans in collaborating with Basque companies and participating in Basque plans. This interest is demonstrated by the fact that two of the leading figures in Dubai will return the complement and visit the Basque Country. In October, the Chief Executive Officer of MASDAR, the company charged with implementing the MASDAR City project, will participate in the European Energy Summit set to take place in the Bilbao Exhibition Centre in Barakaldo, and work has already commenced to establish which plans and projects lend themselves to this collaboration. In May, the Basque Country will receive the Chairman of MUBADALA, Khaldoon Khalifa Al Mubarak.

"We have a very tight agenda wherein the objective is to present the Basque Country just as it is: one of Spain's most advanced economies, a technologically advanced region at the cutting edge, with a modern business network; dynamic, enterprising, boasting qualified workers with companies that are a reference point in many ecological areas, areas that are of special interest here," the Lehendakari stated, drawing attention to the fact that the Basque Country has to "take advantage" of the opportunity that the "investment capacity" of the emirates represents. "The objective is to seduce this investment capacity by demonstrating the good work carried out by Basque companies," he added.

"A starting point for investment"

The Lehendakari, who was accompanied during this press conference by the Minister for Industry, Innovation, Trade and Tourism, Bernabé Unda, and the General Secretary for Overseas Action, Guillermo Echenique, stressed the "geostrategic" importance of the Arab Emirates, as the "starting point of a crossroads leading to Asia, Europe and Africa." "Everything that we do here may have a direct effect, in terms of activity and presence, in the remaining Gulf countries and Africa," he affirmed.

Tomorrow, the Lehendakari will participate in the inauguration of the World Future Energy Summit, participating in one of the panels with energy ministers from all over the world.

In response to journalists accompanying him on this trip, the Lehendakari evaluated the agreement to reject violence reached in Victoria between EA, Batasuna and Alternatiba. Mr López asked why the commitment entailed long-term objectives rather than being "immediate". "Why don't they reject the strategy of violence now and demand that from today forward the door on this macabre violence remains closed," he added, before concluding by stating that "one has to be more demanding in this sense".