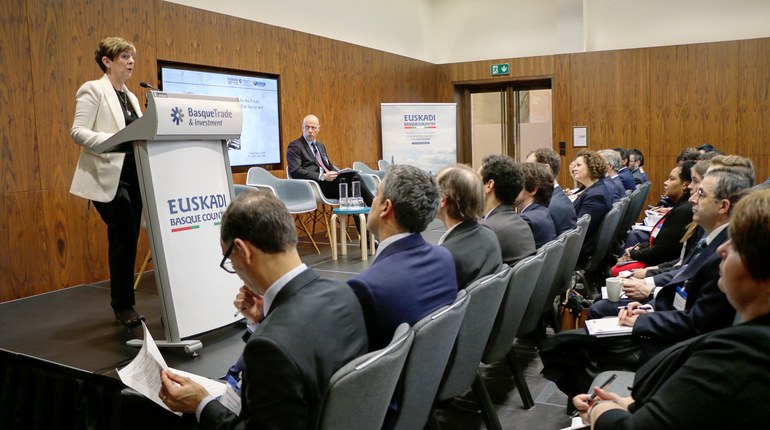 Companies from the United Kingdom and the Basque Country are meeting in London to find new ways of working together, during the trade mission led by the Basque Government’s Minister for Economic Development and Infrastructures, Arantxa Tapia, who is accompanied by around twenty Basque companies.

After the successful energy session yesterday, today has been the turn of the railway companies. The Basque Country and the United Kingdom share areas for market collaboration, particularly in sectors such as aeronautics, energy and railways.

When opening the session, Arantxa Tapia stressed the value of the Basque business fabric, which mainly comprises SMEs, which network and are suppliers to the leading trailblazing companies in the sector.

In the Basque Country, the railway sector employs 7,200 people and accounts for around 40% of the sector overall in Spain.  The railway industry in the Basque Country is therefore, without question, a key partner. Fifty-one per cent of the people working in this sector do so in SMEs and the rest in trailblazing companies. Exports by Basque companies linked to the railway sector are worth globally approximately €1.7 billion.

As far as the industrial sector alone is concerned, excluding construction, engineering and consultancy services, exports totalled over €560 million, with Europe being the main destination (€314 million).

The trend for the railway sector is positive. The annual average growth rates are expected to be around 3% over the coming 4 years, thanks to the new railway lines being built around the world, both for metropolitan and high-speed services.

In the United Kingdom, the sector's contribution to the GDP was £36 billion, equivalent to 2.3% of the GDP. It also generates 600,000 direct jobs, which is equivalent to 1.7% of all jobs and generates tax revenue of £11 billion. This last year, private investment in railways was £925,000 and government support stood at £4.2 billion. It is therefore a very important market where Basque companies are involved in partnership projects.

The railway sector in the Basque Country

The sector in the Basque Country has a large number of companies in each of the subsectors of the value chain: from construction to engineering firms, maintenance companies, etc, along with equipment and component, electrification, telecommunications companies, etc. This means that continuous innovation and technological innovation are essential for their survival.

We can likewise find small and medium-sized and large companies that are leading the sector worldwide thanks to the cutting-edge solutions that they offer.

Those solutions have been developed and implemented in railway projects both in Spain and on international markets, where their functionality and reliability have been shown.

The wide diversity of companies and sub-sectors allows synergies to be harnessed and the supply to be adapted to the needs of each customer or project. These can be undertaken, if necessary, in a joint and coordinated way and the most appropriate and competitive technological solutions and services offered in each case.

Furthermore, it should be noted that small and medium-sized manufacturers of components play an important role that, on the one hand, complements the role of the major groups and, on the other hand, they find market niches in emerging fields of the railway sector.

Participants at the meeting

The trade mission still has two important events this afternoon.  It will first visit the London Underground control centre and its maintenance centre, followed by the event to recognise the CAF when the Spanish Embassy in London will present its Annual Award to the Basque railway company.

The London event has laid the ground for the METRORAIL event organised by the Basque Government, Macex and Terrapinn that will be held at the Bilbao Exhibition Centre-BEC next week. The trade fair will analyse the main challenges for the sector and the Basque Country will have the opportunity to showcase its potential.