Álava to host the International Wine Tourism Conference in 2019 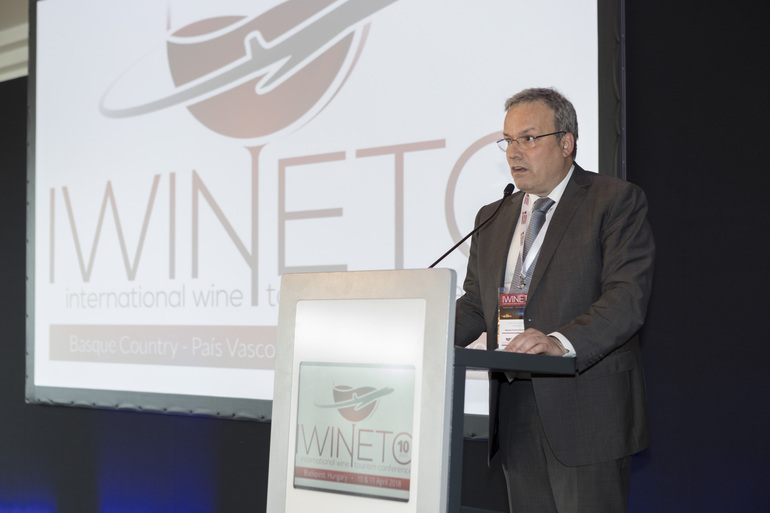 An institutional delegation (Basque Government, Álava Provincial Council and Vitoria-Gasteiz City Council), together with representatives of the Rioja Alavesa Wine Route, is in Budapest, where the IWINETC venue for 2019 has been announced

Álava has been confirmed as the venue for the XI International Wine Tourism Conference, Exhibition & Workshop (IWINETC), one of the most important wine tourism events worldwide. The Basque Government’s Minister for Tourism, Trade and Consumers, Alfredo Retortillo, gave a speech highlighting the potentials of the Basque Country, and specifically Álava and Rioja Alavesa, to host such a conference.

The Minister was accompanied by the Mayor of Vitoria-Gasteiz, Gorka Urtaran, the Álava Provincial Councillor for Employment Stimulus, Trade and Tourism, Cristina González, the Tourism and Hospitality Director, Maider Etxebarria, the Employment Stimulus, Trade and Tourism Director at Álava Provincial Council, Felipe García, and the Chair of the Rioja Alaveas Wine Route, Mariasun Saenz de Samaniego.

Retortillo explained how the Basque Country was ideally situated as a gateway to Europe and on the obvious route from Spain and Portugal to the rest of mainland Europe. He continued by stressing that Rioja Alavesa has a well-established tradition of wine making and wine tourism. “Exploring Rioja Alavesa is exploring wine. Some of the most remarkable wineries that you can visit in Europe are to be found there. From small family-run companies and their small-format artisan wineries to large and avant-garde wineries designed by internationally renowned architects".

After the announcement that Rioja Alavesa had been chosen to host IWINETC 2019, Minister Retortillo expressed his satisfaction for “the recognition of Álava's ability to host such conferences. It is an international conference that will attract professionals from over 50 countries and which will help to position the Basque Country, and specifically Rioja Alavesa, as one of the leading wine destinations. If food and wine tourism is already one of the main reasons that people visit us, IWINETC 2019 will boost and recognise its prestige”.

The Mayor of Vitoria-Gasteiz, Gorka Urtaran, stressed the importance of his city being the international capital of wine tourism 2019 when it hosts this conference. “We are excited and ready to welcome not only professionals from many different countries, but also to be in the spotlight for several days of the tourism linked to wine culture, which is one of the showpieces of our land and a booming tourist sector. Hosting the conference will be highly beneficial for Vitoria-Gasteiz, for the Rioja Alavesa region and for the country”.

The Mayor expressed his appreciation for “the important work of loving the land, of understanding wine, of caring for the culture, of studying agriculture, of innovating, of offering science and wine making, and the dedication of the Álava wine sector that ensure that the name of Álava, the Basque Country and its capital, Vitoria-Gasteiz, is known around the world”.

Cristina González, the Álava Provincial Councillor for Employment Stimulus, Trade and Tourism, expressed her pride at objective having been achieved. “Wineries and wines are our calling card abroad and the hosting of this conference is going to give a great boost to the international and national promotion of Rioja Alavesa as a wine tourism destination par excellence. We need to organise first-rate events related to wine, and this conference, which is one of the most important for the sector worldwide, is such an opportunity. It will also mean that hundreds of visitors will come to Vitoria-Gasteiz and Álava during the low season”.

The XI IWINETC will involve 2 days of speakers in Vitoria-Gasteiz and a two and a half day workshop in Rioja Alavesa. The workshop will bring together wine tourism product suppliers and travel agencies, along with tour operators specialised in marketing wine tourism.

The event will also have a large exhibition area for suppliers of wine tourism products, including associations, tourist offices, wine museums, hotels and wineries.