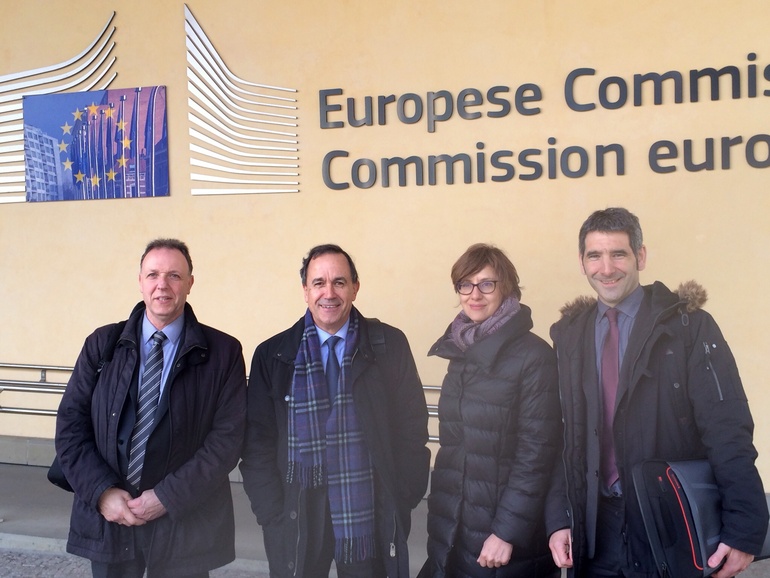 The Vice-Minister of Vocational Training, Jorge Arévalo, along with Planning and Organisation leader Niko Sagarzazu and Advanced Learning and Technology leader, Rikar Lamadrid, accompanied by the Basque Country Delegate to the EU, Marta Marín, has a top-tier work agenda set in Brussels. These meetings are being held at the behest of Europe, which confirms that the European Commission is interested and is following Basque Vocational Training.

Basque contribution to the G7 Summit on future employment

In this regard, the European Commission's Cabinet for Employment and Social Affairs, after hearing Vice-Minister Arévalo, stated that Commissioner Marianne Thyssen would draw support from the presentation on content given by the Basque Country today, to prepare the European approach for the upcoming G7 Summit, bearing on development of the new professional skills required by the fourth industrial revolution, and the new kinds of jobs that are arising--and that will arise--based on this huge change. Indeed, jobs of the future are one of the current G7 Canadian presidency's 5 priorities, and one of the central topics to be addressed at the next Summit, the 8 and 9 June in Canada, where Commissioner Thyssen will present Europe's proposal. The European Commission is including this issue in its objectives for 2025, while the Basque Country is working on it as an objective for 2023, implementing it through the V Basque VT Plan.

The European Commission's interest in the Basque Country is no coincidence. Currently, Basque VT has around 5,700 students who are training in High-Performance Cycles (through ETHAZI methodology), a methodology that offers students the training they need to acquire new skills that are already required by the aforementioned future challenges.

What's more, both cabinets have mentioned their interest in their Commissioners, Tibor Navracsics (Education and Training) and Marianne Thyssen (Employment Social Affairs and Inclusion) making an on-site visit to the Basque Country to get to observe the Basque VT model.

After an initial meeting yesterday afternoon with the Director of Competitiveness, Eric Mamer, the agenda for today was rounded off with several different meetings. On one hand, Arévalo held meetings with European Commissioner Cabinet Chief of Education and Training, Tibor Navracsics, and European Commissioner Cabinet Chief of Employment, Social Affairs and Inclusion, Commissioner Marianne Thyssen. However, the agenda also includes meetings with other Commission leaders: at noon, there was a meeting with the Chief of the Skills Unit for Digital Economy, Alexander Riedl, and this afternoon, there will be a meeting with the Chief of the Employment Unit, Dana-Carmen Bachmann, and with the EU VT manager, Joao Santos.

During these meetings, Arévalo has shared the Basque VT model's strategic vision with European Commission leaders, and how this model meets future needs, especially those posed by the fourth industrial revolution. Europe selected Basque Vocational Training as a point in reference in future European VT and Employment policy for 2025, as made clear last November, during European VT Week events.

Within the context of this collaboration and joint work that the VT Vice-Minister has been carrying out over the past years with European Institutions, and after the visits made by members of different Directorates General headquartered in Brussels to the Basque Country in 2017, the European Commission continues to seek in-depth knowledge of Basque VT strategy. The EU's interest in Basque Country VT is mainly focused on its ability to transform complex global challenges into specific responses, and as reiterated on other occasions, on the VT system's ability to support people and companies, prospering in an increasingly-complex world. Sights are always set on the horizon, with excellence and the shared work between VT centres and socioeconomic agents.

With the support of the Basque Delegation to the EU, the Basque Government has enjoyed a firmly-established collaboration with European institutions for years, placing the Basque Country as a European reference point in vocational training and educational innovation, thus meeting the future needs of the European job market.

The Vice-Minister explained to community spokespersons how Basque VT is addressing the issue of training people, to be in step with evolution in production industries. In this regard, emphasis was placed on new teaching and learning methodologies implemented at Basque VT centres; methodologies that seek out collaborative, challenge-based learning, with which professionals acquire the skills needed by jobs of the future.

Jorge Arévalo and his team also explained to European Commission how the Basque Country's Vocational Training centres work as a network, and how they tackle issues such as connectivity and digitalisation, which are essential in the fourth industrial revolution. In this whole context of smart systems, a new concept of vital importance is arising that Basque VT always bears in mind: Sustainable Human Development, which means moving forward toward 4.0 values.

The European Commission has also shown interest in the support given by Basque Vocational Training to companies, especially SMEs, in applied innovation, so as to improve products, production processes and their services.

These meetings with Basque VT are taking place at a time when the European Commission is drawing up budgets and setting priorities for upcoming programmes and lines of work during the 2021-2028 period. Defending Basque interests and putting the work carried out by the Basque Country on the European agenda, positions and strengthens the Basque Country on the future European agenda for training and specialisation in fields such as Industry 4.0 and the digital sector.