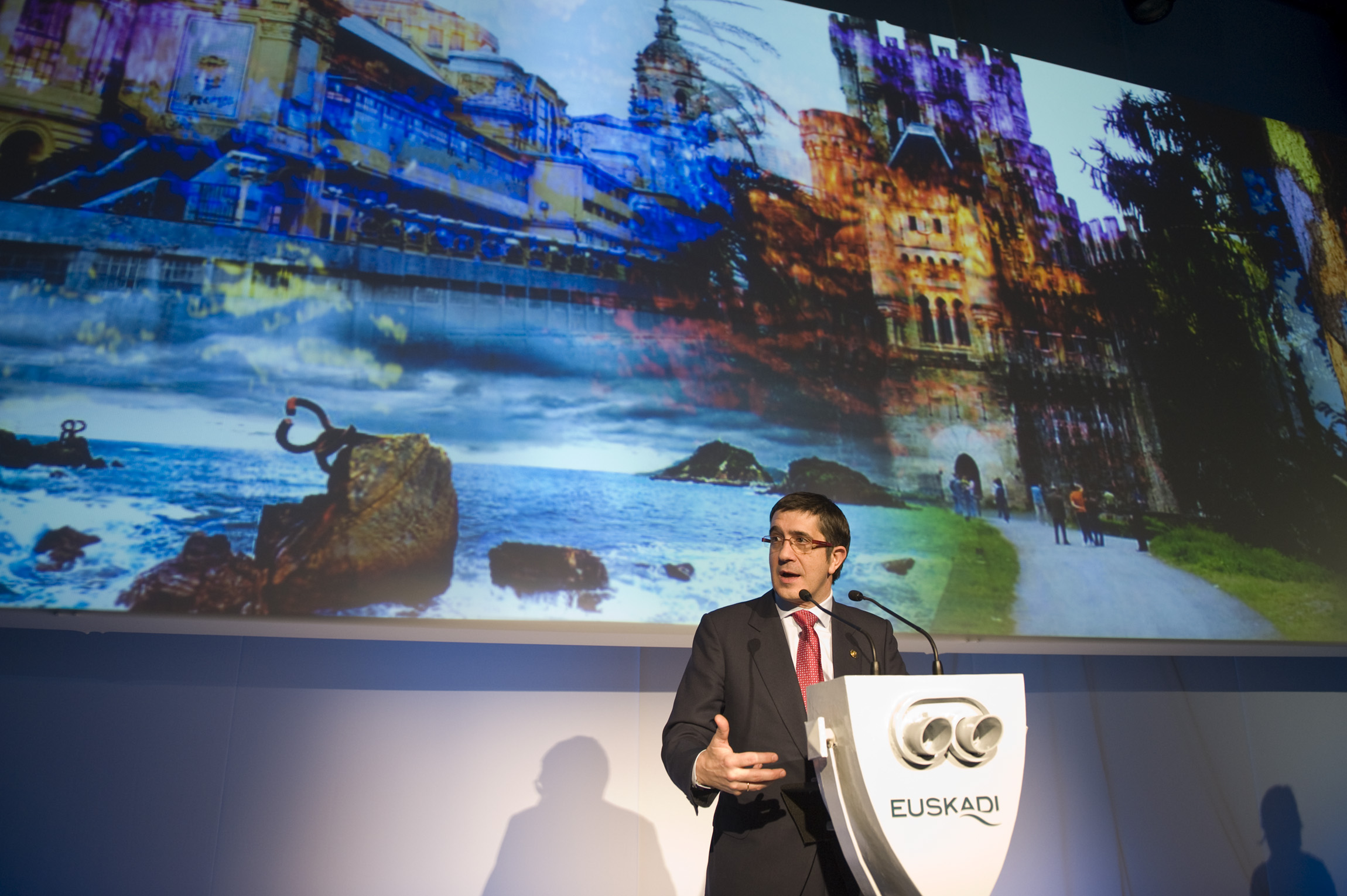 Approximately 600 people, including institutional representatives working within the areas of culture, economy, sport and tourism, attended the event in the Real Fábrica de Tapices in Madrid. The Lehendakari drew attention to the fact that the Basque Country "is already a first-class tourist destination." In 2010, all records in terms of tourist arrivals to the Basque Country were broken.

Iñaki Gabilondo and the actress Miren Ibarguren featured as presenters during the event and the band La Oreja de Van Gogh performed for those in attendance.
The Gala came to a close with pintxos (tapas), prepared by the new generation of Basque chefs, Fernando Canales, Rubén Trincado and Senén González, and gifts created by the designers Modesto Lomba, Mercedes de Miguel, J+G and Ion Fiz.
The event was broadcast live on the Internet via tveuskadi.net and the Irekia site.

A year has gone by since the Lehendakari, Patxi López, presented "The Basque Country, Savour It", the new slogan under which tourism in the Basque Country is promoted around the world. One year later, once again in Madrid, he took stock of the best year in the history of Basque tourism: in 2010, all records in terms of tourist arrivals to the Basque Country were broken.

Patxi López: "There are thousands of ways of being Basque"

The Lehendakari, Patxi López, drew attention to the success Basque tourism enjoyed last year: "It was a difficult year, but if any sector has shown itself to be particularly strong this year, if any sector has offered hope in times of uncertainty and led us along the road to recovery, this has been the tourism sector."

The Lehendakari drew attention to the fact that, pending the release of the figures for December, "everything suggests that 2010 will prove to be the best year in the history of Basque tourism. The Basque Country is already a first-class tourist destination for a variety of reasons. The Basque Country offers visitors a wide range of tourist attractions and a peaceful setting. Furthermore, our tourism policy has proved capable of projecting an image of the real Basque Country, bringing together tradition and modernity, with the invaluable support of our ambassadors. I would like to take this opportunity to thank you all, each and every one of you, for your help."

Patxi López thanked the "ambassadors" of Basque tourism for taking on the commitment to "make our region more open and welcoming. You have shown the world that there are thousands of ways of being Basque, as many ways as there are Basques in the world." "The Basques have a lot to offer and a lot to learn. Tourism is precisely this: a focal point for bringing people together, for cultural and emotional exchange. This year, thanks to you, we have enriched this exchange. I hope we can continue to do so in the future."

The best year for Basque tourism

This tribute to the "ambassadors" coincides with the end of what is, to date, Basque tourism's best year. In 2010, all records in terms of tourist arrivals to the Basque Country were broken. Pending official figures for the month of December, last year has already exceeded the figures for 2009 in its entirety and tourism has witnessed 17 months of uninterrupted growth.

The increase of tourists between January and November represents a rise of more than 12%, both in terms of arrivals and overnight stays, with respect to 2009. The Basque Country received a total of 2,087,669 visitors in this period, according to the Basque Institute for Statistics (Eustat). Attention should be drawn to Vitoria, which witnessed sustained growth of 24% over the course of the year, and Álava, with 23%. The arrival of people from other countries is particularly relevant, with average growth of +18.8% over the course of 2010 when compared with 2009.

These excellent results coincide with the new strategies spearheaded by the Basque Government. Last year, with the design of a new tourism brand and the "Basque Country, Savour It" slogan, the Basque Country has been positioned over one of its strongest attributes with very successful results.

Furthermore, the Government has passed a new Marketing Plan, with fresh policies to promote and redefine Basque tourist products, enabling us to consolidate our potential. The plan presents the Basque Country as a land that is open, which warmly welcomes visitors, which is friendly, which has charm and that holds real surprises for those who have yet to discover it.

Attention should also be drawn to the positive results of the collaboration with Turespaña to promote the Basque Country overseas.