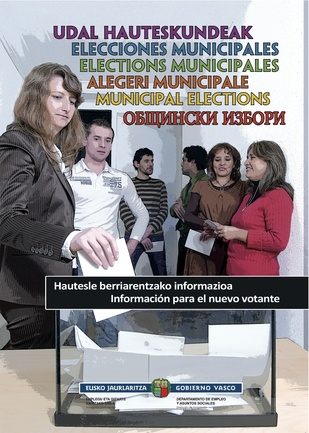 The voter registration period ends on the 15th of January

The Basque Government's Department for Employment and Social Affairs has published an information guide for immigrants on how to vote in the forthcoming elections. Information is available from local councils, from the provincial delegations of the Electoral Census Office or by phoning 901.101.900

The Basque Government's Immigration Office has begun to distribute a guide that contains information on the requirements for immigrants to enable them to vote in the municipal elections on the 22nd of May.

The information has been sent to all the immigrants' associations in the Basque Country and to the local council immigration officers. The publication, published by the Department for Employment and Social Affairs, points out that the registration period to be able to vote and to choose the individuals who will run the local councils of Spain over the next four years ends on the 15th of January. The guide is available in the most common languages (French, Rumanian, English and Bulgarian) amongst immigrants entitled to exercise this right to vote in the municipal elections, as well as in Spanish and Basque. The citizens of these countries will be able to vote if they are over 18 years of age, have not been barred from voting, are on the relevant municipal electoral roll and are legal residents in Spain.

Those people who wish to exercise their right to vote must also have legally resided in Spain for an uninterrupted period of at least 5 years prior to being registered on the electoral roll, except in the case of Norwegian citizens, in which case only 3 years are required. European Union citizens (Germany, Austria, Belgium, Bulgaria, Cyprus, the Czech Republic, Denmark, Slovakia, Estonia, Finland, France, Greece, Hungary, Ireland, Italy, Latvia, Lithuania, Luxembourg, Malta, the Netherlands, Poland, Portugal, Sweden, the United Kingdom and Rumania) can vote in the municipal elections as well as in the elections for the European Parliament.
To this end, they need to file a formal statement of their desire to exercise the right to vote in the local Council where they appear on the electoral roll. Further information is available from local councils, from the provincial delegations of the Electoral Census Office or by phoning 901.101.900.