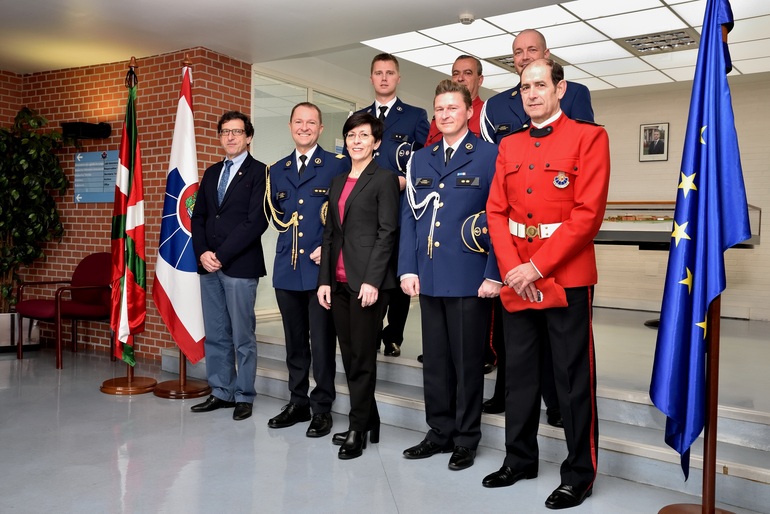 An Antwerp police delegation, led by its Chief Commissioner, Serge Muyters, is visiting Ertzaintza facilities during their stay.The visit, during which the delegation has met with the Basque Minister for Homeland Security, is part of the collaboration undertaking, signed in 2015, by the Flemish and Basque Governments, and in the subsequent joint declaration for greater cooperation between the respective police forces, signed in 2017, by the  Basque Ministry of Homeland Security and its counterpart in the city of Antwerp.

The purpose of the collaboration agreement, signed in Antwerp on 13 March 2017 by the Basque Government’s Minister for Homeland Security, Estefanía Beltrán de Heredia, and the head of the Ertzaintza, Superintendent Jorge Aldekoa, and by the Mayor of Antwerp, Bart de Wever, and the head of the city’s police force, Serge Muyters, is to exchange experiences both in the area of combating delinquency and its prevention and in tasks related to security and law enforcement, in particularly, with regard to combating terrorism, organised crime, the international trafficking of stolen vehicles, document forgery and drug trafficking.

Furthermore, the document also includes knowledge sharing in areas such as police training and development programmes, organisational structures and new technologies.  It also envisages the mechanisms for exchange visits to the respective facilities.

As part of that programme, in 2017, the Ertzaintza and the Antwerp Police Force organised a series of visits and joint training sessions to enhance their respective preparation in the fields of technology, preventing radicalisation and police intervention.

The purpose of the current visit by the Belgian officers to the Ertzaintza facilities is to set up new exchanges in 2018, to strengthen alliances and consolidate the cooperation between both institutions. The visit will run between 6 and 8 March and the Flemish police officers will have the opportunity to discover the Iurreta and Erandio headquarters and operational centres, including the premises of the Central Intelligence Office. They are also going to attend a demonstration by the Bizkor PRI (Prevention and Immediate Response) group and learn about the technical details of the “Ertzaintza Plan regarding Radical Islamism".