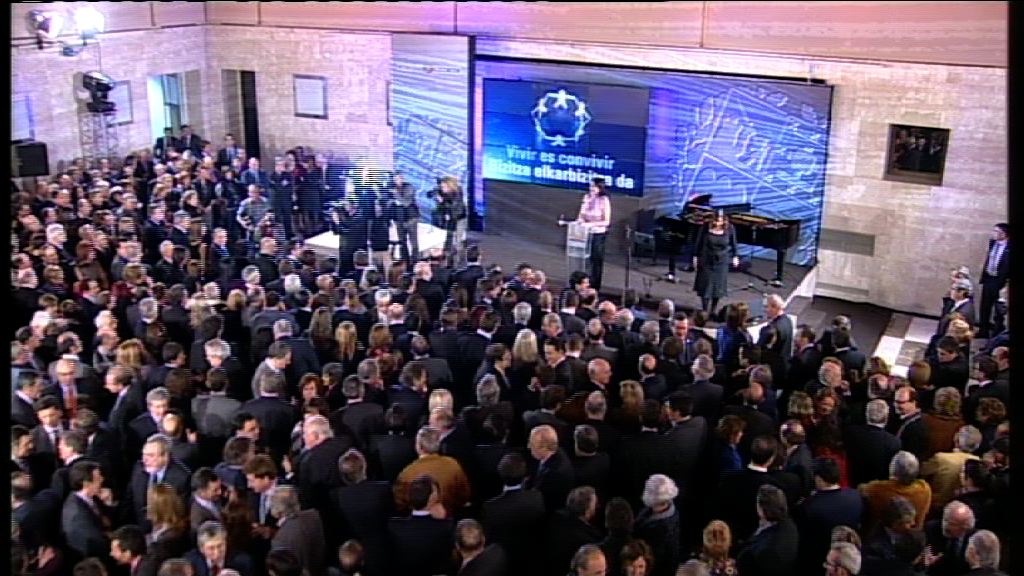 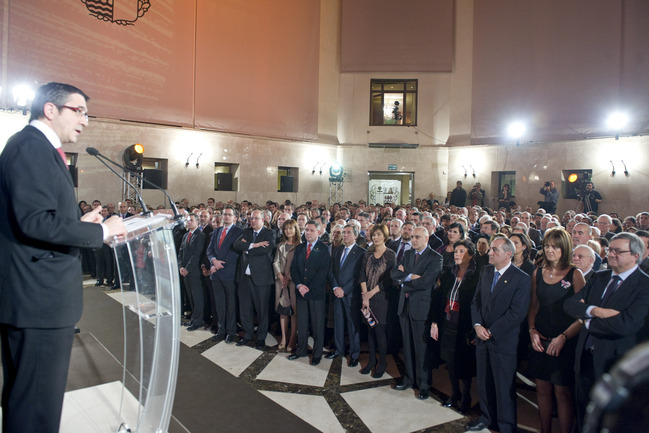 The traditional Christmas Reception for Basque Society was attended by hundreds of people from the institutional, political, business, economic, trade union, cultural and social spheres of the Basque Country

The Lehendakari, Patxi López, used the Christmas Reception for Basque Society to send a message of "hope" for the future. An optimistic message about the economy, where the Lehendakari pointed out that even though 2011 would be a difficult year, "we will clearly begin to turn things around", and that that would also be true of the fight against tourism. López stressed his "conviction that we are nearing the end of the nightmare". After recalling the victims of terrorism, he expressed his confidence in the current hardline anti-terrorist policy of zero tolerance as it has forced left-wing Basque Nationalists to begin to react. "If that section of society reacts, and I trust that they will go even further and hopefully sooner rather than later, it is because we have made it clear that there is only one possible path. That path is the one that democracy sets with its rules and its values, and where there is no room for siding with terror," he stressed.

"Hope" and "new opportunities" are the future that the Lehendakari, Patxi López, foresees for the Basque Country in 2011. It will be a year when "we will clearly begin to turn things around" as far as the economy is concerned and when "freedom will finally be enjoyed by everyone". During his speech, López recalled the victims of terrorism and pointed out that he is convinced "that we are nearing the end of the nightmare". "I therefore hope that next year will see a stronger new Basque Country emerge that is not frightened of blackmail or terrorism," he added. Freedom that will enable the Basque Country and its citizens to progress further, as despite "the uncertainties and changes", there are also "new opportunities" where the Lehendakari is committed to tackling them "as a united country". "We have had to bear the worst of the crisis, but the Basque Country has been able to react as a united country and we have managed to come together. All the institutions have worked together," he went on to say.

During the event, the campaign commercial was played that the Basque Government and EITB had produced to showcase the values of the Democratic Coexistence Plan. According to the Lehendakari, the plan "truly symbolises the country that we love". "A Basque Country that is open to the world, a modern and multi-faceted country, with free citizens not living in fear, a society constructed by everyone and made up of different people with equal rights," he stressed.

During his speech, the Lehendakari explained that the Basque Country "has been able to weather" the economic downturn. "We have less unemployment than the European average and half the rate of the rest of Spain", as we have already begun "to create wealth again" and "we are proving ourselves able to create new jobs". However, that is not going to stop the Basque Government from adopting austerity measures and far-reaching reforms "to consolidate the foundations of our future wellbeing". "The sacrifices, the austerity policies, the current reforms are not a whim, but we are implementing them to guarantee universal public services, social benefits and the development of a competitive, committed and sustainable country," he clarified.
Löpez pointed out that it is "fundamental to increase the dimension, productivity and competitiveness of the Basque economy" to turn the economy around and encouraged the business world "to go out into the world to look for new markets, new business opportunities for our products".

Education and training will be another of the core areas underpinning the actions of the Government. According to the Lehendkardi, "the country's commitments" focus "on generating knowledge that we are able to transfer to our companies; on internationalisation; and on permanent innovation, which will provide added value to everything we do". A greater emphasis on English and new technologies in schools will also be part of this approach.

During his speech, the Lehendakari also paused to remember the former Minister of the Basque Government, Sabin Intxaurraga, who had recently passed away and whose funeral was being held at that very time in Zeanuri. "I want to remember Sabin Intxaurraga, as he was always faithful to his ideas and helped to construct this country as a mayor, as a minister or as a citizen," words that were warmly applauded by the guests.
The Lehendakari ended with the traditional Christmas toast, "a symbolic toast so that the coming year is a time of less discord and greater coexistence for everyone who lives in the Basque Country, " he added.