The Basque Government has approved its Legislative Calendar, which sets out the priorities of the government for the next four years 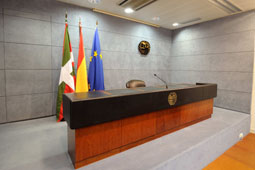 The Legislative Calendar comprises 48 initiatives, evidence of the "leadership" of the Lehendakari

At the proposal of the Lehendakari, at its meeting today, the Basque Government approved the Legislative Calendar for the ninth legislature, 2009-2013. The aim of the calendar is to coordinate the development of the set of legislative initiatives required in order to meet the objectives set by the government for the next four years in a number of different areas.

At its weekly cabinet meeting, the Basque Government approved its Legislative Calendar for the period 2009-2013. These include 48 initiatives, representing "the priorities" after government for the coming years. The calendar will be referred to Parliament to enable it to carry out its function of monitoring government activity right from the planning stage. The government spokesperson, Idoia Mendia, explained that this decision is evidence of the "leadership of the Lehendakari" and added that this government is carrying out a "planned, coherent and coordinated" policy of government.

At the customary press conference following the weekly cabinet meeting, the government spokesperson, Idoia Mendia, outlined the 48 legislative initiatives that the Basque Government intends to put into motion over the next four years. These include, among others, the Municipal Law of the Basque Country, the Basque Savings Banks Law and the Overall Assistance Law for victims of gendered-based violence.

The Municipal Law of the Basque Country, the Basque Savings Banks Law and the Overall Assistance Law for victims of gendered-based violence are some of the most important of the 48 legislative initiatives.

The calendar will be referred the Basque Parliament in order to enable it to monitor government activity from the planning stage in compliance with the government's commitment to "democratic and ethical regeneration".

Moreover, the agreement establishes the commitment of Departments to send the General Coordination Secretary a six monthly report on the level of compliance with, or modification, if appropriate, of the undertakings established in this calendar, in order to facilitate its monitoring and evaluation.