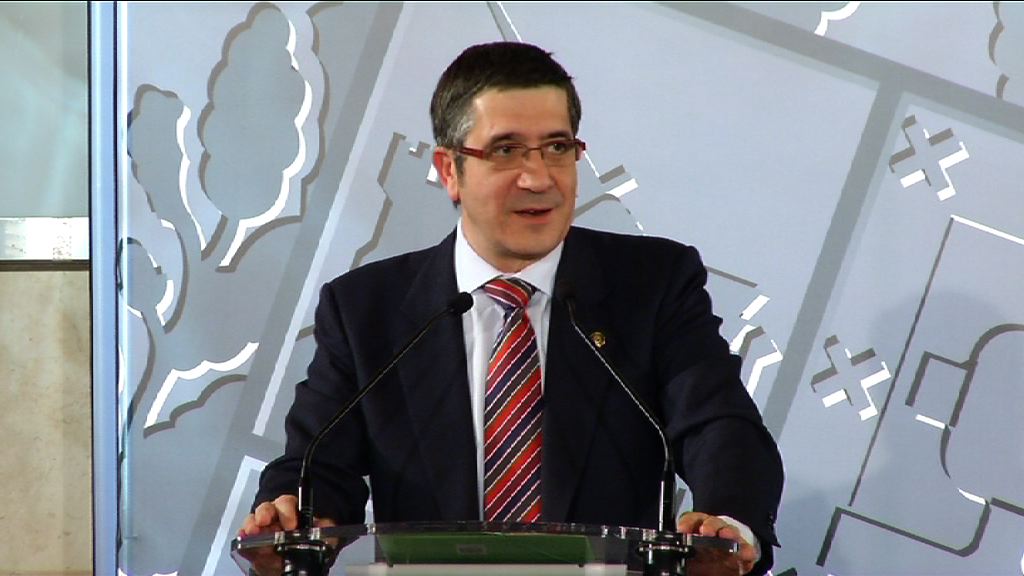 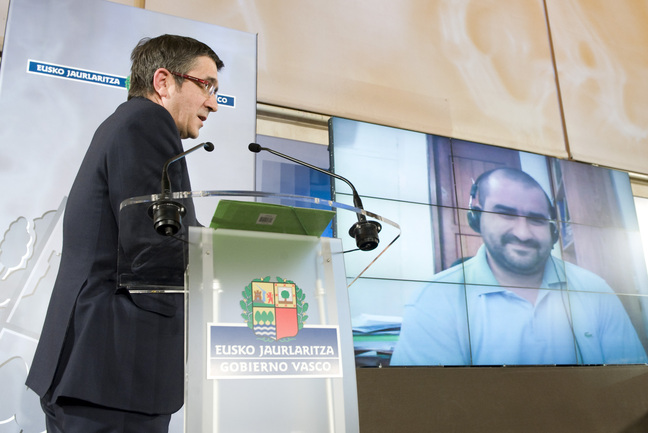 Professionals from the worlds of business, finance, health, culture, university and cooperation, along with members of the Euskal Etxeak celebrated Christmas at the Lehendakaritza.

The Lehendakari, Patxi López, hosted the official reception for Basques living abroad, which yet again was held at the Lehendakaritza during the Christmas holidays. The event was attended by people who usually live and work in other countries. They are from the worlds of business, finance, health, culture, university and cooperation, along with members of the Euskal Etxeak (Basque cultural centres) that are scattered around the world. The guest list included Javier Aguirresarobe, the director of photography, who was unable to personally receive the Universal Basque Award to honour him this year as he was filming in the United States. The Lehendakari thanked the "pride" with which the Basques abroad bore the name of the Basque Country and encouraged them to be "active players" in consolidating the image of the Basque Country around the world. "We Basques know how to combine our strengths, as we have done so this tough year of recession. The Basque Country wishes to tackle the new global modernity with pride. We want to continue to be Basques in an open world. And people such as yourselves have a fundamental role to play," he stressed.

Christmas is when many Basques residing abroad return to the Basque Country to be with their family and friends. This trip home meant that many of them could be present at the traditional reception hosted by the Basque Government for Basques residing abroad. Hundreds of people from fields as wide ranging as business, culture or cooperation were invited to the Lehendakaritza where the Government wanted to recognise their role in consolidating the image of the Basque Country around the world. The Lehendakari, Patxi López, stressed the importance of the Basque abroad in the building of a Basque Country that is part of the "new global modernity". "The Basque Country is a country that wishes to tackle the new global modernity with pride. We want to continue to be Basques in an open world. And people such as yourselves have a fundamental role to play," he stressed.

Around 200 people from different fields including business, culture, cooperation and members of the Euskal Etxeak were invited to the Official Reception by the Basque Government for Basques residing abroad. The Lehendakari, Patxi López, and the General Secretary for Foreign Affairs, Guillermo Echenique, were at the event to recognise, among others, the work by the COOPERA NGO in the Democratic Republic of the Congo and the Solidaridad Internacional NGO in Nicaragua. The Lehendakari also chatted for a few minutes by videoconference with Alfonso Peña, the aid worker from Managua. Other people at the event included Eduardo Iturbe, originally from Vitoria and who has been living in the USA for the last two decades due to his job at INTEL-USA, and Javier Arias, BBVA Head Representative to the EU.

The spotlight was on Javier Aguirresarobe, the winner of the 2010 Universal Basque Award, as he had not been able to collect the award personally as he was working the USA, but was able to attend on this occasion.

During his speech, the Lehendakari asked the Basques abroad to play an "active" role in the international recognition of the Basque Country as "you are the image of the Basque Country around the world and that makes you our best ambassadors," he stressed. López, who highlighted tools such as the Irekia website or the Etxepare Institute as "meeting points for Basques from here and there", pointed out that the presence of all these persons living abroad had to be used "as a source of future contacts" in the "task of opening up the Basque Country to the world: for economic progress, for social well-being, to boost tourism and, even, to delegitimize violence". "We are progressing towards the end of terrorism to ensure a common freedom. The emphasis is on the coexistence of different Basques, with equal rights. And we have to build a Basque Country that is even stronger, with better cohesion and unity," he added.

The Lehendakari said he was convinced that the Basque Country "is changing" and said that the Basque Country cannot afford to be left behind on the path to modernity, but rather has to grasp the opportunities of the new economy and of being a global presence. "We want to be heard and we are demanding a democratic world government that stops out-of-control powers," he concluded. López criticised the debates in which "we get bogged down" in the Basque Country regarding "what being a Basque is or is not". He gave the "personal successes in Manhattan, China, Brussels or Nicaragua" of the Basques whose work has been recognised as an example that "the greatest wealth is in plurality". "You are all a lesson for us," he added.

López ended by asking the Basques abroad to help build a Basque Country that is "competitive, professional, supportive, creative, open to the world and capable of interrelating", by wearing the name of the Basque Country with "pride".