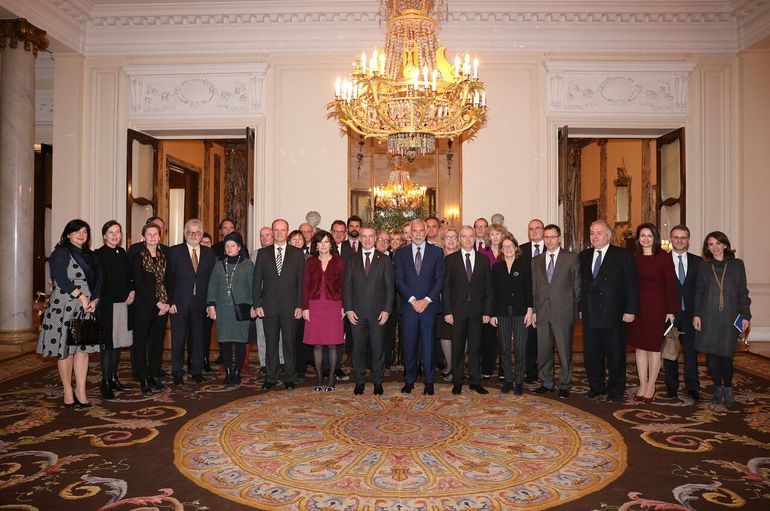 Lehendakari Iñigo Urkullu, the Basque Premier, held a meeting with ambassadors from across the European Union in Madrid today. The meeting was the opportunity for the Lehendakari to share the Basque economic and social development model and to discuss its current political agenda. The Basque human development model, the culture of the agreement, sustainable growth, employment, the competitiveness of the economy, coexistence and self-government were among the issues discussed at the meeting.

The meeting was held at the Italian Ambassador’s residence in Madrid and Lehendakari Iñigo Urkullu was accompanied by the General Secretary for External Action, Marian Elorza, and by the Director of European Affairs, Mikel Anton. Around 25 ambassadors were at the event.

Lehendakari Urkullu argued that “the most competitive countries are those that have the greatest level of development and social equality”. In this regard, he explained that the social model of the Basque Country prioritises ensuring human development and cohesion, with two-thirds of the operating budget earmarked for social policies. At the same time, and in order to increase competitiveness, the Lehendakari stressed the allocation of EUR 8.8 billion until 2020 to measures coming under the “Plan 4I: Investment, Industry, Innovation and Internationalisation”. This is all aimed at increasing the weight of industry to 25% of the GDP and to create “more and better employment”.

The Lehendakari outlined the 15 Nationbuilding Targets established in its Government Programme, which include: cutting unemployment to under 10%, 20,000 people completing their first work experience, achieving 100 strategic innovation projects, positioning the Basque Country among the top 4 European countries in gender equality, cutting the poverty rate by 20% and reducing greenhouse gas emissions by 20%.

The Lehendakari also pointed about that the Basque Government has a Human Rights and Coexistence Plan. Its priorities include recognising the unjust harm suffered, the public policies of truth, justice and redress in solidarity with all victims, the unilateral disappearance of ETA, a new prison and social reinsertion policy, and the response to the new emerging challenges linked to coexistence.

Given the existence of differing majority social wills in Catalonia, the Basque Country and Spain, the Lehendakari believes it necessary “to embark on a new stage, based on dialogue with a real willingness to compromise”. The Lehendakari argued that "the self-government ideal lies in concord and coexistence between different identities, based on mutual recognition and respect”. In this regard, he gave as an example the agreement reached regarding the Basque Economic Agreement and Quota, the “keystone of Basque self-government”. This agreement could be carried over to the political arena, according to the Lehendakari, by recognising the special nature of the Basque Nation.

Before the ambassadors of the European Union, he advocated setting up legal channels to allow the political Communities that, by means of the express decision of their self-government parliamentary institutions, wish to consult their citizens about their future, to be able to do so. This is along the lines, he added, of a proposed "Clarity Directive" within the European Union.

The Basque Country is finalising the document that sets out the Basque vision of the future of the EU in the framework of the process set up by its President, Jean Claude Juncker. The Lehendakari defended the need for the European Union "to return to its founding values”.

In the opinion of the Lehendakari, in order to achieve an ever more closer Union between the Peoples of Europe, it is time to address, from a shared responsibility approach, the effective participation in the European governance of the Governments with legislative powers that reflect the realities of non-nation states. “This is the horizon of our project,” he stressed.

This has been the fourth meeting that the Lehendakari has held with the European diplomatic corps: the first in January 2013 (Madrid), the second in June 2014 (Madrid), and the third at the Miramar Palace in Donostia/San Sebastián in 2016.