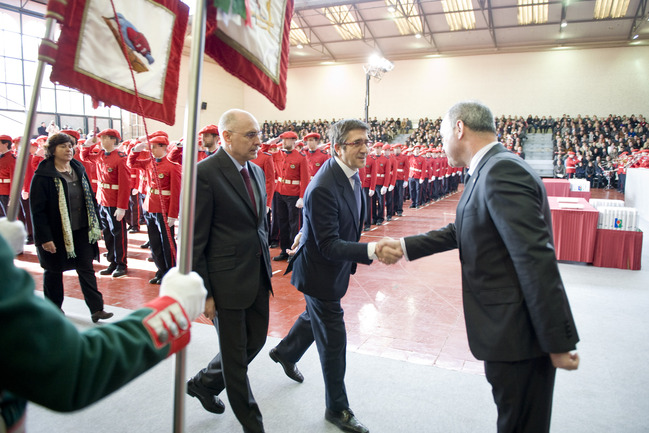 This morning, the installations of the Basque Police Force in Arkaute provided the setting for the XXII Graduation Ceremony of Basque Police Officers. The event was attended by the Lehendakari, Patxi López, and the Minister for the Interior, Rodolfo Ares. The Lehendakari expressed his hope that "in the very near future officers will no longer have to dry their uniforms inside their houses, but rather, will be able to hang them outside in the fresh air of a new Basque Country characterised by peace and freedom." "When you carry out your duties, be proud to belong to this force, be proud of the sacrifice made by your colleagues in the fight against terrorism: we will never forget them. You should feel the same sense of pride as you serve this society each day and be as proud of your work as we are of you," he added.

The awarding of the credentials to the recently graduated police recruits took place this afternoon in the Basque Police Academy in Arkaute. The ceremony was presided over by the Lehendakari, Patxi López, who was accompanied by the Minister for the Interior, Rodolfo Ares, Government and Departmental officials, parliamentary representatives and police chiefs.

The event commenced upon the arrival of the Lehendakari, who reviewed the training provided to the new recruits, flanked by the standards that represent the twenty-one previous groups that graduated. He then took his place on the platform and the anthem of the Basque Country was performed by the musical band of the Basque Police Force.

After a few brief words of welcome from the Director of the Academy, Elena Moreno, the new Basque Police Force recruits were awarded their credentials. The Lehendakari and the Minister for the Interior personally awarded the credentials and offered their congratulations to the first twelve officers of the graduating group, whilst approximately thirty received their credentials from family members (parents, siblings and spouses) who are also officers within the Basque Police Force, having graduated in previous ceremonies.

Having awarded the credentials, the Lehendakari briefly expressed his appreciation for the newly recruited officers, which was followed by a performance of the anthem of the Basque Police Force. Finally, the Head of the Basque Police Force, José Antonio Varela, welcomed the new officers into the force and the event concluded with the traditional act of the new recruits throwing their txapelas [berets] into the air.

Having been incorporated into the Basque Police Force, the officers of the XXII graduation ceremony will have to successfully complete a one-year probation period in the destinations assigned to them in the various ertzain-etxeas [police stations] and units found throughout the Basque Country. At the end of the probation period, they will become fully fledged officers of the law.

The incorporation of 290 new police officers (247 men and 43 women) will permit the personnel serving in the Police Force to come close to the official number of 8000 officers, a figure that will be reached in 2011 with the next cycle of candidates. The new officers will also serve to rejuvenate the force, wherein a considerable number of officers are over the age of 50 (approximately 23% of the current force), and increase the percentage of female officers, currently registered at little over 10%.

The XXII graduation ceremony marks the implementation of a project to permanently renew the personnel within the Police Force via a process of offering new openings for candidates in shorter cycles, thereby ensuring that each year, at least one new group of officers takes to the streets, offering a continuous guarantee of 8000 active officers. This project will be complemented via the Plan for the Modernisation and Reorganisation of the Basque Police Force, recently presented by the Minister Rodolfo Ares in parliament, which, amongst its objectives, contemplates increasing the number of officers patrolling the streets of the Basque Country to ensure the safety of citizens.