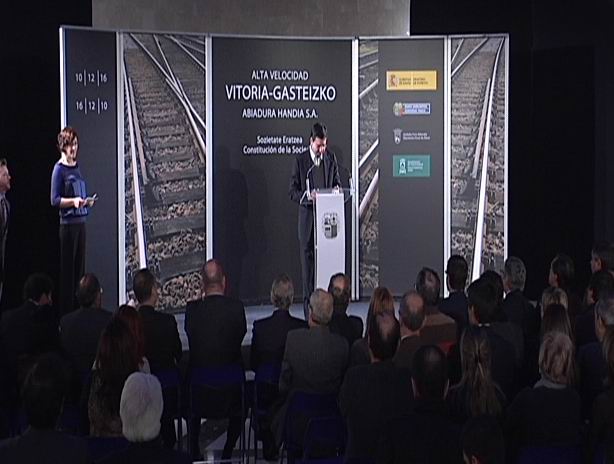 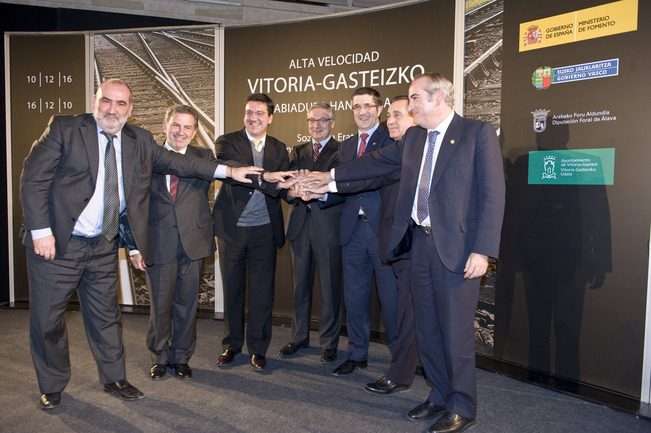 Today, the Lehendakari, Patxi López, drew attention to the institutional unity surrounding the High Speed Rail project. For the Lehendakari, this unity is a "good indication of its importance", adding that "a combined and coordinated vision was needed to guarantee efficient management in the future after years of unjustifiable delay."

These words were spoken by the Lehendakari during the ceremony constituting the Vitoria-Gasteiz High Speed Rail Partnership. The event was attended by the Minister for Public Works, José Blanco, the Deputy General for Álava, Xabier Aguirre and the Mayor of Vitoria, Patxi Lazcoz.

The establishment of this partnership by the institutions to manage the building works marks the beginning of the construction of the underground section of the high-speed rail network through Vitoria, due to be completed in 2017.

The Lehendakari drew attention to the strategic position that the remodelling of the Gasteiz rail network represents within the infrastructure of the Basque Country. He explained that the Basque Government is "firmly committed to the remodelling of the Vitoria-Gasteiz arterial rail network." Thus, the Basque Government has allocated 117 million euros to the project, a sum which represents a quarter of the total cost.

This is a "decision made by Vitoria and Álava that will benefit the Basque Country as a whole. It is not an inward-looking reform just for Vitoria. With the arrival of the High Speed Train we will be opening the city up to the outside world," the Lehendakari affirmed.

The High Speed Rail will connect the three capital cities in the Basque Country with the rest of Spain and Europe "with no traffic jams and airport delays", which is "fundamental for our development and well-being in the future, given that a society's progress is closely linked to its capacity to open up to and connect with the outside world, " the Lehendakari concluded.