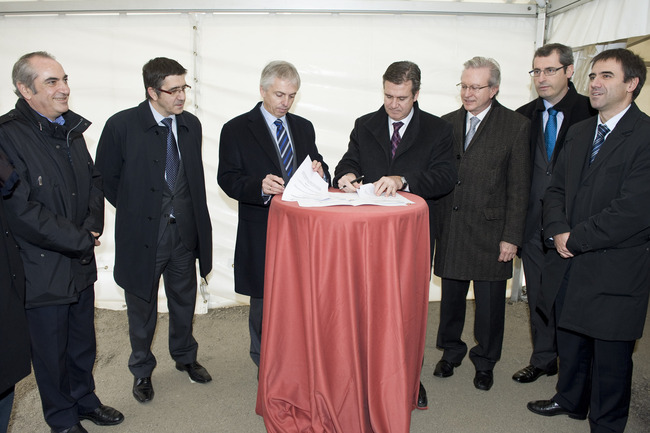 Within the Basque Government's commitment to innovation, the new Tekniker park in Eibar represents a "technological reference point" that will "steer" all activities relating to innovation in the Basque Country. These words were spoken by the Lehendakari, Patxi López, during the ceremony of the laying of the foundation stone for this new centre that will "generate wealth, employment and knowledge, which are essential for our well-being and progress in the future." Tekniker will provide employment for 1500 people following an investment of 77.5 million euros. The park will focus its efforts on energy and health, "two of the most pressing issues before us and the two areas in which we are making considerable progress from our little corner of the globe," the Lehendakari stated. Mr López added that he expected Tekniker to help the Basque Country "occupy a leading position within these two areas, sectors wherein technology plays a significant role and that are enormously important for the economy, which we must nurture and encourage to grow."

One hundred and thirty thousand square metres, 77.5 million euros in investment and 1500 jobs are the significant figures linked to the construction of Eibar's new Tekniker technology park. Beyond these figures, the importance of this technological centre is resides in its commitment to innovation and the added value it can offer companies. This is especially true for health and energy, two particularly important areas that the Basque executive has been striving to transform. "This technology park will help to ensure that our voice is heard in this debate. It will ensure that the Basque Country occupies a leading position within these two areas, sectors wherein technology plays a significant role and that are enormously important for the economy, which we must nurture and encourage to grow," stated the Lehendakari, Patxi López.

Copies of today's newspapers along with coins and the agreements signed today, which have made the construction of the new Tekniker technological park possible, were laid beneath the foundation stone of the buildings of this technological centre, set to be completed in 2013. The Lehendakari was joined in this ceremony by the Minister for Innovation, Trade and Tourism, Bernabé Unda, the Minister for Housing, Public Works and Transport, Iñaki Arriola, the Deputy General for Gipuzkoa, Markel Olano, the Central Government delegate in the Basque Country, Mikel Cabieces, the mayor of Eibar, Miguel de los Toyos, and the managing director of Tekniker IK-4, Alejandro Bengoa.

The Lehendakari stressed the "need to innovate", especially in times of crisis, and to turn the "Basque Country into a Metropolis of Talent capable of transforming today's knowledge into long-term wealth." According to Mr López, our lack of natural resources means that we must "make a firm commitment to entrepreneurs and to innovation as the principle source of wealth for the Basque Country." "To this end, we must focus on two things: improvements in training for our young people and the creation of solid networks for research and innovation," he added.

Mr López also drew attention to the fact that the Executive's commitment to innovation has been translated into the provision of financial support (4 million euros for the IK4 building in the Eibar Technological park, 2 million for the anti-crisis + Basque 09 Package and another 2 million for the 2010 Extraordinary Plan, a further 2 million in the 2011 Budget and, after some negotiation, 10 million euros in the form of repayable advances from the Ministry of Science and Innovation). The Lehendakari pledges to "continue to strengthen investment" by increasing resources allocated to 3I&D [innovation, inventions, investigation & development] and improving coordination and efficiency through the Competitiveness Plan approved in June and the Science, Technology and Innovation Plan currently under development. "We want R&D&I to be part of each and every one of our actions, each and every one of our policies, as the pillar on which to build growth, generate employment, promote equality and social inclusion in the Basque Country in the future," Mr López stated.