The Lehendakari opens the World Forum of Regions in Vitoria-Gasteiz 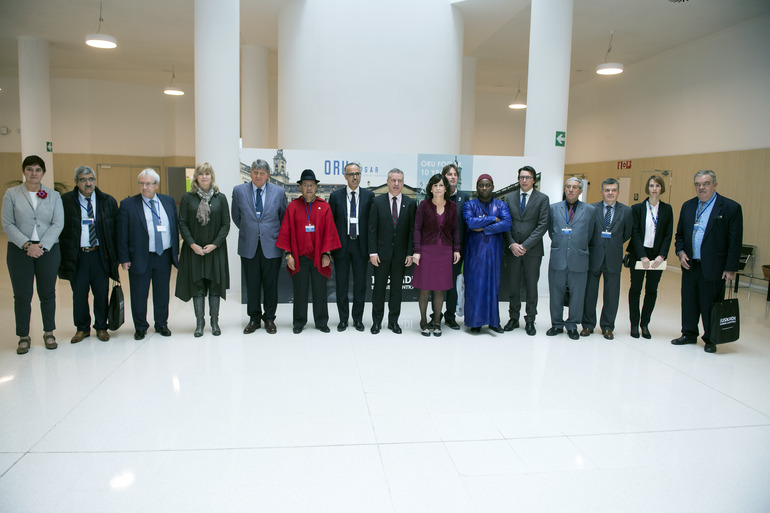 The founding principles,  agreed ten years ago, have been reaffirmed and include snsuring the regions are heard in the global world

Lehendakari Iñigo Urkullu, the Basque Premier, opened the World Forum of Regions, which is being held today and tomorrow at the Europa Congress Palace in Vitoria-Gasteiz, as part of the annual assembly of the United Regions Organisation (ORU Fogar). This entity is celebrating its tenth anniversary and its objectives include ensuring that the voice of intermediate governments is heard in the international arena and drivjng a global policy of balanced development and territorial cohesion. The Lehendakari wanted to use this opportunity to pursue the international commitment and vocation of the Basque Country.

Over a hundred representatives of sub-state governments of Europe, Asia, Africa and the Americas, as well as from region associations, will meet during the forum. Along with the Lehendakari, the Basque Government's Secretary for External Action, Marian Elorza, the ORU Fogar Chair and, in turn, the President of the Council of Rabat-Zalé-Zemour, Abdessamad Sekkal, the ORU Fogar Second Deputy Chair, Leyre Madariaga, and the general secretary, Carlos Llorens, also took part in the opening session.

This tenth anniversary will also be the opportunity to analyse the work by the forum during those years, reaffirm the objectives included in its Marseille founding declaration and explain new focal points of action for the future. The final conclusions arising from the discussions in Vitoria-Gasteiz over these two days will be the basis for the ORU Fogar strategy for the coming years.

The Lehendakari expressed his satisfaction with the progress made over the ten years and the enthusiasm to "continue advancing".  He also reiterated the founding principles such as the regions being heard in globalisation, organising rules of strategic governance that include non-state levels and foster cooperation between participating regions. "We all know that we must continue working together to showcase our role in an increasingly more open and global world," he added.

Lehendakari Urkullu wanted to use this opportunity to pursue the international commitment and vocation of the Basque Country. As he pointed out, the Basque Country has its own presence in 76 countries of the world, takes part in 75 international networks and has seven international strategic partners. Furthermore, he stressed the updating of the Euskadi-Basque Country 2020 strategy, preparing the "Basque Vision on the Future of the European Unoin" document and implementing the 17 Sustainable Development Goals of the UN Agenda 2030 among the measures that the Basque Government is currently deploying.