4,000 people a day to use the future Hospital Universitario de Álava 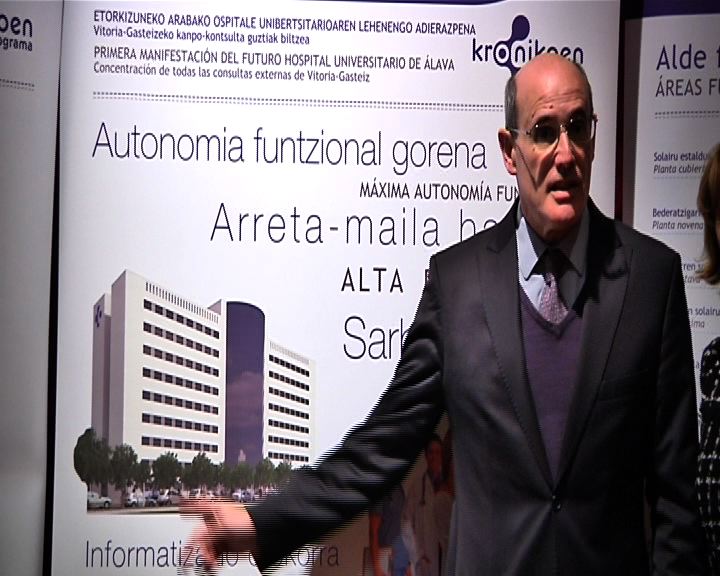 The first step has been taken for the future Hospital Universitario de Álava (Álava University Hospital) to be operational in autumn 2013. The Basque Government's Minister of Health, Rafael Bengoa, has unveiled the details of this new building that will be the main outpatient centre in Vitoria and will include new specialist areas, such as Nursing, Plastic Surgery, Genetics or Reproduction. The centre is expected to deal with around 460,000 medical appointments per year and around 1,800 consultations per day, and will involve an investment of over 67 million euros.

In 2009, the Specialist Care departments at the Santiago and Txagorritxu Hospitals dealt with 546,390 outpatient consultations in total. Thirty-nine per cent of the patients were seen by services or units at the first hospital and 61% at the second. The fitness for purpose of the outpatient premises was not the same at both centres and the Txagorritxu Hospital facilities were particularly poor. Over the last twelve months, the number of initial outpatient specialist care consultants increased by 3.54% and the follow-up consultations by 15.03%. Off-site consultations accounted for 21.76% of the total outpatient activity in Vitoria-Gasteiz. Four specialist areas (Orthopaedics, Dermatology, Ophthalmology and Gynaecology) dealt with 70% of outpatient care. It was therefore decided to continue to offer off-site services in the four areas. Consultations will be available at the city's health centres as well as at the future Outpatient Centre.

Initially planned as the Outpatient Centre at Txagorritxu Hospital, the new building will be the first section of the future Hospital Universitario de Alava to be up and running. It will be the first centre that consolidates the services that are currently available at both the Santiago and Txagorritxu hospitals.

The future centre will deal with a significant daily flow of patients, relatives and/or carers. The centre is expected to process 460,000 medical appointments per year and around 1,800 consultations per day, as demand will fall due to the ongoing implementation of new technologies, distance consultations and telemedicine. The facilities will be used by 3,500-4,000 people every day, not including the health care professionals working in the different departments.

The operational plan and architectural project seek to achieve maximum operational autonomy and one-stop care. People, including patients, relatives and health care workers, are the core area underpinning both concepts.

The design ensures that the building has its own entity and is easily identifiable, as befits a centre offering such amenities. The building has been designed as a clear and compact piece, consisting of two symmetrical parallelepipeds, where patient care is provided. These are linked by an unusual element, a glass cylindrical body, which is the entrance and enables the vertical flows to be organised and distributed. The new building will be iconic and easily recognisable from the new urban layout surrounding the complex that will house the Outpatient Centre at the future Hospital Universitario de Álava.

The total area used to provide patient care will be 16,380 m2, not including the areas to be used for future expansions of the service.
The total surface area of the building will be 20,500 m2.

The Outpatient Centre will be the first section of the future Hospital Universitario de Alava to be up and running.

- The centre seeks to be rather more than the total services already offered at the outpatient departments of the Santiago and Txagorritxu hospitals.

- The emphasis will be on maximum operational autonomy and one-stop care. Additional tests needed to establish an early diagnosis and the ones generally required by outpatients will be provided.

- The needs of the patients are solved in a single building, even on a single floor, without the patient needing to move to other care facilities. The patients will leave with all their administrative formalities completed (appointment management, care order application, etc.,)

- The centre boasts new specialist areas such as the Nursing, Plastic Surgery, Genetics or Reproduction departments.

- A user-friendly and efficient internal system has been envisaged to handle the large volume of people that will use the building (3,500-4,000 each day).

- Surface area has been reserved for the centre to expand (12 consultancy rooms and a full floor) to meet future needs.

Formalities, bidding, awarding of the contract, start of the building work
May 2011
Building delivered
September 2013
Enters into service
October-November 2.013