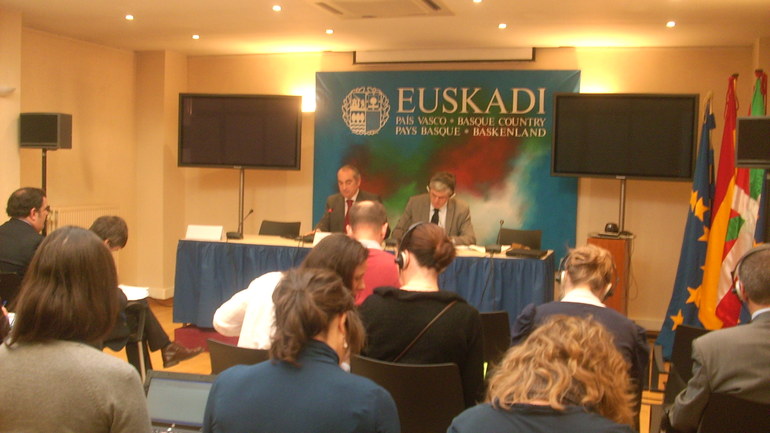 The Basque Government's Minister for Housing, Public Works and Transport, Iñaki Arriola, and the Senior Vice President of the Aquitaine Regional Council, Bernard Uthurry, chaired a meeting in Brussels of Spanish and French regions of the Atlantic Arc to set up an interregional network of public-private stakeholders to boost and promote the Atlantic Freight Rail Corridor.

Following on from the preliminary meetings that began in spring, this session was the initial contact with the European institutions that will culminate with the official presentation of the project for the European Atlantic Area program in February.
The aim of this initiative, under the aegis of the Basque Government and the Aquitaine Government, is to create a stable legal instrument or structure for the partnership to ensure that common and lasting strategies can be established to achieve:

- A strong voice and presence for the Atlantic Arc in Europe.

- An intermodal rail corridor to create a multimodal, interconnected and first-rate single rail system along the Atlantic Arc.

- A complementary project to other initiatives for economic and commercial development.

- A project when the emphasis is on the integrated involvement not only of the Atlantic Arc authorities and institutions, but also of society as a whole and of professional stakeholders, including, logistic platforms, companies from the Transport sector, road, maritime and rail operators, chambers of commerce, professional associations, universities and associations.

Today's session was attended by representatives from the Basque Country and Aquitaine, Loire, Navarra, Asturias, Cantabria, Galicia, Aragón and Castilla León. Other Spanish and European regions, particularly from Portugal, have indicated their interest in participating in the project.

Minister Arriola stressed that there was a high degree of consensus between the regional representatives to boost the corridor and it had been positively assessed by the representatives of the European Commission.

According to Minister Arriola, the development of this corridor will involve fostering investment to develop and improve the rail network, coordinating the planning and implementation of the different measures and guaranteeing the interoperativity and connectivity of the networks, rolling stock, services and operators.

Arriola pointed out that the Atlantic Arc needs to become a geo-strategic benchmark that actively contributes to the economic development of the European Union. Meeting this objective is precisely what has driven the Atlantic regions to boost the initiative unveiled in Brussels today.

The aim is to showcase a 2000-km rail corridor that runs through European states and regions where nearly 65 million inhabitants live.

The corridor will also interconnect thirteen ports along the Atlantic coast between Portugal and the Netherlands. This will increase the business opportunities of the ports and connect the different logistic centres in their catchment area. A sustainable transport strategy with a much smaller impact on the environment will also be developed.

The Atlantic Arc regions contributed around 2 billion euros to the GDP of the European Union in 2007, which gives an idea of the current economic scale and the importance of this geostrategic area of Western Europe. "This highlights why we must claim our place in Europe as one the core areas with the greatest potential of Europe," stressed Arriola.

The development of a network to promote the Atlantic Arc will also involve standardising this strategic axis with the priority axis of Central Europe and the Mediterranean, as well as facilitating the transport and connections towards northern Europe, the United Kingdom and Morocco.

As Ernesto Gasco, the Vice-Minister for Transport, pointed out, the route map for the coming months envisages the presentation of the network to all the political institutions and rail authorities to convince them of its priority, need, profitability and interest. The rail authorities will be informed of the necessary measures to be implemented in the corridor and the authorities will be asked to comply with quality and delivery dates envisaged in their plans and programs. The emphasis will be on highlighting the economic and technical feasibility of the freight rail services in the corridor, disseminating the socio-economic benefits of the corridor among society as a whole and working with other similar networks, in particular, those connecting Western and Eastern Europe.