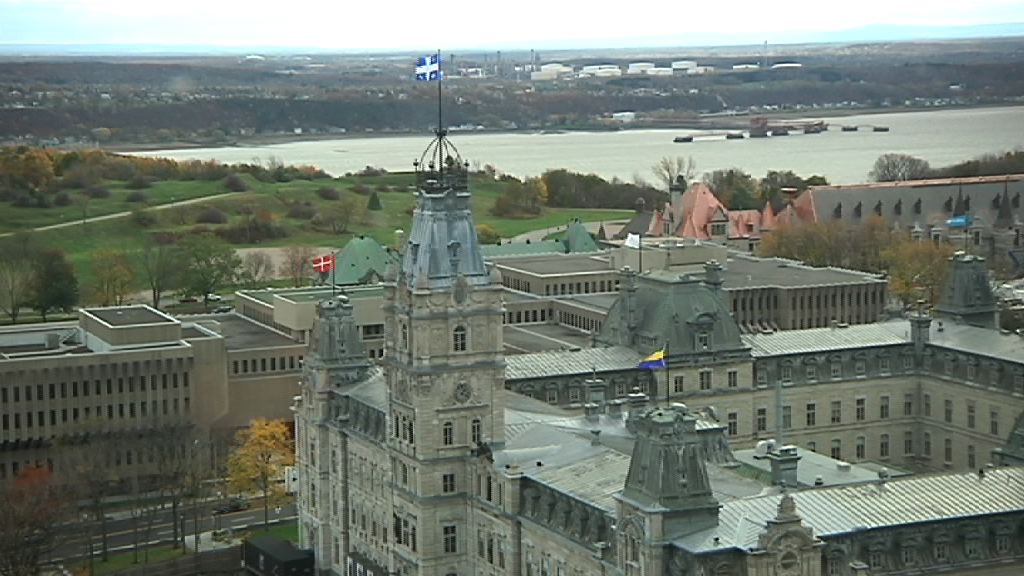 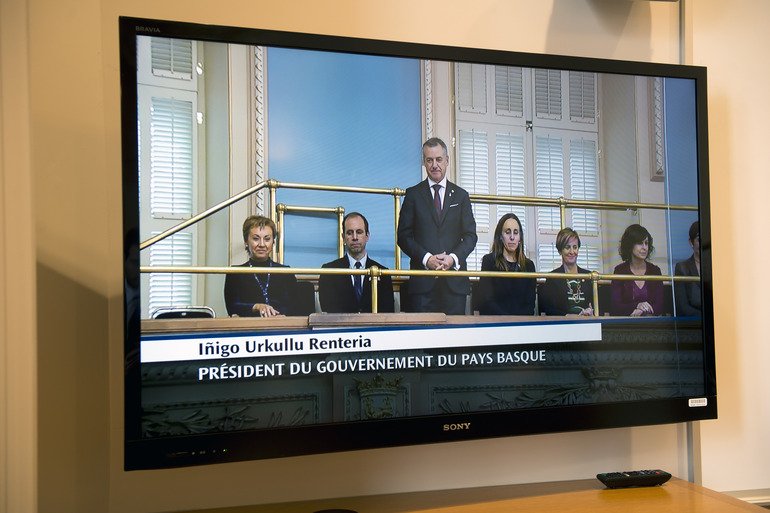 This afternoon, Lehendakari Iñigo Urkullu, the Basque Premier, visited the Quebec National Assembly on whose roof the ikurriña (Basque flag) was flying. The delegation led by the Lehendakari was welcomed by the Speaker of the National Assembly, Jacques Chagnon, who introduced all the parliamentary members to the Lehendakari during the plenary session. During the afternoon, the Lehendakari held meetings with Speaker Chagnon; the leader of the opposition, Jean François Lisée (Parti Québécois); a member of the opposition Coalition Avenir Quebec, Benoit Charette; and the Minister responsible for Canadian Relations and the Canadian Francophonie.

During the visit, the Lehendakari, accompanied by the Minister for Economic Development and Infrastructures, Arantxa Tapia, and the General Secretary for External Action, Marian Elorza, had the opportunity to visit the Parliament building and to sign its Gold Book. The Lehendakari's entry in the book thanked the parliament for the welcome that "helps to strengthen the ties between the Basque Country and Quebec".

According to the Lehendakari, this visit has served to discover Quebec's social, institutional and political reality. The Lehendakari stressed that the meetings had shown the "democratic culture based on the deep-seated political dialogue in Quebec and Canada". It is a culture that takes heed of a democracy and covenant concept in such a way that it raises the possibility of expanding the legislation to embrace the legitimate aspirations of the citizens.

During his time at the Parliament, the Lehendakari met with the Speaker of the National Assembly, Jacques Chagnon, belonging to the Liberal Party, and subsequently with the Leader of the Opposition and member of the Parti Québécois, Jean François Lisée, along with the Avenir Québec party member in charge of international Relations, Benoit Charette.  The round of meetings ended with the one with the Minister responsible for Canadian Relations and the Canadian Francophonie, Jean-Marc Fournier.

The Quebec National Assembly is the name of the legislative power of the province of Quebec. It comprises 125 members that are elected for a maximum period of 5 years. Early elections were called in April 2014 and were followed by the 41st parliamentary term.

Tapia's meeting with the Deputy Premier of Quebec

Tapia met with the Deputy Premier of Quebec, Dominique Anglade, and started work on implementing the MOU signed by the Basque Country and Quebec.

The autonomous vehicle and SME financing instruments will be the initial lines of cooperation between both governments.

During the Basque delegation's time at the Quebec Parliament, Minister Arantxa Tapia met with the recently appointed Deputy Premier of the Government, Dominique Anglade, who is in turn Minister for the Economy, Science and Innovation and Minister responsible for the Digital Strategy.

Both institutional representatives analysed the way of addressing the implementation of the innovation and economic contents, set out in the MOU signed by both governments.  They also shared information about the relevant strategies regarding business digitalisation and to support SMEs to make them more competitive.

The most interesting initiative was the one related to power, batteries and the development of new technologies linked to the autonomous vehicle. They likewise discussed a Quebec Government fund to invest in the capital of companies and to finance SMEs. This project could be a benchmark for the fund that the Basque Government is currently designing.

Tapia and Anglade agreed to explore possible partnership channels in the context of the MOU signed by Lehendakari Iñigo Urkullu and the Premier of Quebec, Phillipe Couillard.

Furthermore, Minister Tapia told the Deputy Premier about the Basque companies set up in Quebec that, in addition to those of the energy sector, include the BTI Biotechnology Institute from Álava, or Salto Systems, Fagor Automation, Ulma Construcción and IDOM, the engineering firm, all from Gipuzkoa. She also pointed out the existing relations between the business associations of both countries in the aeronautical field.