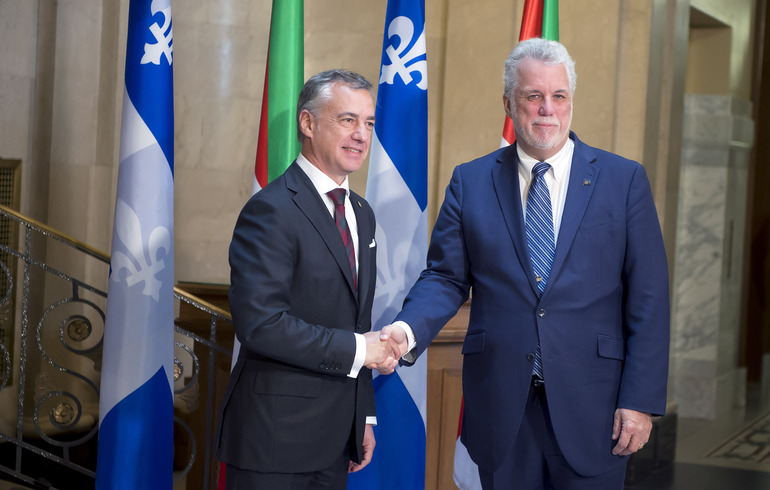 The Lehendakari and the Premier of Quebec have signed a partnership agreement in areas including the environment, culture, the economy and innovation

During the second day of his official visit to Quebec, the Lehendakari met with the Premier, Philippe Couillard, and both leaders signed a Memorandum of Understanding. Quebec thus joins the Strategic Alliance Network that the Basque Country is setting up and which comprises leading regions from around the world. Both parties thus seek to further bilateral relations in areas such as culture and heritage, economic development, innovation, climate change or inclusion and interculturality policies.

After spending the first day of its official schedule in the city of Montreal, the Basque Delegation led by the Lehendakari travelled to Quebec to meet with the Premier. The Lehendakari, accompanied by the Minister for Economic Development, Arantxa Tapia, and the General Secretary for External Action, Marian Elorza, went to the seat of the Quebec Government where they were welcomed by Premier Couillard. After signing the Visitor's Book, representatives of both governments held a meeting. At the end of the meeting, both leaders appeared before the media.

The Lehendakari ended by thanking Premier Couillard for his welcome and interest in sighing the Agreement. "We share a history of a growing relationship and, above all, a way of governing based on collaboration and cooperation," stressed the Lehendakari, who said he is totally convinced that this agreement will benefit the citizens of Quebec and the Basque Country. The Lehendakari referred to Quebec's institutional model saying that the Spanish State's recognising the plurinational reality of Quebec would be important. In this regard, in the same way as Quebec, the Lehendakari would like the Basque Country to be able to decide its future in a legal, agreed way and with guarantees.

The Lehendakari stressed four areas of the partnership agreement:

Environment: fighting against climate change and to support the environment. Partners in The Climate Group.
Culture and Heritage: Protecting and promoting the diversity of the cultural expressions of the UNESCO and linguistic policy.
Culture is at the centre of Quebec and Basque Country policy. The Identity-Culture and Language duality allows us to showcase ourselves in the global world with our own personality. We pursue the wealth of cultural diversity.
Economic development and employment, investments and commercial opportunities.
The signing of the trade and economic global agreement (CETA) is an opportunity to further the relations between Quebec and the Basque Country, Canada and Europe.
The Basque Country can be gateway for Quebec to the European Atlantic gateway and Quebec to North America.
Innovation as the driver of the economy and external outreach. Joint participation in large international consortiums, such as Horizon 2020. Smart specialisation in Energy, Advanced Manufacturing and Biosciences / Health.

As the first consequence of the cooperation between the Basque Country and Quebec, the Lehendakari and the Premier witnessed the "Dantzaz" MOU, which will implement a studio and residency exchange programme for artists in the field of contemporary dance. The signatory authorities of the agreement are Gipuzkoa Provincial Council, Tabakalera and Dantzaz, on the one hand, and the Quebec Conseil des Arts et des Lettres and the Montreal École de Danse Contemporaine, on the other side.

Quebec is considered a priority partner in the Euskadi-Basque Country Internationalisation Framework Strategy 2020.  That status is down to its linguistic and cultural diversity, its commitment to innovation and climate change, along with its ties with the Basque Country. This agreement means that Quebec will join the Basque Strategic Alliance Network made up of 6 world leading regions: Aquitaine, Bavaria, Flanders, Querétaro, Jiangtsu and Cundinamarca.

When asked about the current situation in Catalonia, the Lehendakari said the step taken by Puigdemont regarding the elections was important: "approve the regional elections convened for 21 December when he calls for respecting the outcome of those elections and also calling for the Spanish Government to do so".