Embed video
Download mp4 video set (zip)
The Lehendakari believes that Europe should intervene to respond to the national aspirations there Source: Irekia 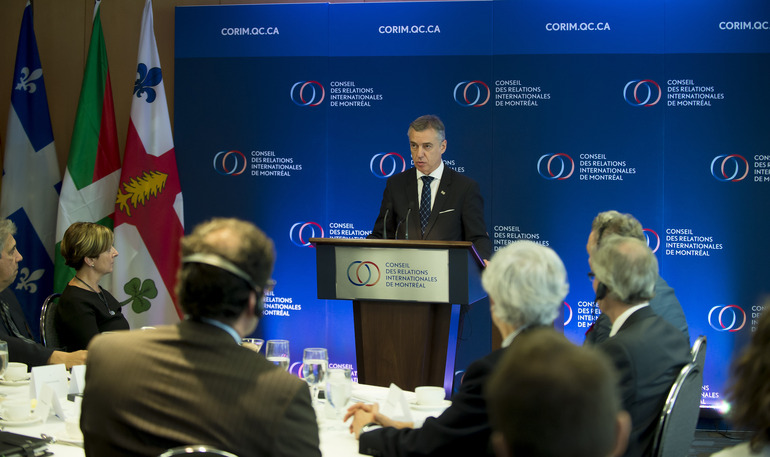 During his visit to the Montreal Council on Foreign Relations (CORIM),  Lehendakari Iñigo Urkullu, the Basque Premier, called for the recognition of the Basque Country as a nation within the Spanish State and the EU. Speaking of an audience of fifty or so economic, political and institutional representatives from Quebec, the Lehendakari explained that an intense debate is ongoing in the Spanish State and in Europe about how the stateless nations fit in the European framework. He therefore said he was convinced that the European Union would sooner or later have to address a "Clarity Directive" in response to the aspirations of the different nations that make it up.

During the first day of his official trip, the Lehendakari gave a speech, where he was accompanied by Minister Arantxa Tapia and the General Secretary for External Action, Marian Elorza. His speech was structured in three blocks: the political vision of Basque Self-Government and the "pact for future coexistence" project; a description of the Basque Country and how it fits into Europe; and the Basque Sustainable Human Development Model.

The Lehendakari addressed the issue of stateless nations in the European framework. Mention is often made in this context to the Scotland-United Kingdom and Quebec-Canada models. The latter is, according to the Lehendakari, “a particularly meaningful model", as it integrates dialogue, the principle of legality, the democratic principle and bilateral negotiation.

"In Catalonia or in the Basque Country, we are facing a political problem that needs a political response. The legal framework, or its interpretation, must be able to adapt to the social reality of the time when it has to be applied. I repeat that the Quebec-Canada model is a useful experience for the Basque Country. It allows the sovereignty debate to be unblocked by means of commitment to bilateralism."

He therefore said he was convinced that "the European Union would sooner or later have to address a "Clarity Directive" in response to the aspirations of the different nations that make it up".

This approach is based on the co-called "Basque way" which seeks to reconcile the democratic principle and the principle of legality. He explained that the Basque Parliament is working on a Self-Government Paper from his approach.

We believe that the way out of the territorial political maze in the Spanish State lies in the confederate relationship model. "We are going to continue working for a United Europe from its foundations, from the recognition of the Peoples-Nations that make it up," stressed the Lehendakari.

During his explanation on the Basque Sustainable Human Development, the Lehendakari pointed out that it is a model "based on social commitment". In this regard, Urkullu gave data on different aspects of the Basque Country, including education, health and social protection. The Lehendakari also stressed the commitment to strengthen the economic competitiveness of the Basque Country through the " 4-i Plan": Investment, Industry, Innovation and Internationalisation.