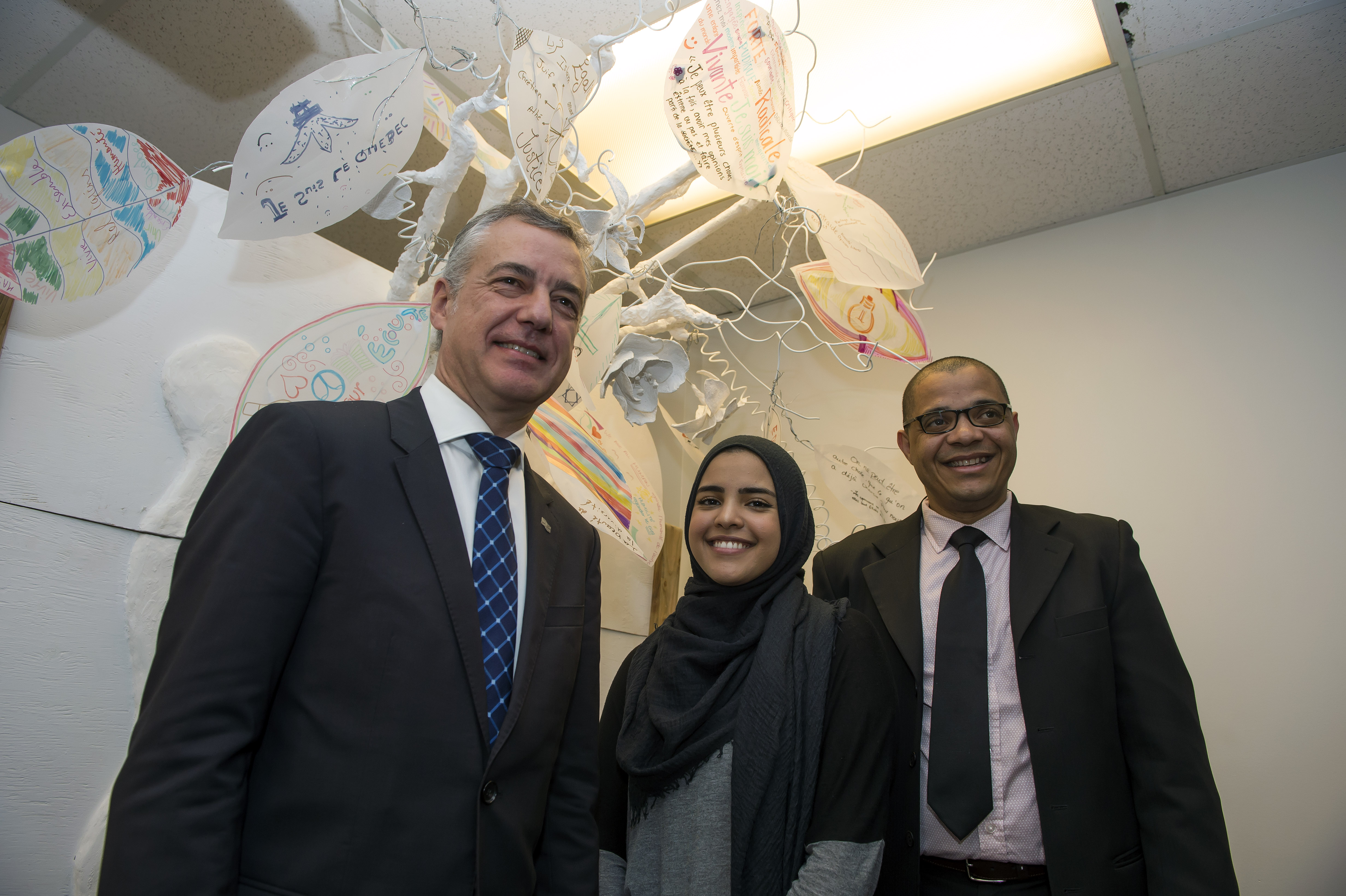 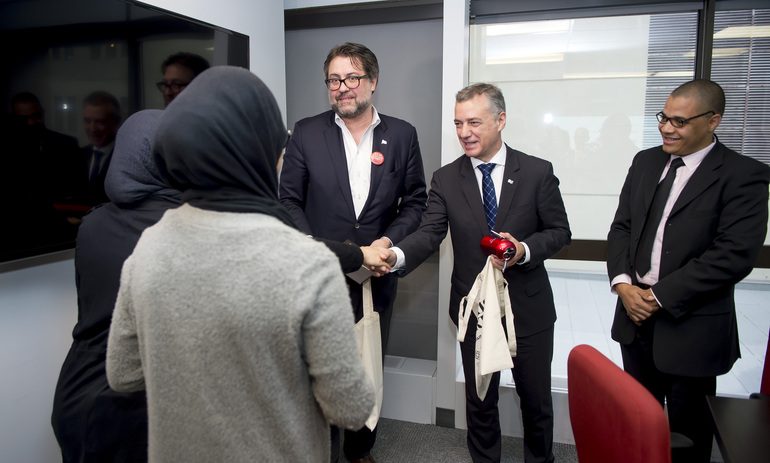 During the first day of his official trip to Quebec, Lehendakari Iñigo Urkullu, the Basque Premier, visited the ground-breaking Center for the Prevention of Radicalization Leading to Violence (CPRMV) in Montreal. The Lehendakari had the opportunity there to discover for himself the work being carried out in the field of interculturality and integration, and he was able to share some initiatives that the Basque Government is developing in this area. The Lehendakari also held a meeting with the Quebec Government's Minister for Immigration, Diversity and Inclusion, David Heurtel. At both meetings, the parties agreed to establish a partnership relationship in this regards.

During his visit to the center, the Lehendakari Urkullu congratulated its director, Herman Deparice-Okomba, on this ground-breaking initiative worldwide and likewise stressed that "prevention is vitally important”. "The phenomenon of international terrorism is global and, therefore, in addition to the political response, preventive mechanisms are also needed," he added.

In a joint appraisal at the meeting at the Center for the Prevention, the Lehendakari argued for fostering a culture and education for coexistence based on respecting human rights. The Lehendakari explained that is the Basque Government's approach to develop an socio-educational response to prevent violent radicalisation.

In this regard, the Lehendakari advanced some of the lines of action of the Basque Government against international terrorism using religion as a pretext, which will shortly be unveiled: social cohesion and interreligious and intercultural integration, security and response & preventive police action, socio-educational prevention of violent radicalisation and international & domestic political positioning.

Meeting with the Minister for Immigration, Diversity and Inclusion

That same morning, the Lehendakari had the opportunity to learn for himself about the policies in the area of Immigration, Diversity and Inclusion. Quebec is one of the global benchmarks in this field and the Lehendakari met with the Minister with this portfolio, David Heurtel.

The Basque Government, through the Coexistence and Human Rights Plan 2017-2020, has established different actions in response to the new agenda of concerns adapted to the reality of the 21st century, which include migration and cultural and religious plurality.

Responding to these issues is a priority for the Basque Government and the Lehendakari stressed that the Basque Country can learn from Quebec's experience in integrating and managing interculturality. Both governments have therefore committed to establish cooperation mechanisms to share experiences in this field.

Visit to Hydro-Québec: an opportunity for the Basque energy sector

It is the public electricity company, answering to the Government of Quebec, with the greatest production of hydroelectric power.  It employs 22,500 people and focuses its activity on renewable energies and drives the development of new technologies.

Minister Tapia there explained the capacities of the Basque Country's energy sector and the potential of the companies throughout the value chain, in order to explore new interinstitutional and business partnerships, beyond the existing ones.

Part of the meeting focused on storage, distributed generation and the impetus being given to electric vehicles. The Minister also took the opportunity to highlight the projects in which Basque companies such as Iberdrola, Siemes-Gamesa and Elecnor are immersed in Quebec.

The three Basque companies are sharing projects with Hydro-Québec. Some such examples include: Iberdrola is working on the direct current connection between wind and hydraulic energy transport networks; Gamesa has supplied different wind farms in Quebec where it has 160 jobs; and Elecnor promoted, assembled and operated a 100 MW wind farm.

Hydro-Québec has a research and innovation public institute (IREQ) which will be visited by the Lehendakari, Iñigo Urkullu.

When asked about the current situation in Catalonia, the Lehendakari expressed his concern about the lack of realism in the recognition of the problem, about the judicialization of politics and about the emotive impact.  As things have reached this point, the Lehendakari believes that all political groupings should be able to stand at the election.