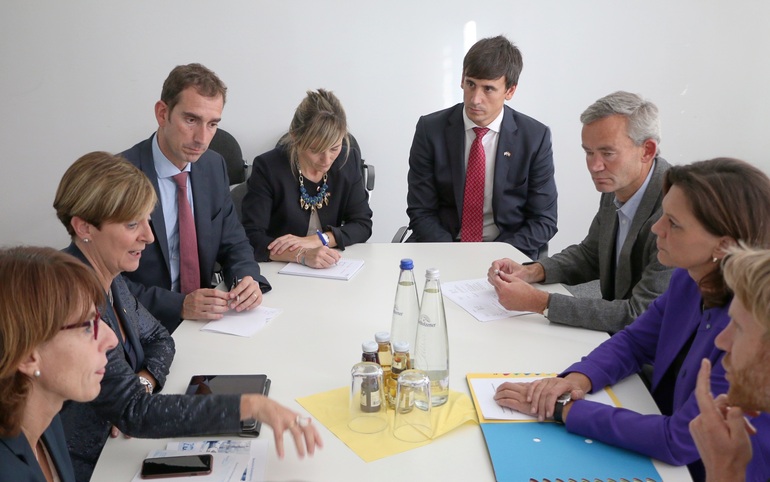 The delegation led by the Basque Government's Minister for Economic Development and Infrastructures,  Arantxa Tapia, got its trade and institutional trip in Germany underway at midday with a visit to the Bavaria Digitalisation Centre (Zentrum Digitalsierung Bayern www.zentrum-digitalisierung.bayern) and a meeting with Bavarian Minister for the Economy, Media, Energy and Technology, Ilse Aigner.

The Bavarian and Basque Governments began working closely together in 2015 and the subsequent meetings between both their representatives and their delegations have led to this work session with digitalisation and cyber security as the priority area to be addressed.

The Bavaria Digitalisation Centre (ZD.B) is a cooperation platform in business research and start-ups, which fosters the joint work of industry, sciences, associations and public institutions.

The centre seeks to consolidate the research capacities of Bavaria in the fields of digitalisation and speeding up the digital revolution.

Precisely, Minister Arantxa Tapia enquired about this aspect with the view of sharing with ZD.B, a leading centre in Europe, its models to implement digital enhancement processes in small and medium-sized enterprises.

"The Basque Country's challenge is clearly to increase our digitalisation levels in many spheres, in particular in the SMEs that run the risk of straggling behind in this transformation of the industry of the future"

Areas of specialisation common to the Basque RIS 3.

The ZD.B is a specialist centre in the branches of Connected Mobility, Digital Production, Medicine & Digital Health, digitalisation in the field of energy, education, research & culture, and now, more than ever, in cyber security.

The Basque delegation took great interest in all those areas given their proximity to the Basque Smart Specialisation fields (Advanced Manufacturing, Energy and Health).

Given the importance that ZD.B gives to cyber security as the result of the high digitalisation of Bavaria's companies, it was agreed to analyse the future partnership with the new Basque Cyber Security Centre (CVCS).

The ZD.B already has its own CERT, a certification for which the CVCS is already working and expects to be in a position to receive it in February 2018 and be officially recognised as a specialist centre internationally.

Ilse Aigner's visit to the Basque Country in March 2018

During the visit to ZD.B, the Basque delegation was accompanied by Bavaria's Minister for the Economy, Media, Energy and Technology, Ilse Aigner, with whom the Minister also held a meeting lasting around half an hour.

Minister Tapia discussed the possible interaction in the areas raised during the visit and also confirmed the trip that Minister Aigner will make to the Basque Country in spring 2018 to see for herself experiences of Basque companies and technology centres.